Embracing the Wild at 999

Locality in the heart of hectic Shimbashi

At first glance, 999 (pronounced kao kao kao) reads like a slot machine outcome at a pachinko parlor (arcade center for gambling). In reality, 999 is the newest installment of the chain across the city, the other branches being in Nakano and Shinjuku. This time the chain found a home among the bustling backstreets of Tokyo’s business district. 999 prides itself on one thing: offering an authentic Thai experience. Its vision of Thai culture revolves around outdoor food markets, where streets are packed with stalls and the sounds of clashing pans and heated sizzles underscore the excitement and anticipation in the air.

It’s a feeling that’s hard to replicate, but 999 comes close. By focusing on the details, the eatery sufficiently evokes a local vibe. The tables and walls of the restaurant are lined with silver metal sheets akin to a construction site; the cutlery and plates made from cheap plastic, appropriate for the setting. The primary color scheme and typographic wall designs of the interior serves to supplement the energetic vibe of the restaurant. On a warm evening, visitors can envision the lively outdoor seating facing the street.

Metropolis was invited to taste test 999’s latest menu item — kazan nabe (volcanic stew), which is part of the dinner course. It’s not, as the name suggests, literally cooked in a volcano. Rather, the waiter brings out a barbeque net with what looks like an ambitious middle school science fair project placed on top. Then, doused in 98 percent pure vodka, the mould is set aflame in a wispy blue and gold flurry of lights. From beneath the volcano emerges the stack of charcoaled shrimp. The shrimp is marinated in a zesty tom yum (prawn-based sour and spicy soup) paste and grilled until it’s crisp and tender. Chefs at 999 took the volcanic shrimp concept from the streets of Bangkok to Shimbashi. Perhaps this dish works because it’s reminiscent of the Benihana-style of performative dining. 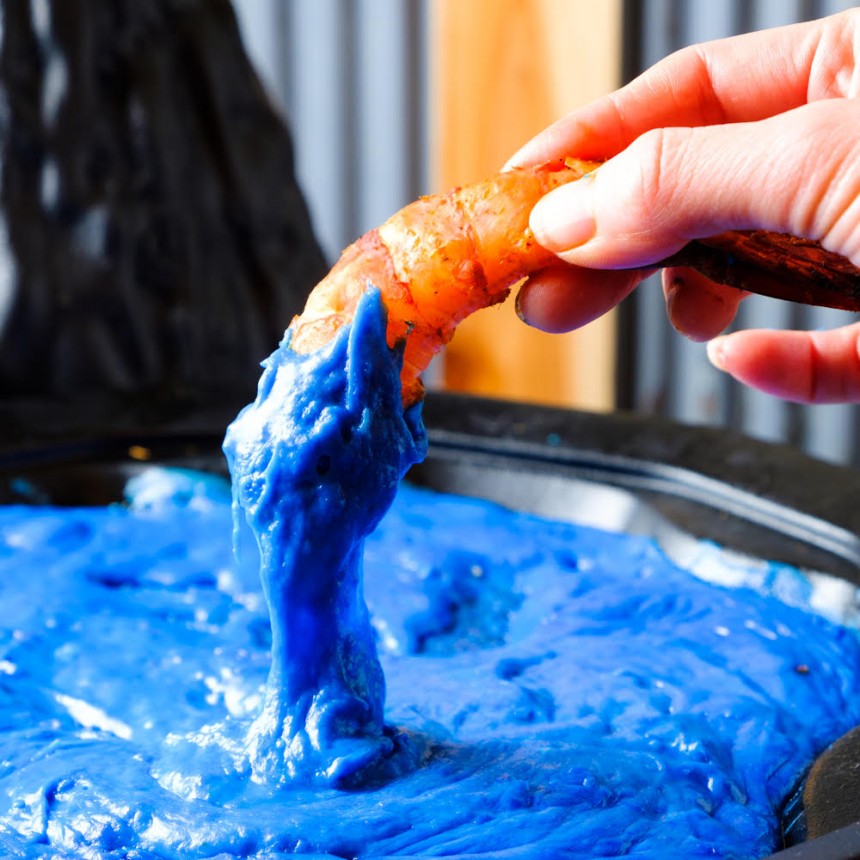 Diners may choose to add cheese to their dish, but be warned; melted cheese should be rich, creamy, have a satisfying pull to it and at least some shade of yellow. The cheese which accompanies the kazan nabe is only one of those four things. The color — a saturated cerulean hue — is achieved through a combination of food coloring and butterfly pea tea. But while its appearance may perhaps be jarring—blue being an eccentric color choice—it’s worth ordering the optional dipping sauce for the Insta-worthy display. When dipped into the cheese, the shrimp takes on a creamier tone, making for an entirely different experience.

Overall, 999 does a superb job at evoking a sense of locality within its establishment. Its decor and menu selection oozes laid-back casualness. During lunch, the eatery offers a ¥1,000 all-you-can-eat buffet. At night the drinks menu, which includes  bucket-sized alcoholic items starting at ¥999 a pop (roughly worth three drinks), beckons tired salarymen to kick back and relax. With a conversation-starter of a dish like the kazan-nabe, 999 is the perfect place to entertain small parties. In a neighborhood lined with flashy izakaya and dizzying LED adverts, 999 greets the local, rambunctious community with open arms, opting to embrace the crazy while paving the way for its own brand.