Influence from Africa and Asia

Imagine yourself in Paris in the 1920s, sitting spellbound at a performance of the avant-garde Ballets Russes, or thrilling to updates on the progress of the world’s top drivers as they race in automobiles across the deserts of North Africa. Such a flight of imagination may sound like a tall order, but it’s easily achieved through a timely visit to the Tokyo Metropolitan Teien Art Museum. Through  January 14, an exhibition titled “Exotic x Modern: French Art Deco and Inspiration from Afar” touches on these and other major events of the early 20th century while showing how French artists drew inspiration from distant lands.

“Art Deco” was a new wave in visual art that first appeared in France shortly after World War I. In contrast to the Art Nouveau style that preceded it, Art Deco featured straight lines, symmetry and repeated geometric shapes. Additionally (as beautifully demonstrated by the present exhibition), the style was inspired by ideas and imagery borrowed from Africa and Asia, which spurred French artists in new directions. The term itself was only coined in the 1960s, based on the name of the 1925 World’s Fair held in Paris: the Exposition Internationale des Arts Décoratifs et Industriels Modernes, in which the style was widely showcased.

“Exotic x Modern” presents approximately 80 works ranging from paintings and sculpture to jewelry and fashion, all incorporating some element of “exoticism.” There is, for example, an imposing chair inspired by African furniture, and a 1924 Van Cleef & Arpels brooch fashioned after a turban ornament, glittering with diamonds and emeralds. Most of the works are on loan from three museums in France – Musée des Années 30, Musée des Arts Décoratifs and Mobilier National — and are being shown in Japan for the first time. But curators also drew from noted Art Deco collections in Japan, making this a good opportunity to see what’s held by Japanese museums without multiple treks around the country. 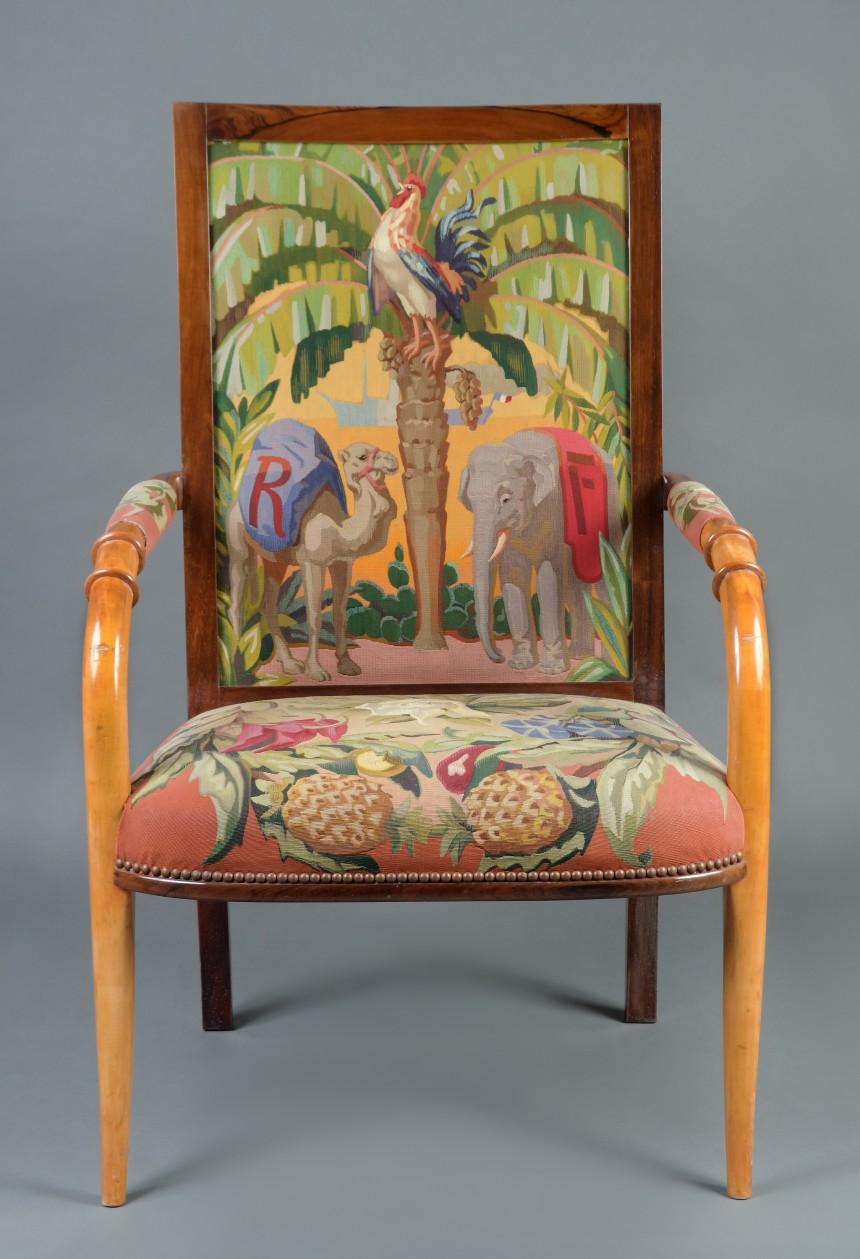 The exhibition holds special significance in this site, as it includes works by some of the French artists who contributed to the design of the museum itself: the 1933 building is an Art Deco mansion built for a member of the Japanese imperial family. The glass-relief doors at the front entrance (which feature standing female figures holding garlands) and the chandeliers in the salon and formal dining room were all made by famed glass artist René Lalique. These are permanent exhibits, but some of Lalique’s smaller works are now on display in period wood-and-glass cases. Don’t miss the molded glass plate with goldfish, which clearly draws on Chinese and Japanese art, or the covered dish with scarab design. It’s also fun to see one of Lalique’s famous hood ornaments for automobiles: in this case, the head of a woman made from pressed glass. He also made hood ornaments in the shape of birds, mermaids and kneeling nudes.

Two Japan-born artists active in Paris during Art Deco days are represented here. The first is a woman named Eugénie O’Kin, born in Yokohama in 1880 to a French silk merchant and his Japanese wife. At some point — it’s not clear when — she crossed over to Paris and became an artist, working mostly in rare and imported materials such as ivory and coral. On display is a single work, a carved ivory vase with a simple yet elegant floral pattern that is typical of Art Deco style.

The second Japanese artist is Seizo Sougawara, a lacquer artist who relocated to Europe in 1905 and worked for a time in the workshop of Eileen Gray, a noted Irish architect and furniture designer. Judging from the four works on display, including a folding screen with crudely depicted fish, Sougawara was somewhat lacking in artistry. It would seem, therefore, that his main contribution was that he taught lacquer techniques to European artists who more successfully adapted the medium to Western forms of expression, including Swiss-born Jean Dunand, the foremost lacquer artist of the Art Deco period. 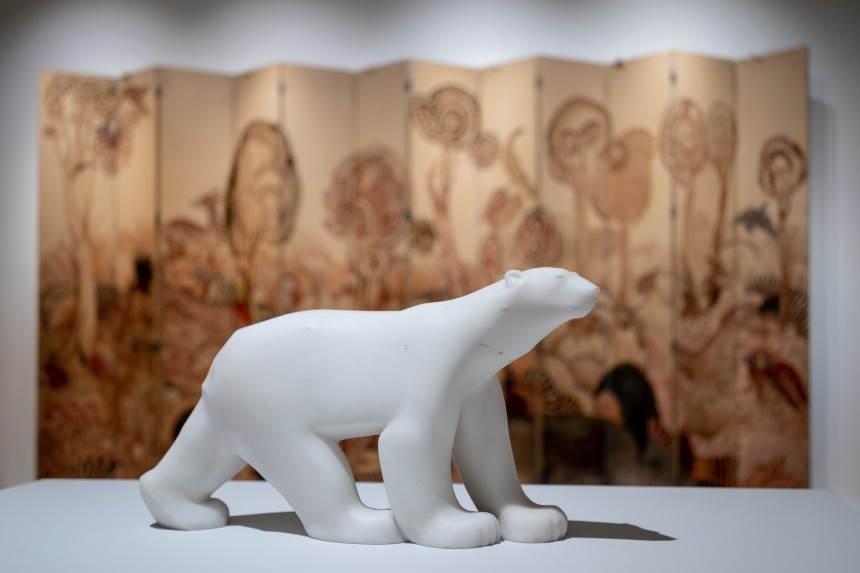 The exhibition presents two gorgeous examples of Dunand’s lacquer panels, one of which completely steals the show: a massive folding screen, three meters high and six meters long, gaily decorated with pairs of forest animals and fanciful flora and fauna represented with geometric shapes. Made for the first-class dining room of an Art Deco ship, this is a charmer that deserves a second and third look. It might be all you need to transport yourself back to the days of mink coats and champagne aboard luxury ocean-liners.

Tokyo Metropolitan Teian
Art Museum
5-21-9 Shirokanedai, Minato-ku
¥1,200 for adults, ¥960 yen for students with ID, ¥600 for seniors (65 and up) and children (15 and under) 10am to 6pm daily; last entry at 5:30pm.
Closed the second and fourth Wednesday of every month, unless a national holiday, in which case the museum will be closed the following day instead.