Ai Hasegawa is not your usual designer and artist. Originally from Shizuoka, she now lives in Tokyo after having spent 10 years in London, and two years in Boston. Hasegawa’s art encourages you to think deeply about challenges in our daily lives and bioethics, particularly with the advancement of scientific technology.

Previously an Assistant Researcher at MIT Media Lab, Hasegawa is currently working as a special researcher at Tokyo University, and later this year will present her award-winning piece, “(Im)possible Baby, Case 01: Asako & Moriga” at the Aomori Art Festival Triennale.

The idea for this piece started when Hasegawa was living in London, where open discussions were taking place around single females who wanted to freeze their eggs. On the other side of the world, in her home country of Japan, the discussion had stalled completely. She began to wonder, what was causing these silences and was it fair? So began her research. In Japan she asked who decided when women could use IVF and how? One thing she noticed immediately was that, in a committee of 12 discussing these reproductive issues, only one was female. She thought about how biotechnology research could be used ethically. Maybe in the future, same-sex couples could have their own babies. 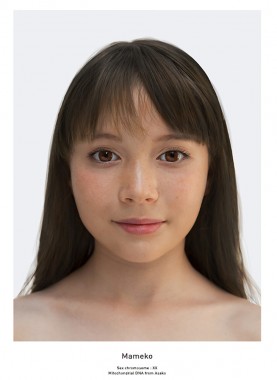 In order to create a story that wasn’t pure fiction, she used the DNA of a married lesbian couple in France. Along with some other biological sources which added additional characteristics of each partner, she mixed the DNA to produce the genetic makeup of two baby girls, siblings, and pushed it all into a DNA sequencing service. Although DNA data and manipulation is still in its early stages, she could use this data to model the babies genetic characteristics. Hasegawa then worked with a graphics company to visualise the siblings, creating a 3D model of the daughters for a series of family portraits.

Hasegawa’s work for this piece was made into a documentary and broadcast on NHK three times. Each time it was broadcast, she interacted with viewers live on Twitter. While she received mixed reactions to her work, comments from people who were connected to IVF-related issues were positive. In spring 2016, Mori Art Museum displayed Hasegawa’s portraits along with comments from the show. This year, you can view (Im)possible Baby at the Aomori Triennale in the Aomori Contemporary Arts Center (ACAC), which runs from January 20th to March 4th.

Time and again we hear that when you work for yourself, or own a company, you should stick to what you’re good at and delegate the rest. Many of us are utterly miserable doing these other tasks or can’t really do them at all, but we feel required to do everything ourselves. Japanese startup Caster Biz will help you to hire additional staff, find someone to sort your receipts, do accounts, and cover all aspects of daily secretarial, personnel, accounting and web content or development work.

The company’s network covers many sectors and people with a wide range of professional experience. They match the task requested to the skills of people in their database — all remote workers, thereby helping workers looking for flexible hours, workers in remote areas with difficult commutes, or working parents. This startup is introducing a fresh, new approach to working in Japan — a world away from the rigid salaryman life.

Another entry in the “Japanese startups to watch” group, Yappli is a service that allows you to easily develop iOS and Android apps directly in your browser. If you’re in the business of retail, especially apparel, then this service will be of particular use to you. Their 250+ customers include the the likes of New Balance, niko and…, Rakuten and Yahoo! Japan.

Yappli is helping accelerate mobile strategies for independent workers and small businesses who can’t cover the additional cost of hiring developers. To get started, Yappli is hosting seminars (in Japanese only) where you can learn directly from the company how to make high-quality apps.

There’s been quite a growth in apps over the last few years offering “do it yourself” services, mostly in the area of design. It’ll be interesting to see how these guys compete in the more technical developing space.

What else can be done to modify the look and feel of the simple pencil? Crowdsourcing website Trinus have produced a range of flower colored pencils (hanairo enpitsu). They come in a set of five, each representing one of Japan’s traditional flowers.

Japan loves to celebrate the changing of seasons. What better way to represent this than symbolising the change with flowers? Each pencil features a different flower and color — although there are two different shades of pink for plum blossom and cherry blossom, of course.

The pencils are high quality and quite weighty. Buy them for the aesthetic first; although they’re comfortable to hold, they should be used sparingly for coloring. When sharpened, they release sharpenings reminiscent of flower petals, not something you would want to lazily discard.

There are two packs, the original set of five flowers and, for winter, a metallic snowflake-themed set that is best used on colored paper. The paper will bring out the pencil’s shiny gold, silver and white hues. When these pencils are sharpened, as with the flowers, they release beautiful snowflake-like sharpenings.