For many, comic books and science fiction are the domain of fantasy, a childlike playground located far away from meaningful discourse. In Japan, manga may transcend this view in a way Western comics have not; yet for the average person, it may still seem light fare. In reality, nothing could be farther from the truth, and the philosophical ideas underlying these stories can teach us a lot about life. This is, in fact, what led renowned choreographer Sidi Larbi Cherkaoui to take on the challenges of adapting PLUTO, the award-winning manga series by Naoki Urasawa and Takashi Nagasaki, for stage in collaboration with Bunkamura. 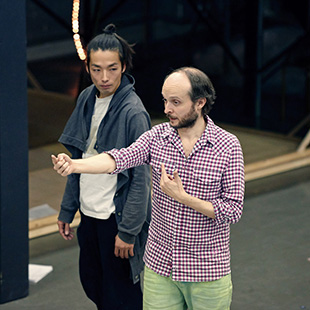 Named after the chief villain of Osamu Tezuka’s Astro Boy, PLUTO is a story of murder that follows a robot detective, Gesicht, as he attempts to solve a series of cases involving the deaths of both man and machine. But more than this, it’s a story about dealing with change, loss and finding the strength to forgive. It’s this philosophical component that attracted Cherkaoui to the story.

“[Tezuka’s] work is really always about finding ways to connect differences, finding ways to make people aware that there is some sort of bridge that needs to be built between people,” explains Cherkaoui. “There’s a lot about the characters of Tezuka that end up showing you how similar they are. Even when they’re making totally different decisions in life, they basically have been traumatized in the same way.”

Cherkaoui recounts the experience of reading PLUTO for the first time three years ago while working on his first collaboration with Bunkamura, TeZukA. “I was very touched by this story. Touched because I felt it resonated with so many elements either from my personal experience or that I saw in society. Even on a political level, there were many elements that were recognizable, and I thought I saw an extremely intelligent reflection of the world.”

From this angle, it’s easy to see how the subject matter is ripe for an engaging theatrical work. But remember: This a science fiction story involving robots, one that plays out in illustration and spans eight volumes. From a creative perspective, bringing such a story to stage is a huge challenge, but one Cherkaoui relishes given his visual mindset. 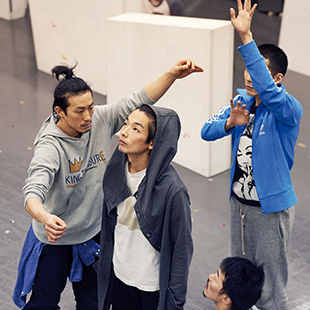 The cast of PLUTO rehearsing
(Photo by Yoshie Kobayashi)

“A lot has to do with where things are in the space and how they move,” explains the prolific choreographer. “And I think comic books and especially the works of Tezuka, but also the works of Urasawa and Takashi Nagasaki, have an appeal to me because of that—because there are all the shapes and angles, and a sequential approach, which is very different from when you’re reading a book or watching a movie. It just has its own kind of pace.”

It’s this foundation in movement that has allowed Cherkaoui to breathe life into the work of Tezuka and Urasawa with a Japanese cast, despite not speaking Japanese himself. “In the beginning, I was quite nervous because I felt, would I have enough words?” he says. “Given that I don’t speak Japanese, would I have the right kind of vocabulary that would translate in a specific way in order to inspire the actors? But actually it went quite smoothly. I think human psychology is so universal, and I think people recognize through intentions, through energy, through focus. We can see what we mean even when we don’t have all the variation possible through words. On the contrary, sometimes those words even get in the way. I think there are moments where, just by showing it in a certain way or approaching it in a certain way physically more than verbally, it actually works better.” 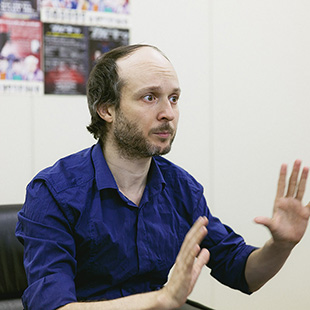 When moving from one medium to another, there’s always a balancing act between staying true to the source and taking creative liberty. When asked how he is approaching PLUTO, Cherkaoui explains, “I end up really trying to stay as true as possible to the actual characters I’ve met in the comic book. Because they are on stage, of course, there’s a difference because it’s a body that’s alive and that’s right there. But the energy, I really, really want to make it as close as possible to the comic book.” Not all are alive and breathing on stage, of course: Puppetry is used to bring the robots—which include the title villain himself—to life.

As for the takeaway, Cherkaoui hopes the audience will connect with the characters and the message in the same way he has. “I could speak for hours about each character because I really like them and I think they are really interesting beings, so I hope the audience gets to meet each and every one of them and falls in love with Uran, with Atom or falls in love even with Tenma or Brau 1589 because they are all very strong identities.”

Beyond the characters, the message Cherkaoui hopes the audience leaves with is the ability to forgive, which he sees as the most central point of PLUTO. “The ability to forgive, I think, is a very, very hard one. I know it’s a hard one for me. And I think, if anything, what reading PLUTO has taught me is to try and address that issue of forgiveness.”

PLUTO will be presented in Tokyo at Bunkamura’s Theatre Cocoon from Jan 9 to Feb 1, and in Osaka at Morinomiya Piloti Hall from Feb 6 to 11. www.pluto-stage.jp