A hub for drinks and quick bytes

Hackers Bar adds a new variable in what has become a monotonous bar scene in Roppongi. The first of its kind in Tokyo, the hi-tech establishment appeals to the programming and engineering crowd by fusing the joys of technology with that of libations.

The bar is situated on the fourth floor of a building whose elevator greets you in perfect English, recalling memories of futuristic ‘80s films. Opening the door, you’re greeted by an intimate setting illuminated by a fluorescent pillar behind the bar as well as the neon glare from the television and computer screens and the bountiful gizmos that surround it. The space is small but cozy: The bar seating accommodates around 15 people as, like a good web page layout, the venue has no tables. 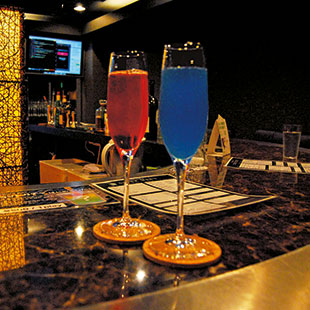 Matching the interior in intrigue is the drinks menu. The standard bar fare of nama beer and wine is a given; Hackers’ original cocktails are the key elements here, all modeled after programs and software, and utilizing ingredients popular among techies, such as Red Bull and Dr. Pepper.

However, Hackers’ mainstays are its beverages modeled after every computer user’s nightmares. The Blue Screen (¥1,080) is its most popular: A bittersweet, aqua-hued concoction mixing Hpnotiq liqueur and absinthe, created as an ode to that dreaded blue symbol of Windows failure—which in itself is a solid reason to drink. Mac users get their own beverage as well: The Kernel Panic (¥1,080) is an apple-tinged red cocktail paying homage to the rainbow wheel of death.

Those feeling adventurous may also take a chance on the “Shot Gatcha” (¥500) roulette, a small game coded by Hackers that selects a shot for you at random. Players could win anything from a shot of vodka or whiskey to a prize of one free shot of their choice—or a not-so-rewarding shot of water.

From behind the bar, owner Akihiro Nakao—doctor by day, bartender by night—says the bar was conceived under the premise of showing live programming as entertainment, having been inspired by a street musician he came across in Boulder, Colorado, who drummed on buckets.

As such, Hackers Bar also hosts various programming or tech-related events, their most popular being their JavaScript nights on Fridays wherein “hackers”—the bar’s term for highly talented or skilled IT individuals—gather to write scripts or codes. Also offered are Java, Swift and Python nights; game nights, and English TechTalks—lectures on new technology-related developments and ideas.

For lovers of technology and programming, Hackers Bar provides a framework of fun.