Visit the international terminal to travel back in time.

In Japan, the summer heat is synonymous with matsuri, or festivals. Fireworks, old-time games such as kingyo-sukui, and yukata-clad festival-goers pop up everywhere as the delicious aroma of the yatai food stalls wafts through the weekend streets. As much as the humidity wears us down, summer means long nights and an excuse to be outside in the warm air—the perfect setting for all types of celebrations.

To bring you a matsuri experience in the traditional Edo style, Haneda Airport will once again host a summer Edo festival in the airport terminal. In the same style as the Edo festival held earlier this year during Golden Week, the fourth and fifth floors of the international terminal will be fully transformed into an Edo village.

Held only during the daytime, the Summer!!! Haneda Edo Festival will take place over three days from August 28 to 30. You may see many familiar sights and performers such as the ennichi street-fair games and street performers that will transport you back to the 1600s. Cast members wandering around the festival will be fully engrossed in their parts, pointing to phones and other modern gadgets in awe. 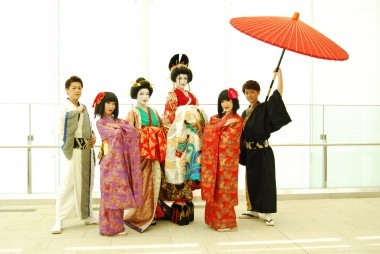 The main event at this summer matsuri is the bon-odori. This is a traditional dance that is performed during obon, a Japanese Buddhist event that honors our ancestors. Instead of carrying an undertone of mourning, obon is a celebration that welcomes home the spirits of those long gone. The bon-odori will be held twice each day, at 2pm and 6pm, and there is an original song and choreography created specifically for the Summer!!! Haneda Edo Festival.

Of course, there are many other fun events to be enjoyed throughout the day. The schedule for the main Edo stage is filled with performances ranging from traditional music to modern Japanese comedy. The oiran procession from Kaguwa, a Japanese entertainment-show restaurant in Roppongi, will be parading through the festival and ending with a dramatic show on stage. 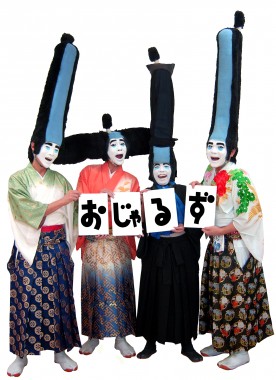 Other events on the program include a Japanese magic show and shamisen concert. Perhaps the most memorable of performers this time is the street performance group Ojarus. Their unusually long hairpieces, along with bold makeup, set the tone for an unforgettable and comedic performance, enjoyable to all ages.

While the performances are must-see moments, by simply walking around the Edo village you’ll find yourself constantly surrounded by surprises. Street performers spontaneously appear to show off their skills. Tsunemune puts on a compelling show by combining comedic storytelling with tricks such as umbrella spinning.

Ako-chan, a musician and dancer, mixes magic with sounds from two traditional Japanese instruments: the shamisen (three-stringed instrument) and shakuhachi (flute). This combination of Japanese music with Western tricks creates a highly unusual and entertaining experience.

Families can also enjoy the ennichi street fair that allows both kids and adults to experience traditional Japanese games. Among these are jumbo paper sumo wrestling, shuriken throwing, and a game in which you test your luck by choosing a string that leads to prizes. A stamp rally, where you collect stamps from around the festival, will also be in effect. Collect all the stamps to receive an original patterned tenugui towel. Many other games and events, common to Japanese summer festivals, will be found among the Edo village! 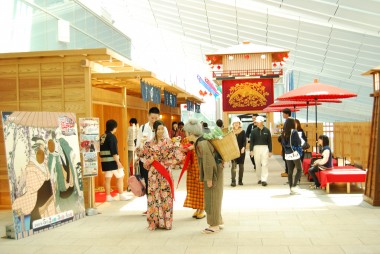 So, if you’re in the mood for a truly traditional summer festival experience, it’s worth the short trek to Haneda Airport to take part in the Summer!!! Haneda Edo Festival. Once you step into the terminal, you’ll be transported back to the Edo period for a summer you’ll never forget!