A soft realness permeates the air along the river lacing streets of Tachiaigawa. Local izakaya, homely yakitori vendors and small shotengai (traditional shopping streets) strung with streams of colorful lanterns create a small town simplicity that is part of an older world.

Imbued with the essence of a working-class Tokyo shitamachi (downtown neighborhood), the attraction to Tachiaigawa is not an impressive list of top sites — it’s a place to bathe in the feeling of something that has been lost, or is slowly seeping away in other parts of the city.

just by visiting, you can fall through a crack in time somewhere between the past and the present.

Located along the edge of Tokyo Bay in Shinagawa, Tachiaigawa was originally outside of the old city boundaries, close to the old Tokaido — one of the major highways of the Edo period. Edokko, or native citizens of the capital, of the past would have passed through the area as they made their way to and from Kyoto. But it wasn’t until 1903, when Tachiaigawa Station opened, that the area actually got its name; before then it was simply Oi Village, Ebara Province.

The hardworking seaweed farmers and fishermen who once worked among its coastal waterways may have long gone, but walking through the area, swimming in its earnestness, reveals that not much has changed here since the 1950s. Only the concrete train station and a few chain eateries bring you back to here and now. 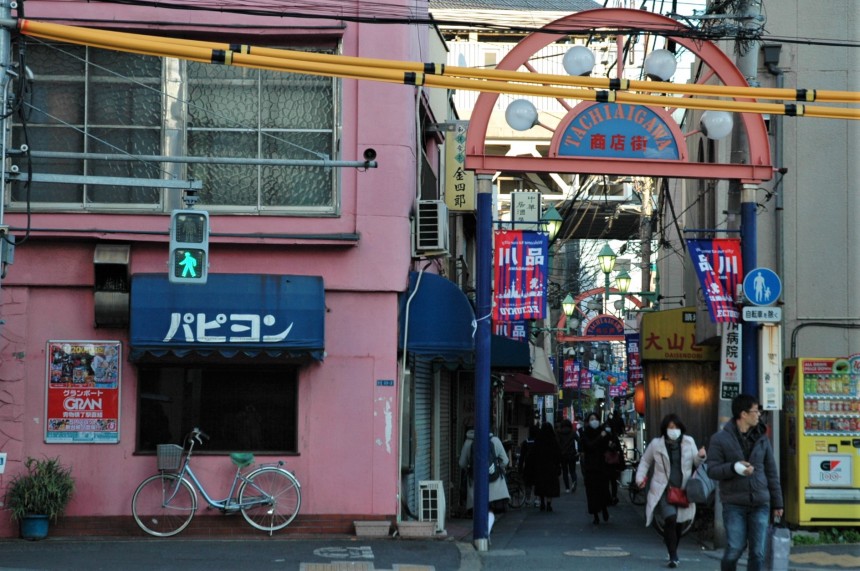 Tachiaigawa does, however, attract a crowd of visitors through the nearby Oi Racecourse which holds regular horse racing events, festive illuminations and the ever-popular Tokyo City Flea Market.

Taking place every Saturday and Sunday, the sizable secondhand market is a spectrum of sellers, shoppers and selections of items on sale. The place to go in Tokyo to unearth what goes on outside of the polished realm of skyscrapers and suited office workers, the market is a rough and ready space for bargain hunting and people watching. Its friendly stallholders are open and chatty, and there are always deals to be found. It’s a challenge to leave empty-handed.

But away from the energy of the weekend market, there is history and intriguing tales of old inhabitants of Tachiaigawa to track down.

Close to the exit of Tachiaigawa Station, pedestrians are watched over by a statue: the dignified stance of Ryoma Sakamoto. The Shikoku-born, Tosa Domain samurai was an active advocate for democracy and adversary to the Tokugawa Shogunate (1600 – 1868). Sakamoto would have spent much time at Tosa’s shimoyashiki (clan residence located outside of central Edo), which was located in the vicinity of Tachiaigawa Station itself.

Influential during the final years of the Edo period, and in the establishment of modern Japan, Sakamoto was executed by a pro-shogun group shortly before the Meiji Restoration (1868), but his vision of a country without a feudal system and caste has had a lasting impact on the shape of Japan today. 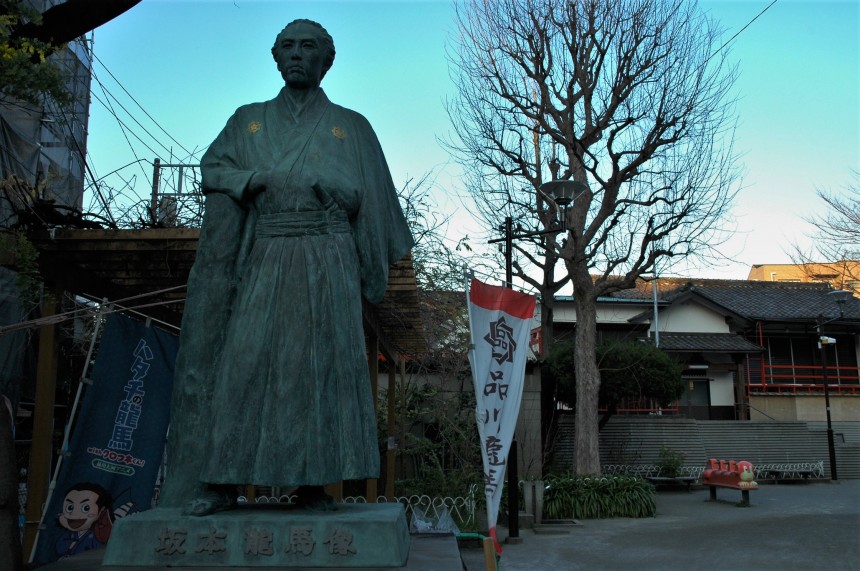 Along the water’s edge, remnants of Tosa’s legacy can be found at the Hamakawa Battery. Built by the clan in an attempt to ward off the return of Commodore Perry’s ships in 1854 (though they never made it this far), today only a single restored cannon sits in a small park. Nearby, a giant, kawaii Sakamoto adorns the side of a Shinagawa Ward sewerage plant as a reminder of his impact.

More history can be uncovered a few minutes walk from the station at Namida-bashi or “Bridge of Tears,” an ominous name that gives a clue to its grim past. In the Edo period, Namida-bashi (one of Shinagawa’s “100 Scenic Spots”) was the last point for criminals to say their final goodbyes to loved ones before being taken to be executed, just over a kilometer up the road at the Suzugamori Execution Grounds, in use between 1651 and 1871.

The surrounding scenery and atmosphere have clearly changed since, but the connotations of Namida-bashi, and the nearby execution grounds, possibly points to why Tachiaigawa has remained relatively untouched by developers. It’s thought that executions would have taken place this far from the capital to curb the “spiritual pollution” of the city. 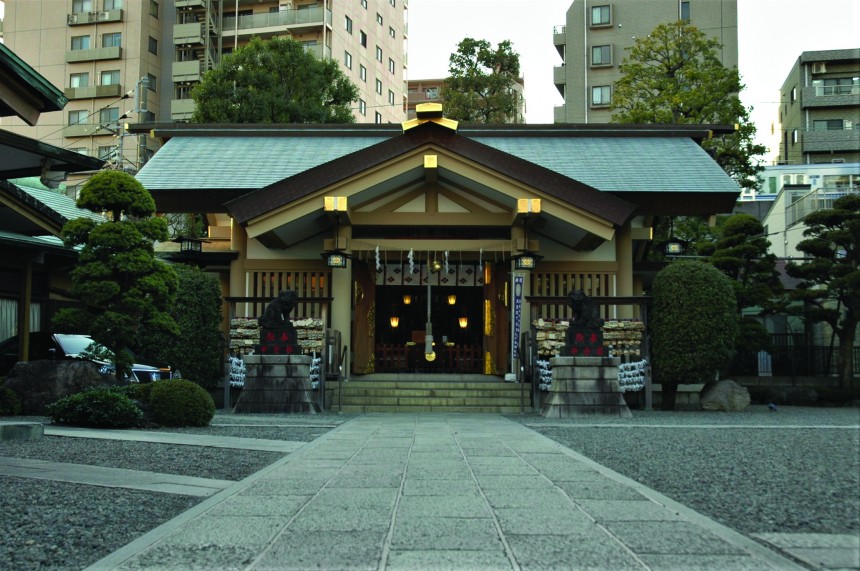 Across the bridge, the Tenso Suwa Shrine sits on the backdrop of muted low-rise buildings and the coasting trains on the raised Keikyu Main Line. Apparently established in the 12th century, the structure enshrines Fukurokuju (one of Japan’s shichifukujin or Seven Lucky Gods) and is a private peaceful space — as if almost balancing out the dark Bridge of Tears close by. It’s a place to pray for happiness, prosperity and a long life.

Away from the narrow streets, Shinagawa Kumin (“Community”) Park is a sizable recreation area: a mix of forested walks, sports courts, an outdoor swimming pool, all looped by a running track. In spring, picnickers throw down their blue tarps for hanami (flower viewing) under the numerous cherry trees at Sakura Plaza in the park’s north end.

As the evening draws in, and Shinagawa ward’s subtle goji no chaimu (5 o’clock bell) trickles through the PA system, Tachiaigawa becomes understatedly elegant. Colorful lanterns cast their glow and light bulbs flash on storefront signs. Each of the eateries billow out wafts of hard-to-resist aromas. One such, Oyama-no-Taisho, is a low-key local favorite that serves up tasty low-cost bites including a crowd-drawing medamayaki (fried egg): multiple eggs, generously sprinkled with gyofun (fish powder), atop cabbage and vegetables.

Some old-school eateries in the area declare: “English menus available” — others attempt to attract foreign tourists with signs that explain the meaning of omotenashi (hospitality). Along with a well meaning selection of tourist maps in multiple languages, the sight of these small businesses openly welcoming people gives Tachiaigawa an accessible warmth, despite it being far from a well-worn tourist spot.

Once defining the limits of old Tokyo, Tachiaigawa is now defined by Tokyo’s sprawl. It’s an old seaside stretch of heartlands where famous samurai roamed, where travelers of yesteryear stopped off, and where just by visiting, you can fall through a crack in time somewhere between the past and the present.