There aren’t many solo shows by female painters, especially historical shows. Even when there is one, there’s always a suspicion that the exhibition is being put on—at least partly—to remedy the gender imbalance. But you’re unlikely to be troubled by such thoughts at Helene Schjerfbeck: Reflections, the latest show at the University Art Museum, Tokyo, focusing on Finland’s most famous “lady painter.”

It may have been because Scandinavian countries have always been at the forefront of gender equality, but the young Schjerfbeck, born 1862, faced few obstacles in her chosen career. While Finland was officially part of the Russian Empire—as the Grand Duchy of Finland—it nevertheless enjoyed a high degree of autonomy and followed its own cultural and social norms. 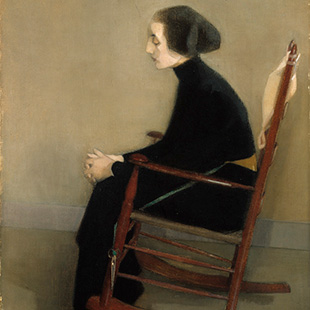 From the age of 11, Schjerfbeck was enrolled in drawing school, where a well-known artist paid her fees. By 17, she was already winning prizes, while a government grant enabled her to study in Paris. In these years, she developed a sometimes-sombre, sometimes-sentimental style of academic realism that revealed her technical talent. In later years, her style changed dramatically.

What strikes the visitor about her work is a sense of feminine intimacy combined with Scandinavian simplicity. Oddly enough, there’s a strange IKEA note to many of her paintings, with just a hint of the morose quality we associate with Swedish filmmaker Ingmar Bergman. This note is sounded early in the show with a memento mori painting of a skull, done when she was only 15.

This note never entirely goes away, and when we encounter one of her most famous paintings, The Convalescent (1888), it reverberates strongly, as we see a sickly child tending a poor-looking plant, and wonder which one will survive longer. The expression in the child’s eyes mixes dark premonitions with a still-glowing ember of hope, making it all the more poignant.

An important influence was the American painter James Whistler. This becomes obvious in The Seamstress (1905), which evokes Whistler’s famous painting of his mother. But Schjerfbeck manages to give things a new twist. The stern-looking figure of the seamstress, with her scissors hanging from her waist, connected by a ribbon, and her rocking chair counting out the hours, seems to be a clear invocation of the ancient Greek Fates—the three goddesses who measured out the life of each person by spinning, measuring, and cutting a thread.

Interestingly, this was a work from almost the exact midpoint of Schjerfbeck’s own life; she was 43. The rest of the exhibition is dominated by a sense of decline, both in artistic terms and physically.

Going with the spirit of the age, her painting becomes more streamlined and flatter—rather Art Deco-ish—while her palette becomes lighter and brighter. While still charming and occasionally effective, many of these works veer toward the cartoonish.

Her paintings also start to focus more on herself, documenting the process of aging, but also suggesting that painting is a habit of creation that the artist can only ever give up at the grave.