Will art in fashion be the new black?

Stumbling across contemporary art in Tokyo is easy. Communal areas often feature public art. The city is packed with commercial and independent galleries as well as plenty of privately owned or government-supported museums. However, if you like your art situated in a central urban hub, created by an established international artist, and with a zero yen admittance fee, one way to discover contemporary art in the metropolis is to go shopping.

Of course, it isn’t exactly new for fashion brands to cozy up with artists and their work. Yves Saint Laurent once designed a range called “The Mondrian Collection” during the sixties. More recently, Takashi Murakami produced an animated commercial to propel the sales of the world’s most counterfeited handbag. Nor is it unusual for artists to lend their name to endorse a product. Swedish vodka maker Absolut ran an entire advertising campaign based on signature styles of artists for years. What is new in Tokyo is a rise in the number of fashion stores hosting exhibitions.

It makes sense. The artist’s work will be better known while the luxury brand is endorsed by association. But is this trend merely an extension of branding or do these commercially savvy interventions offer new exhibitions worth seeing in their own right? Here’s a roundup of some of the shows in shops in Tokyo, past and present: 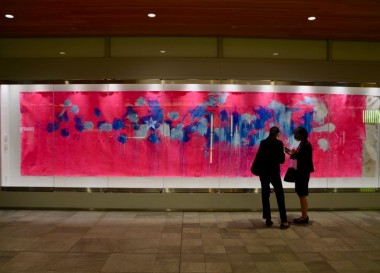 Japanese artist Ushio Shinohara has been creating paintings with boxing gloves since the late fifties which was made memorable in Zachary Heinzerling’s documentary Cutie and the Boxer (2013) – a film about the relationship between the married artists Ushio and Noriko Shinohara. Some of his work is found in Shinjuku’s NEWoMan ART wall. Situated near the new South Exit of JR Shinjuku, this department store window has a rolling program of art that changes monthly. 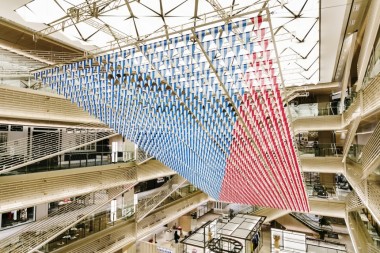 When Ginza Six opened in 2017, the inaugural artwork commissioned for the shopping complex was a cluster of red and white illuminated pumpkins made by the celebrated Japanese artist Yayoi Kusama. As the second artist to utilise the atrium, the French conceptual artist Daniel Buren has responded to the space by dividing it up with an angled canopy of red and white, and blue and white striped flags. From spots to stripes, Buren’s “A flock of starlings” (2018) creates a striking spectacle visible from each of the balconies.

Also in Ginza Six, on the sixth floor, is a gallery – The Club. On display until July is a solo exhibition by the Japanese artist Kishio Suga. As one of the key artists associated with a group of artists called Mono-Ha (or the school of things), Suga works primarily in installation, arranging understated media with a truth-to-materials approach.

At Hermès in Ginza is the show “Adjective to your presence” by the Romanian artist Mircea Cantor. Housed within the iconic glass brick building is a major solo exhibition that runs until late July. Working within the traditions of Marcel Duchamp, Cantor employs diverse media to question our sense of certainty. Established in 2006, the art program at Hermès in Ginza has boasted an impressive range of contemporary artists, from Japan and overseas, with around three exhibitions a year. 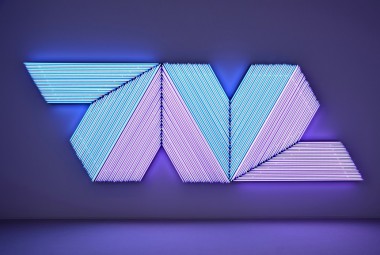 On show at Espace Louis Vuitton Tokyo is “Medley” by French appropriation artist Bertrand Lavier. Established in 2011, Espace has run exhibitions by internationally acclaimed artists including Dan Flavin, Pierre Huyghe and Min-Jeong Seo. Running until September, “Medley” offers a disparate collection of objects and paintings including this neon sculpture “Empress of India II” (2005) made after Frank Stella’s work of the same name.

For anyone interested in the work of the late American pop artist Keith Haring, there is a special exhibition of his work planned to take place at Omotesando Hills this summer. 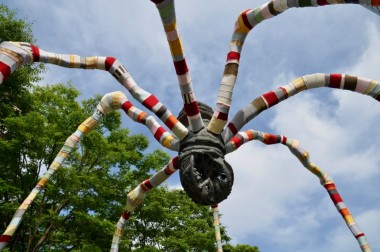 A recent favourite that embraces both art, shopping and fashion is Magda Sayeg’s yarn bombing in Roppongi Hills. Produced to celebrate the shopping complex’s 15th anniversary this May, the artist knitted leggings for Louise Bourgeois’ giant spider “Maman” (2002). Known for her use of vivid colours, Sayeg chose a muted palette for an intervention that coincided with Roppongi Art Night.

A cynic would probably argue that this trend for art in the context of fashion is merely a tactic to encourage shopping. And they would be right, but as a growing phenomenon that actively supports the production and reception of art, that engages with viewers whom might not have sought out contemporary art otherwise, that brings about new connections and collaborations, that produces events with giant spiders wearing leggings, can surely only be a good thing. Let’s hope this is the new black.