For those abroad with dreams of making it big in Japan, it’s gratifying to find someone who actually has—and by working their way up. Especially in fashion, it’s more often the case that an already-established designer breaks into the Japanese market from afar, rather than from within. But times are changing, and more students are flocking to study in Tokyo, aiming to become successful in the city. However, these pathways into the Japanese fashion scene are a recent development, with even the most prestigious fashion education institutions only opening their doors to non-native Japanese speakers in the last couple of years. 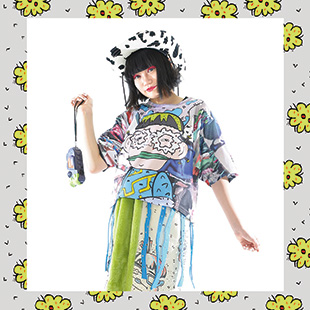 Hailing from Oklahoma, artist and designer Brandon Reierson is a grassroots trailblazer for those wanting to work their way into Tokyo’s fashion scene. Having done his time as an English teacher while working on his brand, and now with stockists in Osaka and Tokyo—as well as a space in Parco Part 1 Shibuya and Parco Fukuoka running until July 9—his story is proof that the dream can be a reality.

The inspirational rise is at odds with his shockingly comical aesthetic: half American ’90s nostalgia, half Ura-Harajuku, aggressively busu-kawaii, his work is designed to have you stopping in your tracks, and Tokyo seems to be taking notice. An illustrator by trade, Brandon could often be found sketching on the streets of Harajuku, which have inspired his creation of original fashion subjects. Now he’s made his illustrated clothes a reality under his brand Lactose Intoler-Art, a name derived from his own allergy to dairy that features heavily in his own daily life in Japan.

Metropolis caught up with the young designer to hear more about his stance on Tokyo fashion culture, and how he went from admiring it, to making it.

What inspires your artwork?

Childhood nostalgia-meets-underground Japanese street fashion culture! I love seeing fashion that is used as a way of personal self-expression. In particular, I am inspired by the way kids in Tokyo mix and match what they’re into at the moment with their own personal styles. Whether that is layering of ideas, plays on color and texture, or old grody vintage mixed with the avant-garde, it is incongruous, but it tells a very personal story. This kind of fashion really speaks to me and my work is reflective of this very personal obsession people have with fashion.

I apply the same personal approach to my art, and my illustrations have an undeniably nostalgic early ’90s element from my childhood bleeding right through them, combined with what I find inspirational from the current street scene. Some people have described them as Nickelodeon’s Rugrats-meets-the backstreets of Harajuku!

How did you make the jump from drawing street style to making it? 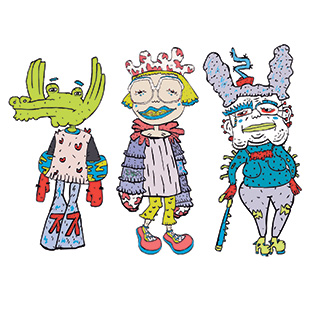 I’ve always been an artist, and have always been doodling things, whether it was Koopa Kids from Super Mario Bros. at the age of four, or the exotic chickens I raised in Oklahoma during my awkward pre-teen years … Yes, it has always been there.

As for actually making street fashion, just like everything else I ever collected or obsessed over, I started out genuinely interested in it to the point where it just started oozing out through the work I created. I think as I grew older, my art became a bit more reflective and expressive of my past, and after living in Tokyo for a while, a lot of the drawings I started to make were what I had wished I was actually seeing on the streets, but perhaps wasn’t there. From there, it was natural to take my drawings of fashion I wished I was seeing, to actually making it for myself. It all comes full circle when I see someone on the street wearing my work and they inspire me to get back to drawing.

f would hope that this kind of working transparency translates to the people that follow my work now. I think one important thing I want to express through Lactose Intoler-Art is the idea of mixing and matching things from different sources that all resonate personally. So I am thrilled when people find a piece that means something to them. Whether it’s just a nostalgia trip or something they want to wear that represents their take on fashion now, they get something out of my work, but they bring a bit of themselves to it too.

How did you manage to start getting stocked in Japan?

Before living in Japan, I had visited Tokyo several times and connected with a lot of small shop owners as a customer. I would always come back and buy new things, even vintage that I could find for three dollars in a thrift store back home, because I was so fascinated with the way that the same piece of clothing was reinterpreted in a new way here in Tokyo. Naturally, over time, I got to know some of these people a bit more personally, and I asked the owner of my favorite store if he’d be willing to stock my work years later—and he did! That was one of the most exciting days of my dairy-free life!

What advice do you have for people abroad wanting to become a designer in Tokyo? 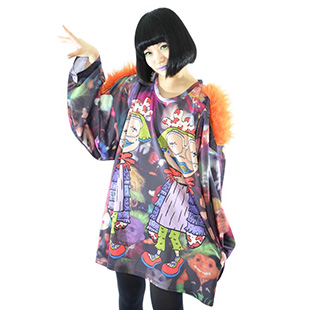 I would say know what you love, and know what you’re passionate about. Be fancy-free in that sense, but you also have to be realistic, patient, and hardworking.

I think a lot of people that follow Japanese fashion outside Japan have this idea that it’s a free-reigning wonderland of Lolita fashion and delicious crêpes, where it’s totally acceptable to wear whatever you like, whenever you like. That may be true if you are just visiting as a tourist, but overall, when you live here you have to learn what is appropriate and when!

And I definitely think getting as much Japanese down as you can before you come to Japan is also super helpful. Really though, if you have a vision and truly go for it, anything is possible!

What is next for Lactose Intoler-Art?

I’m really hoping to continue my work here in Tokyo, and hopefully do some exhibitions abroad this year as well. Other than a new collection, I’m hoping to work on a collaboration with a Japanese vintage shop here soon, as well as a book project; but I’ve got to keep that under wraps for now!

I’d also just like to say thanks to all who have been so kind to follow for so long, and a big yoroshiku to anyone new! In the end, fashion is all about you. Have fun with it, and make it your own!