The electronic artist Moe Shop seems right at home in Tokyo’s dance music community. In 2018, they (Moe Shop’s pronoun of choice) popped up on bills at some of the capital’s busiest clubs, slotted alongside burgeoning Japanese producers; earned big-font billing at a recent party thrown by J-pop maestro Yasutaka Nakata at Shibuya’s Sound Museum Vision. And they are only getting more bookings in the near future. Impressive for anyone— but even more so given that Moe Shop is a 20-year-old producer from a French town they describe as “a cliche starter village you find in a video game.”

“I’m an artist from the Tokyo scene,” they tell Metropolis in early October. “That’s where I grew up as a performer.”

Moe Shop combines two artistic narratives into one project. They are an outsider, heavily shaped by the music and pop culture of Japan, that has managed to become a regular in the community by putting their own French touch on technicolor electro-pop.

But they’ve also used a strong following outside of Japan to put the spotlight on artists from the local dance scene: on this year’s Moe Moe EP, a different Japanese act teamed up with Moe Shop for each song. The album avoids the trappings of borrowing — or appropriating — sound from Japan’s pop culture while simultaneously promoting real Japanese talent, a feat that has proven to be difficult for foreign musicians in a time when “Japanese sound” has proven popular.

“There’s lots of great Japanese releases, but for people in the West it isn’t accessible at all,” they say. “I wanted to have a whole project that was a celebration of all these artists from Tokyo.”

Moe Shop (first name Pierre) was raised in a village about one hour from Paris. Their interest in music came courtesy of parents that they say had great taste, “I grew up listening to a lot of funk records. They were really big fans of Daft Punk, Mr. Oizo.” At the same time, they got into anime via Western television, drawn to regularly airing titles such as Dragonball Z and Death Note. That was a gateway that eventually led to an interest in Japanese producers like TeddyLoid and kz.

Moe Shop started making their own music in 2011 at age 13, using software to create tracks for rhythm games, but soon moved on to FL Studio and, after watching some YouTube tutorials, began constructing original tunes. “It took me like four years of just playing around before I felt comfortable with what I was putting out.” 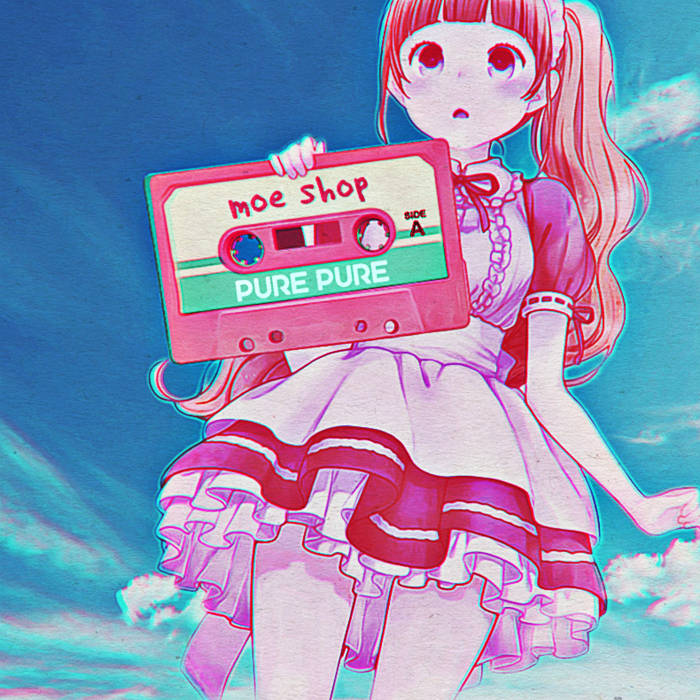 Their initial focus was on EDM sound, created through the moniker Keyboard Kid. They learned about creating a second persona from a friend and, intrigued, created Moe Shop as a place to upload snippets and experiments, often involving cartoon samples and a French house bounce.

“I had like 300 people following me and they told me to make a full version of some of the funky tracks there. That ended up as my Pure Pure EP.” The collection was a quick hit on Reddit, bolstered further by the timing — at this point in 2015, an internet micro-genre called future funk was gaining notoriety, built around compressed samples of funk music and often paired with 80s anime imagery. At its best, it isn’t too far removed from French touch music, making it a natural fit for Moe Shop.

“I actually didn’t know what future funk was,” they say. “I had a more EDM approach to future funk, and more 2000s anime references. I think people thought, ‘oh, this is kind of fresh,’ compared to what was going on.”

They think 2019 will be their biggest year yet, but with the end of 2018 on the horizon, it’s worth heaping praise on the Moe Moe EP. It was an intentional shift away from future funk, embracing filter house and electro-pop in the style of Yasutaka Nakata instead. Moe Shop says it was an “emotional rollercoaster” to put together, but all the collaborations came through, ranging from rising acts such as YUC’e and Toriena to the rapper maisou, who had nearly no online presence before the collaboration.

“maisou came on stage during a special set I was doing and just started rapping,” they recall. Immediately impressed by maisou, they approached her for a collaboration soon after. It was chance encounters like this that allowed Moe Shop to eventually create Moe Moe and use their presence to show the world the talent of the city that shaped them musically.