Brianna Slaughter, known by their YouTube name “Morenx in Japan,” is a genderqueer vlogger and Afro-Latinx college student based in Kyoto, Japan. Over the past two years Slaughter has taken the internet by storm with unconventional YouTube videos featuring hot takes on sexual and mental health, and racism in Japan. Recently, Slaughter became a leading organizer for the Kansai chapter of the global Black Lives Matter (BLM) movement. Currently based in America, the vlogger/activist spoke to Metropolis about speaking up for the movement, allyship and mental health. 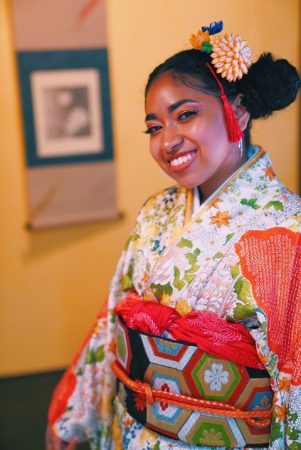 Metropolis: Let’s start with the basics of your name, how you identify, what brought you to Japan and how you ended up back in America.

Brianna Slaughter: My full name is Brianna Slaughter. My gender is a bit of everything. I don’t identify as a cis woman. I, instead, identify as genderqueer. I came to Japan in 2017 for university to study politics and international relations in Kyoto. I’m in my third year but I’m currently taking a leave of absence due to the COVID-19 pandemic. I’m not a fan of online classes, so I returned to take the semester off and be with my family. I planned on returning in April and my university is calling us [international students] back but it’s a little complicated since the borders are closed. Hopefully I’ll be able to return by September but we’ll see how things go.

M: Why did you decide to become a BLM Kansai organizer from America, and what were some challenges you experienced while working from abroad?

BS: When the news first hit about George Floyd’s death, I did a lot of research and made a master list of resources for my classmates to look at, be educated and help out but I didn’t feel like I was doing enough. Eventually a friend of mine, Ayana, reached out to me and asked if I wanted to join the BLM Kansai group chat. I didn’t have much prior experience with organizing before this. I’m still in America and although I was in the group chat I didn’t want to feel like I couldn’t contribute in some way. Being in the group chat, there are some pretty radical and woke people but not everyone was comfortable with having a presence online. Since I already had a large following online from YouTube, I decided to use my social media platforms to release as much information about the marches as possible. I’ve always received threats online since creating my YouTube channel so it’s not anything new. It’s scary because the things people say can get really personal but this is something I’m passionate about and I don’t plan to quit anytime soon.

M: You often refute the notion of being a role model and you’ve been receiving a lot of hate from your videos about sex in Japan. Now, after becoming the face of a movement, do you feel any pressure to change your image?

BS: No, I don’t feel the need to change anything about myself or how I present myself online. I don’t do respectability politics and that’s not the point of the movement. You don’t have to have a doctorate or be a respectable member of society to garner basic respect from people.The entire purpose of saying “Black Lives Matter” is to support all Black lives. I’m a human being, we’re all human beings. I shouldn’t have to prove my worth and list all my accomplishments for people to take me seriously or to understand why killing people like me is wrong. A lot of people get angry at me because I don’t talk about how kawaii and peaceful Japan is. That’s not my life and I never had that image of Japan even before coming here.

M: You talk about struggling with mental health in your book and videos. What has been your personal experience with seeking treatment in Japan?

BS: I was diagnosed with Borderline Personality Disorder (BPD) in high school but I hadn’t received much treatment from it before. Coming from a Latinx and Catholic background, my family believed more in “praying away” the issues, so for the longest time I’ve just been dealing with it on my own. In Japan I actually did manage to find a doctor in the beginning that subscribed me Ambien, which helped me sleep better but I don’t think it improved my overall wellbeing. I had a bad run in with the police after what they thought was a “panic attack.” I was recommended by other doctors to try but I’m in university and don’t have much money. Since the incident I just quit my meds cold turkey. I’ve largely just been dealing with this all on my own.

M: With the ongoing pandemic and, at the same time, the BLM movement, burnout is starting to catch up to all of us quickly. Do you do anything to prevent burnout or sensory overload?

BS: I wish I had a better answer but unfortunately I don’t. I’ve bought books that hopefully I’ll be able to read through before I return for school but with how crazy things have gotten I don’t know how that’ll go. I’m starting to learn it’s all about focus. Take breaks from social media and try to focus on something else. I take breaks, go on hikes, yoga, etcetera,  but even I still find myself reaching for my phone more than I should. I’ve clocked 13 hours online daily though but I’m trying to get better.

M: The conversation surrounding allyship has become deeper than ever. From your perspective and experiences, what do you feel makes a good ally?

BS: There’s a lot of performative allyship because there’s a strong expectation that if you’re not posting something then you’re racist, and it’s almost more damning to be called racist than it is to actually be racist. When the protests and riots started breaking out in America, I made infographics and links to send to my classmates on how to help but a lot of them weren’t receptive to it. “We’re in Japan, why does it matter what happens in America?” type stuff. Then once the march was announced, I saw a lot of them had gone to the march to take selfies and post about it even though they weren’t  aware that I was the person that organized this. It’s not about needing credit but it just shows that a lot of people don’t care unless they can get likes for it. If you want to be a good ally, get educated. And stop demanding other Black/LGBTQ people to educate you on these issues. Shut up and listen to the people who are actually going through these things and don’t talk over them. Be comfortable being on the sidelines and creating space for others to be heard.

Japan is not a secluded island nation. Black Lives Matter is global. Black people are in Japan making waves. Japan has housed me since I was 18 years old. My Black friends have lived there for over a decade. For us, by us.

M: Why do you feel it’s important to have this movement in Japan as well as globally?

BS: Because Black people are everywhere. Black people and Black culture has influenced so much culture and media that we consume and it’s time for people to listen to us and see us. When you look at urban culture and you see people who are dressed to the nines in fashion, braids, listening to Black music and doing the dances, then when you ask these people to show up for us they’re silent. It feels like this should all be common sense because this is something that has been happening for a very long time and will continue to happen unless something is done.

M: What message do you want your non-Black, non-LGBTQ followers in Japan to understand?

BS: This just goes back to the beginning, where I want you to respect me. I don’t care about being idolized or famous or any of that stuff, but I care about being respected. The things you consume is likely Black culture and it’s time you stood with us. Respect me, respect my identity and respect my culture.