Tokyo certainly has no shortage of izakayas. The Japanese bar/restaurant establishments cluster around virtually every station, from chains with menu-wielding staff outside ferrying customers to their door, to old-fashioned mom-and-pop joints that seat maybe five.

However, Tatemichiya has found a way to differentiate itself from the infinite other izakayas in the city. 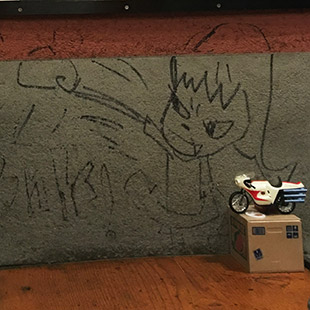 Tatemichiya hides in plain sight. Masquerading as an izakaya, the shrine to golden-age punk is demarcated streetside by a nondescript sign and menu board, on an otherwise forgettable intersection of two wide, busy roads. The only real landmark close being the conversely conspicuous, and brilliantly named, Evisu the Tokyo, the flagship store of the eponymous Japanese denim brand. The restaurant is so well-hidden that even with Google Maps open, I managed to walk past the stairs leading down to the front door. Pro tip: If you’re coming from Daikanyama Station and see Evisu, you’ve gone too far.

The walls within are covered in posters for the likes of The Ramones and Sex Pistols, and Japanese punk jams through the speakers. The aesthetic doesn’t feel like an affectation put on as a novelty to draw in customers. Rather, it’s clearly a labor of love for the owner, who captains his crew from behind the bar, while pouring drinks and grilling yakitori skewers. His grey hair pushed into a thinning mohawk, he serves and jokes with customers candidly, embodying the cozy but cool vibe of the establishment.

The main seating area is divided into a sunken dining room with loft-style seating above, making the small but high-ceilinged space seem greater. The loft area accommodates groups nicely, but reservations may be necessary.

If Tatemichiya were a live music show, the bar would be its closing act. The centerpiece of the restaurant, it is framed by a playful contrast of Japanese art and Western punk motifs: the lights above are made from drum cymbals, and the whole place is backed by a wall of sake bottles. Ten minutes after I’d entered, I spotted authentic graffiti from superstar artist Yoshitomo Nara. A couple of original pieces from him are on display, apparently scribbled on the walls on a drunken night.

The food is very good overall, but it’s almost an afterthought to the setting and atmosphere. However, as is typically the case at smaller izakayas, the food is better than at the big chains. 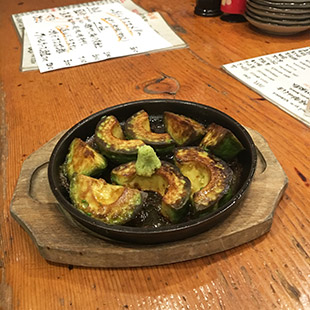 On a recommendation, I ordered the avocado steak, not knowing what to expect from the name alone. Turns out it’s sliced avocado, grilled and seasoned like steak … although I’m guessing at that last part. Regardless, it was the best thing I had that night, and I’d order it again.

Among the other dishes were grilled eggplant, fried chicken cartilage, sun-dried mackerel, and stir fried beef intestines in teriyaki sauce—which, if you’re not put off by eating guts, is great.

As a side note: rumor has it that the place is popular with visiting foreign rock stars.

Tatemichiya’s aesthetic and vibe are its main charms. If you’re going there for the food, you may not be their target audience.