The only time to hit the streets

“The best time to ride is after the train stops,” says street rider Nobuhiro “Pegy” Masuda. “And it stops around midnight.”

It’s then when the city is in bed or boozily glued to a barstool that the skateboarders and BMX riders hit the streets. On a typical night, Pegy meets his crew before midnight and they cruise around, looking for spots in Tokyo to ride in.

Why at night? Simply because it’s too crowded during the day. The type of obstacles BMX riders need are always in use; the handrails by steps are groped all day long, and tired bodies heave themselves on and off bank ledges. It’s Tokyo: any public space is going to be occupied by one of the 13 million people living here—unless it’s the dead of night. 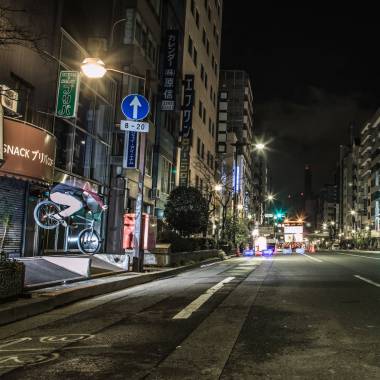 Street-style riding is different from the park-style, where tricks are limited to the features of the skatepark and the imagination of its designers. The street riders say that any spot can be ridden; you just need the eye for it. But of course, there are some things you can’t ride.

Street riders and skaters see the city through different eyes from us pedestrians. They prowl our city in the day, checking out rails, banks, walls, and gaps. Tokyo is full of unpleasant design in the form of stoppers on ledges and guards on rails. Compared to other cities, the obstacles here are smaller, trickier, and usually without much space to land. “Tokyo is huge but narrow and strange. There’s no similar city in the world,” Pegy says. That’s why Tokyo riders have developed a rather unique style.

Street skaters and BMX riders are not the vandals they are often accused of being. They are (mostly) honest and decent, and usually very self-aware, traits that come from their determination and psychological strength to ignore pain when trying, and trying again, to execute a difficult trick.

You might only recognize one by the callouses on his hands or the grazes on his shins. Otherwise, during the day, they are the artists, businessmen, architects, and teachers that walk among us in Tokyo crowds. Pegy himself is a salaryman, working from 9am to 7pm, but still finds time to ride two to three nights per week. He admits it gets tiring, especially since they usually finish riding around 6am.

Filming and taking photos is a big part of the sport as well. It’s made even more challenging in Tokyo, where riding at night means you have to bring additional lights to capture good footage. But it’s meant to be hard, and it demands creativity. 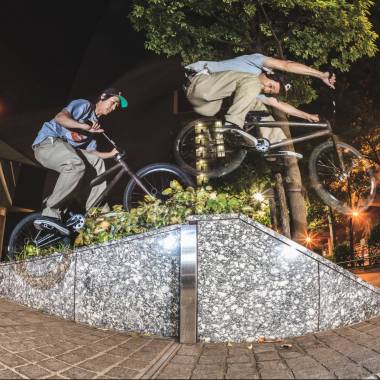 Still, there is the likelihood policemen will wag their fingers at the skaters and riders for potentially damaging property and making noise. BMX bikes are frowned upon because they often don’t have brakes, and skating on the street is banned. But some spots just glow so strongly with potential to be ridden that “no trespassing” signs become invisible.

Tokyo “underground” skateboarding crew “KP” are notorious for their anti-police attitude. Their videos are satirically edited to mock the unfortunate policemen on night duty. But most riders and skaters try to be polite when told off.

“We don’t want to get in trouble and waste time. When they say leave, we’ll leave,” says Pegy. But it’s likely they would come back the next night to keep filming tricks at that spot.

It’s a way of life for most people, addictive and rewarding in ways other sports can’t be. It’s been described as a kind of meditation, where riding or skating is just part of the body’s natural movement, and the real exercise is in the mind.

The psychology of BMX riders and how they interpret the urban environment is explored in the feature film ABOVE BELOW. It’s shot and put together beautifully by director Richard Forne, who follows the stories of some of the world’s best BMX riders. The 38-minute film stars Tokyo as well as other cities around the world. You can watch it here:

This video below is by the underground skateboarding crew from Tokyo, KP.

Here’s one showing the unique style of Tokyo BMX riders on the streets, and embedded below is a video featuring just Pegy. He’s sponsored by Animal Bikes, Alive Industry, Celladoors and Del Mar BMX.