A Day at Yonner Cooking School

It has been said that food is the soul of a country. This couldn’t be more true for Okinawa.

The southernmost of Japan’s 47 prefectures, Okinawa is a chain of over 150 islands, stretching from the southern tip of Kyushu to close to Taiwan, over a distance of 1,000 km in the South China Sea. With a sub-tropical climate in most parts ensuring temperatures of over 20 degrees throughout the year and high levels of rainfall, Okinawa boosts a rich eco-system with a diverse flora and fauna.

From the 15th to the 19th century the islands became unified as the Ryukyu Kingdom, which had its own religion and language. The islanders traded with their neighbors in China, Southeast Asia and Japan, which made the Okinawan islands a melting pot of many traditions and culinary traits.

This mix of favorable natural conditions and diverse foreign influences produced unique eating habits and a cooking style that is now known as “Okinawan cuisine”.

When I last visited Okinawa, I met Kazumi Kayo, a local of Naha City, the capital of Okinawa Prefecture. She set up and runs Yonner Cooking School where she offers classes in Okinawan cooking. Her classes start with a visit to the local market to source some ingredients.

She met me at Tenbusu Naha, the local tourism office right by Kokusai-dori Street. From there we walked to the Naha Public Market, an indoor food market with  sections for fish, meat and processed foods.

It is utterly enjoyable to walk from stall to stall with Kayo and look at all the foods while she explains their nutritional value and how they can be used in Okinawan cooking. We stopped at several stalls to marvel at the colorful fish that I’d never seen before, or look at vegetables not available elsewhere in Japan. 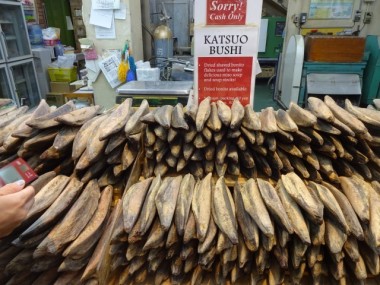 It is said that katsuobushi (dried bonito) and kombu (dried seaweed) are best in Okinawa. When I asked Kayo about it, she took me to a small shop in an arcade near the Public Market. This shop specialized in katsuobushi. On several shelves in front of the stall, dried bonito blocks were piled high. Customers pick the blocks they like, which are then taken to a machine and shaved into bonito flakes.

Picking your bonito block is easier said than done. Here is the insider tip: it takes four of these blocks to reconstruct the shape of the fish. Two blocks form the back of the fish and two are from the belly. Depending on which you choose, the fat content of the fish and hence the taste of your bonito is different.

The abundance of sunshine and high temperature year-round ensure the growth of a good range of fruits and vegetables, many of which are different to those grown in other parts of Japan.

Traditional Okinawan cuisine maximizes the nutritious values of the locally sourced ingredients. Rich in vitamins and minerals and low in calories, research found that Okinawan fruits and vegetables have many anti-aging and antioxidant agents.

Goya (bitter melon) contains large amounts of vitamin C. It is used in Okinawa’s trade-mark dish goya champuru, a stir-fry that contains goya, tofu, egg and bacon. Goya can also be made into tempura. Goya juice is the Okinawans’ remedy against summer heat.

Murasaki imo (purple sweet potato) is grown mainly in Okinawa. The purple color comes from pigments that are anti-oxidants. Murasaki imo also contains high levels of vitamin A, B6 and C, as well as potassium, iron and manganese.

Handama (Okinawan spinach) is also rich in antioxidants, like the purple sweet potato, due to the same pigments that make the underside of the leaves purple. It contains high levels of potassium, calcium, iron and vitamin A.

Asa (Okinawan sea lettuce) is a powerful ingredient that contains many vitamins, including vitamin A, B1, B2, B12, C and K, and many minerals, especially calcium and magnesium.

Shima dofu (Island Tofu) is the local Okinawan tofu. It has a lower water and higher protein content than tofu in the rest of Japan. Hence, its nutritional value is higher.

Pork meat, containing good amounts of vitamin B, is the base for many dishes in Okinawa.

Being sub-tropical islands, the fruit basket contains guavas, papayas, mangoes, guavas and bananas, amongst others. Okinawa bananas are small and sweet.

Okinawans also like to spice up their food with good amounts of onions, garlic, Okinawan chilli pepper and an array of local herbs. 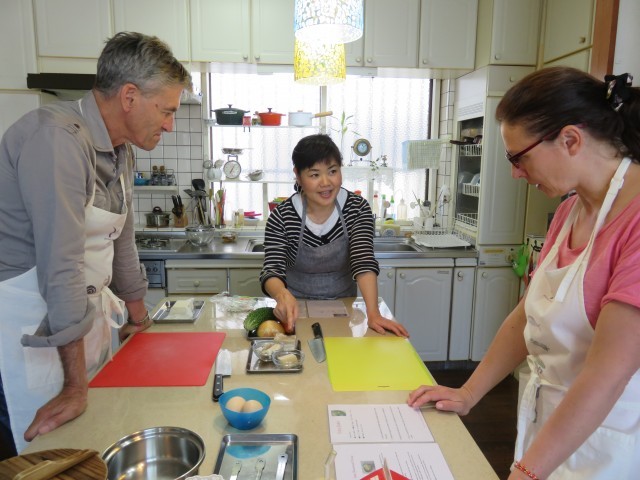 Kayo, who was born and grew up in Naha, has been running Yonner Cooking School for 9 years. Before setting out on her own, she helped at another cooking school for several years. In fact, she also attended many other cooking schools to learn more about Okinawan food. Her interest in learning to cook the local cuisine was sparked by her past work as a food stylist, when she had to arrange food for presentation in photographs and videos.

However, the groundwork for cooking had already been laid by her mother and mother-in-law. From her mother she picked up home-style cooking, while her mother-in-law taught her high-class cooking. Kayo says that her mother-in-law’s family line goes back to the First Sho Dynasty of the Ryukyu Kingdom in the 15th century.

That combination of royal cooking, commoners’ cooking, and many years of experience results in an Okinawan culinary expert. Kayo does not only teach foreign guests but also many young Okinawans who have lost touch with traditional food culture due to the influx of American-style fast foods.

Yonner Cooking School is set up in her apartment in Naha where a large open plan kitchen invites participants in her classes to get into action. But first Kayo explains what will be cooked, and she does so over a cup of hibiscus tea.

It is difficult to concentrate on the explanations as the cup of tea set on the table is a visual delight.  The pink color of the tea and the dried flower petals that swirl around within it are beautifully presented in glasses.

The hibiscus flower captures the lifestyle of the sunny Okinawan islands well. Colorful hibiscus flowers can be seen everywhere. Their bright red and orange blossoms sprinkle the landscape with dots of color and they brighten the mood of everyone who sees them.

For centuries Okinawans have been using the culinary and medical properties of hibiscus in herb teas, supplements, jams and salads. There are over 1,500 varieties. Hibiscus contains vitamin C and minerals, and it’s used as folk medicine to relieve fatigue and lower blood pressure.

Okinawans think of food as ‘nuchi gusui’ – medicine for life, explains Kayo. This beautiful cup of tea indicates that ‘medicine for life’ here also means to nurture our soul and engage our senses to brighten up our life. This is surely a holistic concept of well-being. 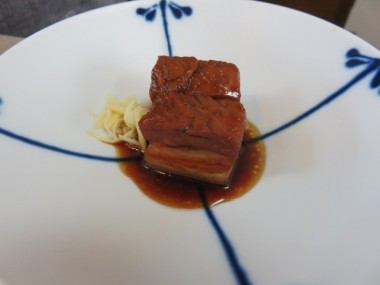 Prior to class, Kayo prepares some of the ingredients, such as the soup stock and the pork meat. She explains that there is a special way to prepare the pork. Okinawans boil the pork only partly, then drain the water, and boil the meat again, but this time for a long time, about 2 or 3 hours. The draining of liquid removes excess fat, and the long boiling of the meat makes it tender and brings out the flavor.

With an apron tied around our waists, everybody is ready to follow her instructions. Step by step she explains what to do, and then everyone who attends has a go at cutting vegetables and tofu, putting them in pots and pans and stirring them over the fire.

Finally there is another treat to prepare: goya juice made of goya, syrup, water and some drops of Okinawan lime. Delicious!

Then it is time to taste what we cooked. Well presented in small bowls and set out on the kitchen table, we savor each morsel of food. Eating slowly and chewing well is part of the secret for healthy eating.

All in all, it takes 2 to 3 hours to complete the Standard Course. One can choose to start at 10am and eat the meal for lunch, or start at 5pm and have it for dinner.

The 12,000 yen/per person package includes the tour through the market, guided by Kayo, ingredients and instructions, as well as cooking and eating. There are discounts for 2, 3, 4 and more participants.

Trendy Food for a Long Life

Invasions, war and occupation have ravaged the Okinawan Islands, and while they have erased some of its culture and heritage, traditional Okinawan cuisine has not only survived but is thriving. In recent years there has been an increased interest in Okinawan cooking on the part of health-conscious Japanese and and the international food community has just begun to catch on.

One reason for this interest is the fact that the Okinawan way of cooking and eating has been proven to be one of the main factors for the longevity of Okinawan people.  Okinawans, on average, live even longer lives than their counterparts in the rest of Japan. Where else in the world can you find more than 400 centenarians? To reach an age of 100, and even beyond, and be healthy in body, mind and spirit, is a rare gift well worth cooking for. 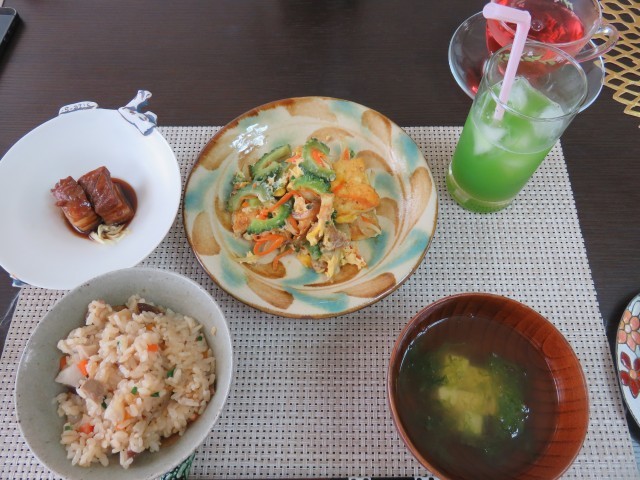 The successful results of cooking class

Originally from East of the Wall and south of Berlin, Alena lived in London for 9 years and in Tokyo for 6 years before in 2011 settling by choice in a small village in the southern part of the Kii Peninsula. She enjoys the great outdoors and gardening, guiding Forest Therapy walks and Kumano Kodo pilgrimages, bathing in a different hot spring on each day of the week and going on road trips riding her vintage Suzuki motorbike or driving her vintage Daihatsu Mira along the traffic-light free curvy roads of this remote part of Japan. She has written for Metropolis since 2008.