ONE: CENTURY, to be held at Tokyo’s Ryogoku Kokugikan on October 13, will be the biggest event in the history of martial arts. Forty-four athletes from all over the world will convene for 22 bouts throughout the day, offering fans a feast of combat they have never seen before. To accommodate the full list of first-rate bouts, ONE will do what no other organization has done and promote two full-scale World Championship events on the same day. ONE: CENTURY Part I will kick off at 9am local time before ONE: CENTURY Part II comes in at 5pm for an evening of additional action.

There is no more anticipated bout among female athletes in any discipline, than the second meeting of “Unstoppable” Angela Lee and “The Panda” Xiong Jing Nan. The last time these elite competitors met, they put on one of the most tense bouts of the year, with the match swinging wildly to each fighter’s corner before Xiong got a dramatic fifth-round TKO. With that, she retained her ONE Women’s Strawweight World Title and consigned her Singaporean rival to her first defeat as a pro. This time round, the Chinese hero will move down a weight class to attempt to claim the ONE Women’s Atomweight World Title and make history as the first female two-division World Champion on the global stage. 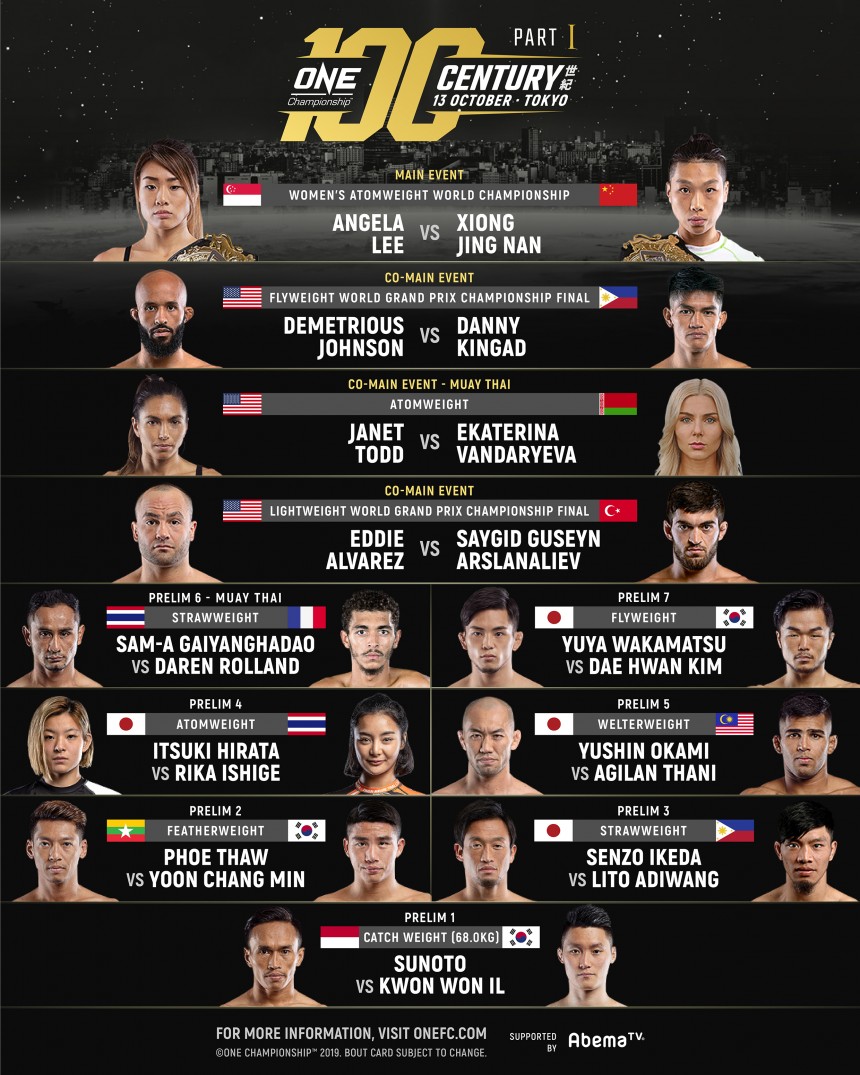 Two giants in their divisions will be going to war as ONE Heavyweight World Champion Brandon “The Truth” Vera challenges Aung La “The Burmese Python” N Sang for his ONE Light Heavyweight World Title. Both fighters have the utmost respect for each other, but that won’t stop them from going all-out in the headline attraction of ONE: CENTURY Part II. All four of Vera’s match-ups have ended in a spectacular, first-round knockout, while Aung La N Sang has earned stoppages in eight of his 10 wins, and brought the heat in two bouts in hot competition for Bout of the Year.

Bibiano “The Flash” Fernandes vs. Kevin “The Silencer” Belingon is the Bantamweight division’s greatest rivalry, and one of the most epic in ONE history. These old foes have already met three times and were supposed to settle the score once and for all in March after splitting wins in World Title bouts in 2016 and 2018. Unfortunately, due to an inadvertent foul from the Filipino, the match was brought to a close in an unexpectedly anticlimactic ending. Clearly not a good enough end to one of sports’ most burning rivalries, the two will meet in an unprecedented fourth ONE Bantamweight World Title match in the evening installment of the Tokyo show, bringing an end to their contest once and for all. Both men have the finishing ability to end this bout early, but are equally capable of bringing fireworks for five rounds.

The ONE Flyweight World Grand Prix, ONE Lightweight World Grand Prix, and ONE Super Series Featherweight Kickboxing World Grand Prix tournaments will all conclude on the same day, and three men will emerge victorious from a trio of stacked brackets. Five countries across three continents will be represented in the World Grand Prix Finals as the USA’s Demetrious “Mighty Mouse” Johnson faces the Philippines’ Danny “The King” Kingad, while his countryman Eddie “The Underground King” Alvarez meets Saygid “Dagi” Guseyn Arslanaliev of Turkey in Part I. 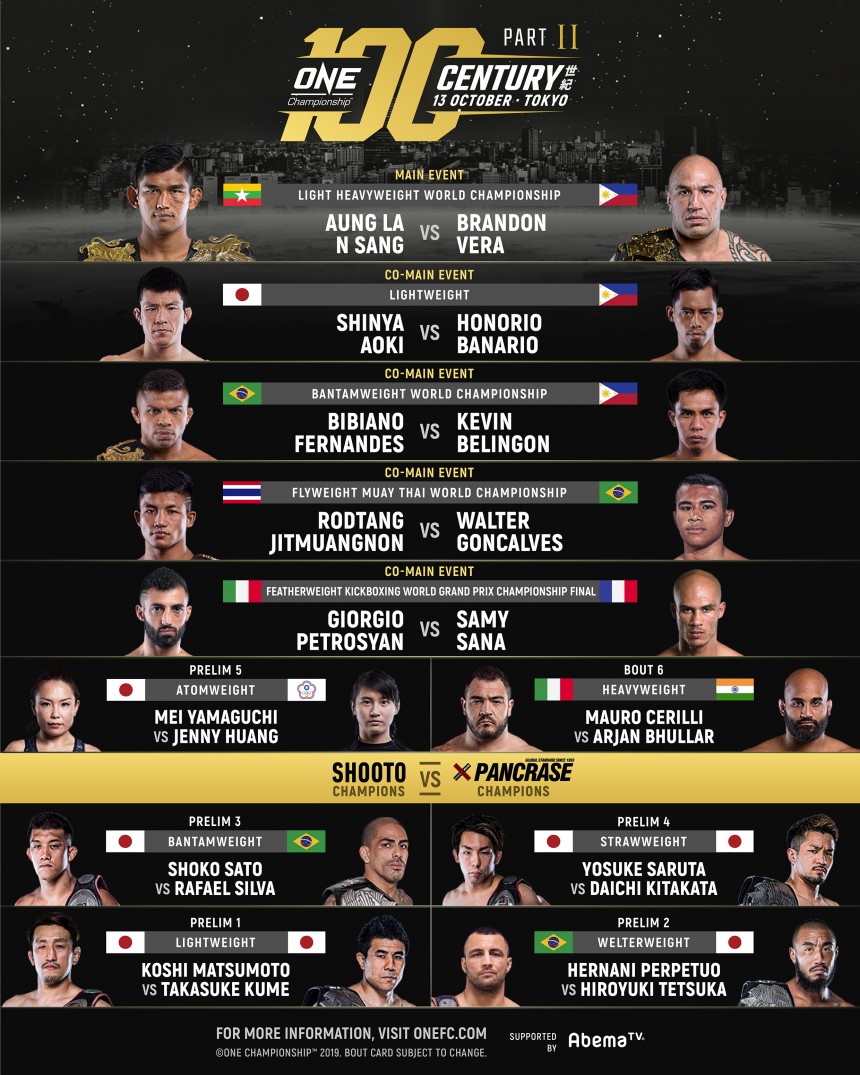 Part II of martial arts’ biggest event shows no sign of slowing down, promising more action with the biggest prize in kickboxing history on the line. It will be Italy vs. France as Giorgio “The Doctor” Petrosyan and Samy “AK47” Sana face off for a life-changing US$ 1 million. ONE: CENTURY Part II will also see the return of Rodtang “The Iron Man” Jitmuangnon, who will defend his ONE Flyweight Muay Thai World Title for the first time against ONE debutant Walter Goncalves. Every one of the Thai hero’s bouts in The Home Of Martial Arts so far has offered edge-of-your-seat thrills, and his first five-rounder was his best yet.

The last time ONE came to Tokyo, the bill was bursting at the seams with 22 soon to be World Champions; this time, that number has grown to a barely-believable 28 across a full day of contests, including former titleholders from the world’s largest martial arts organization. One of the big draws for the home fans will be former ONE Lightweight World Champion Shinya “Tobikan Judan” Aoki, who will battle former ONE Featherweight World Champion Honorio “The Rock” Banario in the co-main event of ONE: CENTURY Part II.

To kick off event week of ONE: CENTURY, ONE Championship will be holding the inaugural ONE Martial Arts Fan Fest which is set to take place on October 5-6 at Tokyo’s Bellesalle Shibuya Garden. All Metropolis readers get free admission! Just visit the ticketing page and use the promo code oneffguest.

The ONE Martial Arts Fan Fest aims to bring the martial arts and esports communities together in an exciting two-day event. The world’s top martial arts athletes and fighting game esports players are invited to participate in a series of fun and engaging activities, including exclusive meet-and-greet sessions and exciting competition.