Bicycles are a very Osakan mode of transport. The two-wheeler is the vehicle of choice in the city, favored by everyone from tiger print-clad grandmas to young parents balancing babies on both ends. While locals trundle about above ground, visitors—faced with decoding a mess of rainbow-spaghetti subway lines—often stay close to their hotel and miss out on the variety that Osaka has to offer. Even those who live in the city, like myself, usually follow beaten paths between stations and familiar destinations.

Enter Cycle Osaka. Started in 2013, the company unifies cyclists with a shared love for exploration by offering authentic city tours in small groups, by bike. 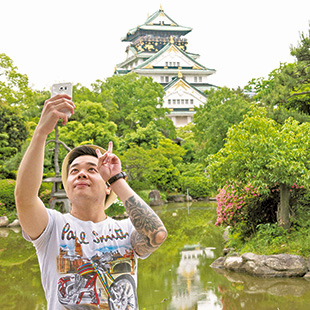 As we embarked on our trip, our guide, Sam Croft, confessed to being surprised that no one had tried the concept—then panicked that he would be beaten to the punch.

Our bikes for the day were not traditional Osakan mamachari (“mom bikes”), but sleek roadsters: black and white, with orange tires and seats. After a quick safety briefing, our group—comprising five Australians and two Dutch—practiced turns in the alleyway.

Two more travelers had failed to arrive, to the obvious frustration of Sam. “We had a waiting list for today!” he lamented, “But, small groups are the best. Today we have the perfect number.”

Cycle Osaka’s headquarters are in Fukushima-ku, a ramshackle neighborhood slumming at the fringe the city’s central business district. By train, it’s a blur of buildings—but by bike, we discovered a world of tiny backstreets, back doors to small factories, and tiny, urban shrines.

Under tree tunnels by the Yodogawa River, Sam pointed out the ’80s modern art statues—hangovers from Bubble Era excesses. By Nakanoshima’s arch-and-brick City Central Hall, he pulled out a folder of photos taken at the spot one hundred years ago, at the start of Japan’s rapid transformation from feudal society to industrial power. We learned that the domed roof of the Bank of Japan is twin to the National Bank of Belgium.

A self-confessed history geek, Sam—as well as his folder—revealed how deeply Osaka has changed. Seventy years ago, it was a post-war wasteland, gutted by incendiaries; today, giant glass business towers surround Nakanoshima’s rose gardens, blooming with perfect timing for our tour. 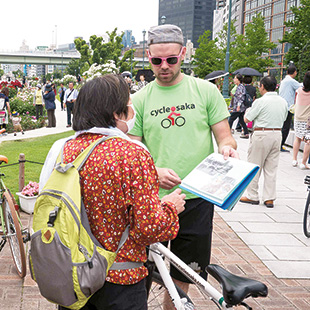 “That’s the difference between Osaka and other places,” Sam said as we waved goodbye to our temporary tour companion. “The people.”

Curious looks proved that we were definitely as much sight as sightseeing for those we passed—but in contrast to my home country of Australia, where the sight of bicycles excites rage, we got waves, smiles, and “Aah, sumimasens” as people became aware of us.

From Sarukanomiya, where we saw photos of its famous springtime sakura and autumn foliage, we visited the Mint, touring its Japanese garden and taking photos of the first building in Japan to install Western-style toilets.

“Have you been here, Flick?” Sam asked every stop, to which, with some embarrassment, I often replied, “No.”

At Osaka Castle, I thought I was back in familiar territory until accidentally kidnapping half the group, and almost successfully launching my own tour. Sam, the ever-careful guide, rescued and led us onto the perfect photo spot.

At our last destination, Utsubo Park, another rose festival was in full swing—this time with tents selling hand-dripped coffee and fried chicken with a healthy sauce, as folk dancers spun in the background. Such random moments, while definitely not part of the schedule, are a special difference of authentic tour experiences. The sense of shared adventure bonded our group, though we only rode together for a few hours.

“They get really close on the full-day tours,” Sam explained. “There’s more time to relax and chat.” Our half-day had finished too fast, as we returned to Fukushima-ku and became boringly bipedal again.

Whether in Osaka for two years or two days, I suggest doing as the locals do: squeeze down an alley, chat to an obaachan, and just go exploring from the back of a bicycle.