Around two weeks ago, on June 20th, 2022, the Osaka court ruled the ban on same-sex marriage to be constitutional. After a similar court case in Sapporo in March 2021, where the ban on same-sex marriage was deemed unconstitutional, LGBTQ activists were hoping for a similar outcome. The ruling by the court of the third most populous city of Japan is a blow for queer communities across the nation. With Japan being the only member of the G7 countries (a group comprised of seven of the world’s most advanced economies) where same-sex marriage remains illegal, this court ruling feels like a stumble even before the starting line. 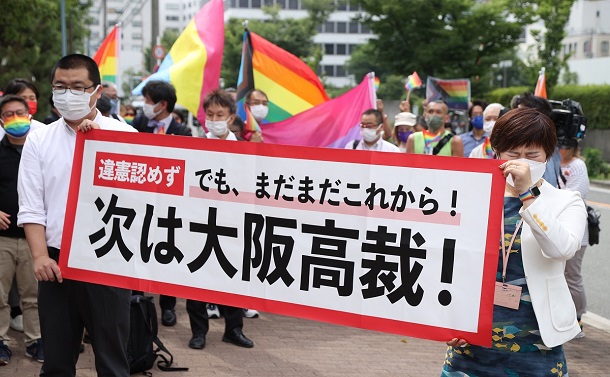 To understand Japan’s legal stance on same-sex marriage, it’s important to grasp its social climate. Many of Japan’s social and economic policies are rooted in traditional values; they’re still latching on to the post-war nuclear family model as the basis of social order and economic success, which worked until the 90s but is certainly obsolete now. Even this court ruling simply reaffirmed Article 24 under the Rights and Duties of the People chapter of Japan’s constitution where marriage is defined to be based on “the mutual consent of both sexes and it shall be maintained through mutual cooperation with the equal rights of husband and wife as a basis.” Surprisingly, though, Japanese people aren’t as opposed to same-sex marriage as one might surmise. According to a survey on gender conducted by NHK in March 2021, a majority of almost 60% answered “agree” or “somewhat agree” to whether they believe marriage should be allowed for same-sex partnerships. From personal experience, I have found most Japanese people, especially young people, to range from indifferent to accepting when it comes to LGBTQ rights. Japanese people are often surprised when I casually bring up homosexuality, simply because it is not talked about and even has an air of “taboo” to the topic, but are not immediately turned off by the subject.

Japan currently has a set of bizarre, unjust rules for same-sex partnerships. In some municipalities, namely Shibuya, same-sex couples can get a “partnership certificate” that grants them some rights like renting places together or hospital visitation rights, but other rights that are the norm for heterosexual couples – including asset inheritance, parental rights over their partner’s children, and of course, marriage – remain inaccessible to same-sex couples. How can Japan’s policies for members of LGBTQ communities be so conservative in a country where the majority of people are for same-sex marriage or indifferent at worst? 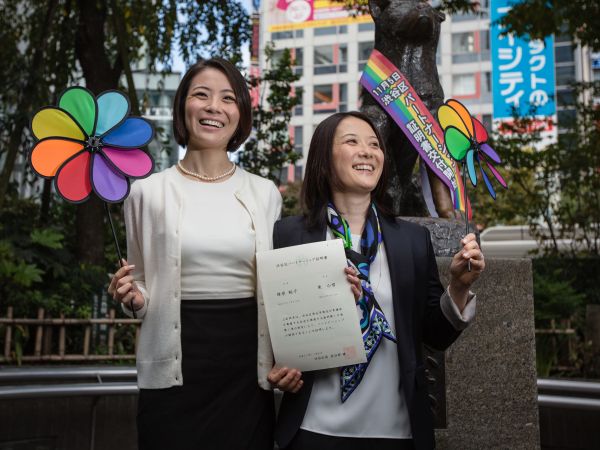 Image from WJCT. Koyuki Higashi (L) and Hiroko Masuhara (R) celebrate and hold up their same-sex partnership certificate in Shibuya.

In my experience, Japan has a bad habit of not talking. Not discussing in fear of being out of line. And it’s not just sealed lips, it’s watchful eyes, simultaneously scanning the crowd for anyone that isn’t the norm, and to see whether they are being perceived as anything other than futsu – the easy-to-swallow, neatly-packaged, normal. This isn’t all bad, it materializes in litter-free streets, in people standing on trains to let the elderly and pregnant people sit down, in impressively polite customer service at restaurants and department stores. But it also materializes in judgmental glares when women wear shorts in the summer, in joking about foreigners, and, coming back to my point, a ban on same-sex marriage. A lot of people in Japan may not be against same-sex marriage per se, but they also don’t care enough to come under the intense scrutiny of Japanese society. Case in point: the three couples that filed the suit against the Osaka court may have spoken up, but it was only the second case on the issue of same-sex marriage heard of in Japan. Most non-LGBTQ people of Japan wouldn’t risk their normal day-to-day lives to speak up, and the weight of advocating in Japanese society is heavy.

Although queer communities in Japan (obviously) exist, with Shinjuku Nichōme being a bustling gay nightlife district, they have the impression of being more hidden compared to countries like the US – with hidden being less about visibility and more about Japanese people turning a blind eye. Japanese people are generally modest and traditional; they don’t like to show much skin or talk about vulgar topics loudly in public. And the topic of LGBTQ rights, especially after the wake of the AIDS epidemic, is inextricably connected to sex and shame in the minds of many Japanese people. They may grimace and say that people can do what they want, but they don’t want to think about other people having sex. This being a homophobic comment aside, LGBTQ rights, and queerness as a whole, has never been about sex, even though it may be part of it. It is about the rights of real people who simply want the same things “normal” people take for granted. If Japanese people were a little quicker to say “sumimasen” when they bump into someone in a crowded street, to help when they see someone who tripped on the stairs, to speak up against bullies, to say, hey, maybe being gay is not only okay but a valid way to love and experience life, then maybe Japanese society wouldn’t be so scared of being different. Image from HuffPost Japan. Plaintiffs of Osaka court holding up a sign for marriage equality.

This is not to say that open discussion will solve everything. Despite public opinion, there is a large divide between Japanese politics and its people, and a lot of the control is held steadfast by those who are afraid of change and progress, even when the current belief systems no longer serve its society. There is a lack of interest in politics by a lot of Japanese people, and it stems from how we don’t talk about it. Young people in Japan don’t vote like they do in the US, and social issues aren’t at the forefront of conversations. In the US, Instagram and Twitter light up with infographics in the wake of a social issue and it’s normal for students to post videos while attending a rally. In Japan, this level of engagement with politics would be considered intense, and again, not normal.

The cultural differences go beyond political activism and are deep-rooted institutionally. In progressive school districts of the US, not only is proper sexual education common, there are open discussions on how to practice safe sex with a partner of the same sex. The discussion of gay sex in an academic setting is unheard of in Japan. I will never forget sitting in on my friend’s college class here in Japan, and finding out that testosterone and estrogen are respectively called the dansei horumon (male hormone) and josei horumon (female hormone) in Japanese. The professor, a bored-looking Japanese man, went on to explain the menstrual cycle, saying that women may experience a spike of energy while they are ovulating and that it is “prime time for dieting.” I remember vocalizing my irritation with how unnecessary it all was – the gendering of hormones that exist in all humans (hormones don’t have a gender!) and dieting advice targeted at women that nobody asked for, in a college classroom. My friend and her friends, though they vaguely agreed, simply nodded along with slightly amused eyes, saying sasuga amerika-jin dane (as expected for an American). Japanese society is imbued with quiet politeness, tame emotions, and with not caring too deeply about larger issues in order to remain neutral. To remain normal. 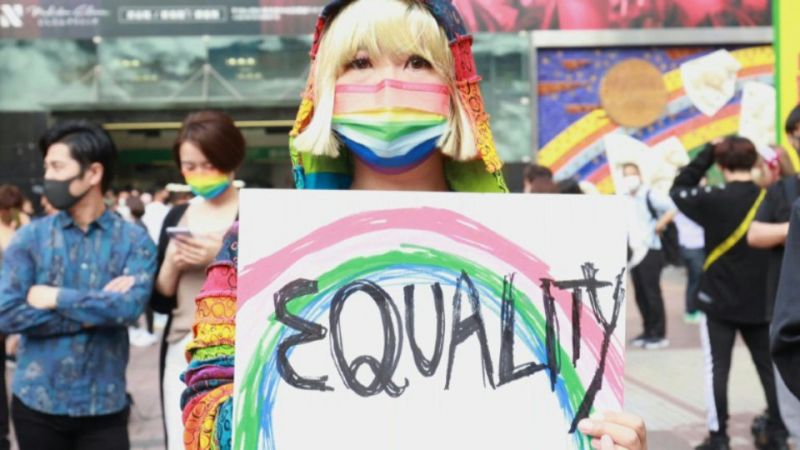 Image from Barron’s. An LGBTQ activist in Shibuya.

Personally, as a half-Japanese, bisexual individual, I have long given up on coming across as “normal” in Japan. Most Japanese people, however, still have the luxury of blending in if they wanted. It takes a tremendous amount of effort and bravery to stray from the well-worn path anywhere, but more so in Japan with the pressure to stay in lane. With open communication and time, my hope is that people will gradually learn that it’s okay not to fit into the cookie-cutter shape of a human which, in fact, very few people do. I hope that people will learn to accept the frilly edges of themselves and others that would otherwise be cut off by the metaphorical mold of society. And I hope, that once we come to terms with queerness as just another character trait that comprises the perfectly imperfect human who is worthy of love and, well, basic human rights, Japan’s legal system will follow suit and start creating for its people a society where we don’t have to fight for the right to just be ourselves.