Not all Tokyo eateries are minutes from the station. Many restaurant owners rely on someone with a willingness to go that extra step, or an extra 1,000 steps, and to use something other than the train to reach their establishment. R Burger and Liquor Bar is one of those places. Located between Sangen-Jaya and Ikejiri-Ohashi on the Den-en-toshi Line, it sits along the borders of Setagaya Park, one of the largest local parks in the area.

The building stands out amongst the others on the street, with its bold, red-brick exterior and large white lettering. There are two glass sliding doors at either end of the façade to enter. One will take you to the eating area, and the other into the store, which shares the same space. The store trades under the name R General Store, and has a plethora of items aimed at those with an active lifestyle. With only a few dividing walls around the eating area creating an intimate dining space, there is nothing else separating these areas. You will also notice that the room is divided diagonally, which gives the space a seamlessly blended feel between café and store. 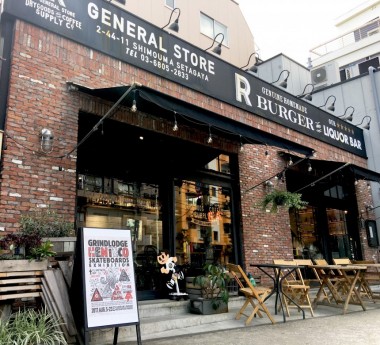 R Burger and Liquor Bar runs an a-la-carte style lunch menu, with barbecued meats, sandwiches, tacos, tapas, pies, salads, desserts and of course, burgers. I ordered the pulled-pork tacos (¥1,000). They came as a set of two, topped with guacamole, sour cream and jalapeños spread on soft tortillas. I accompanied this with a side of house-made pickles (¥500, off the tapas menu) and a ginger ale.

While I was enjoying my tacos, I looked around to see what the other tables were eating. To my right, there was a table of three guys all devouring cheese burgers, and across from them, a couple was sharing a mouth-watering barbecued beef brisket.

A hub for locals to frequent, and a place to meet new people, do things, strike up random conversations, share memories, and of course, eat a great meal.

After I’d finished eating, I ordered an iced coffee (¥500) and drank it while looking around the store. Its shelves were filled with camping equipment, coffee brewing supplies and some apparel. There was also an old-school skateboard exhibition pop-up store. In front of a wall of skateboards I got to chatting with another customer. He was a local of the area and had just been swimming with a group of friends near the park; they’d decided to stop in for some burgers and beers. He asked me where I was from, and if I’d ever been to Bali. He was planning a trip there in late summer, and wondered if I had any recommendations. Unfortunately, I’ve never been.

As I walked back past the open kitchen, I noticed the dessert pies on a glass and contemplated if I had room for a slice, but in the end, held back. Back outside, on the walk back to the main road, I stopped in at a little craft store, peeked in the kitchen window of a chocolate store, and was taken aback by a beautiful beer garden. A local eatery is much like a park in a large city. They become people magnets, a hub for locals to frequent, and a place to meet new people, do things, strike up random conversations, share memories, and of course, eat a great meal.