Austin-based Ringo Deathstarr on the new album and having babies

Nicknamed “Silicon Hills” for its teeming tech startup culture, the city of Austin, Texas is also the world’s self-proclaimed “live music capital” with over 250 venues hosting musicians year-round. One of the many bands to emerge from this coveted scene, Ringo Deathstarr has established a loyal fanbase in Japan, as well as in the U.S., following the release of their debut album, Colour Trip, in 2010. Singer and guitarist Elliot Frazier originally formed the band in 2005 in his hometown of Beaumont, Texas before moving to Austin and coming together with bassist Alex Gehring (who Frazier met in a clothing store) and drummer Daniel Coborn (who went to Frazier’s high school).

While initially eschewing the idea of having a name at all, the three-piece noise-pop group landed on a catchy portmanteau of two pop-culture icons: the Beatles drummer Ringo Starr and a moon-sized, planet-destroying space station from the Star Wars franchise, the Death Star. Their seemingly spur-of-the-moment decision mirrors the kind of music the band makes, which is less about neatness and reflection than it is about purely enjoying the process. As Frazier puts it in a Vice interview, “It’s just music that’s fun for us to play.”

Beneath Ringo Deathstarr’s cool, nonchalant attitude is a film of real dedication, however, and some serious songmaking. After a five-year hiatus following the release of their third studio album, Pure Mood, in 2015, the band released a new, eponymous LP earlier this week. In late January, the members embarked on their tenth Japan tour joined by Japanese idol group Maison book girl. Metropolis spoke with the band at Kichijoji’s CLUB SEATA about their creative process, parenthood and why they love doing shows in Japan. 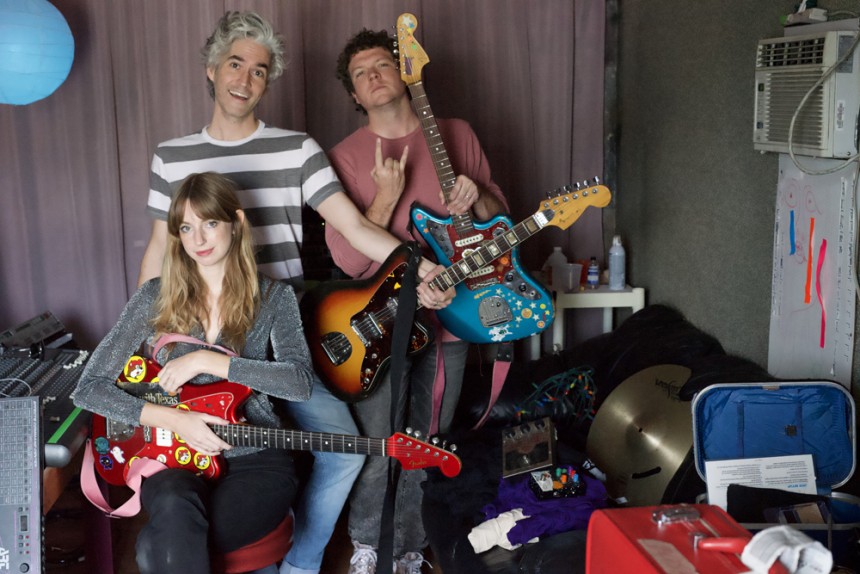 Elliot Frazier: Before The Black Angels existed, there was nothing. There was nowhere to play. But The Black Angels came out and everyone moved to Austin. So that kind of kicked off the psyche scene there. There’s so many places to play, too. You can work on your live performances a lot easier than other places. There’s no gatekeepers to the booking process, you know? It’s not elitist or anything.

M: You guys have been pretty under the radar since your last album release, Pure Mood, in 2015. What has the band been up to during that time?

AG: A lot happened in the past couple of years. We were working on the [new] album and that took a lot longer than we had anticipated because [Frazier] had a kid. And he’s about to have a second one on the way.

EF: Thank you. When Pure Mood came out, my kid was born right after that in May of 2016. So we started working on the record in October 2016 and then it was just very slow.

M: I see. We assumed that something big must have happened at that time.

AG: A baby happened. And [Frazier] built out our practicing space into a recording studio and does all the engineering. Since he kind of is the gatekeeper of that whole thing, we would get in once in a while and then he would have to go, so it was all just slow-moving at first.

EF: For the first seven months or so, we didn’t really know how we were going to record the album, too. We did one song in a studio called The Bubble — the same place that we’d done Colour Trip and Mauve and God’s Dream. So we kind of thought we’d do it there first. But then, we realized it was very expensive and how were we going to afford that, so we tried it in our friend’s place. They had this ranch in South Austin. It didn’t really work out there either, so then we decided to buy a tape machine and do it analog. It was like our only chance. I figured we got to do this now, or else we won’t get another chance to get a tape machine.

M: That’s pretty cool. So the whole album was recorded on a tape machine?

AG: That’s another reason it took so long. It was a big learning curve. We fucked up a lot (laughs).

M: I was actually listening to the new album this morning while I was getting ready. I like how it can be noisy, but it can also be really mellow and psychedelic at certain points, too. I wanted to ask you about the first song. Why is it called “Nagoya?”

AG: They told us that we offended people from Tokyo and Osaka. They were like, they think you like Nagoya more. But really, [Frazier] just made the song while we were in Nagoya.

EF: I was sitting backstage waiting to play, and I had my phone and just made the song on my phone.

Daniel Coborn: It was intro music for before we played, that’s what you were trying to do I think.

EF: I think it was for guitar tuning music, because I like to have some sound happening when I’m tuning and I didn’t make any. Usually, I have this 20-minute long wave file, and I forgot to bring it on my phone and had no way of getting it. I can’t call my wife and be like, hey, can you get that thing, so I just made that song. The night before, we played in Tokyo and I used some new age music from Apple Music, like some spa music, and I didn’t want to use that again so I made that song.

M: You guys have a lot of Japanese fans and you come here often. What’s your favorite thing about performing in Japan?

EF: Add the fact that we get a 90-minute soundcheck. We don’t get that anywhere else, you know? And the people that work at the venues are so professional. That alone makes it a lot better.

AG: But really, the fans are the best part of coming over here. This is our tenth time and it’s so cool to get to see the same people we’ve seen over the past ten years, but also new faces that come out. And so we’ve kind of created, I don’t know, it feels like a family. 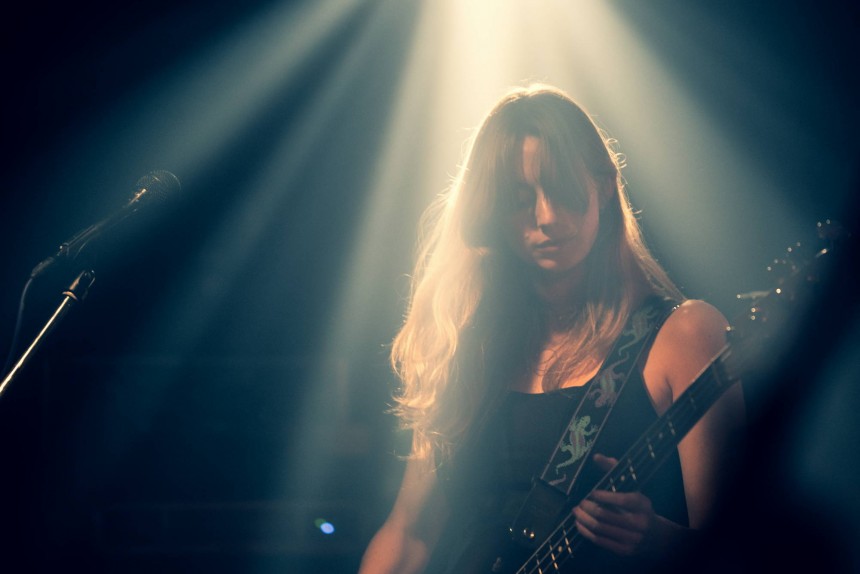 Gehring (pictured) met Frazier in a clothing store in Austin before joining the band. Photos by MASAKI YAMASHITA.

M: Is there a song on the new album that you’re particularly proud of?

EF: The first song we had, “Cotton Candy Clouds.”

AG: I like “In Your Arms.” That one is my favorite.

EF: That song went through a lot of changes before it became what it is. It used to be a rock and heavy metal kind of song.

AG: It was much faster and I just couldn’t come up with a vocal melody. [Frazier] slowed it down and sent it to me and suddenly it just clicked. I was like, I got it!

EF: It was when we got the second tape machine, and it allowed us to get some weirder drum sounds. So we recorded the drums really, really fast and slowed it down a couple of times. That kind of created a whole vibe that didn’t exist before.

M: I like that you can take something that you already have and slow down the tempo or melody and change something. It’s the same lyrics and it’s kind of the same sound at the base but then it becomes a whole new thing. And that’s when you’re like, okay, this is how it’s meant to be.

EF: It’s like when you accidentally put a record on at the wrong speed. That’s the direction I’m going to go, or what I’m trying to do when we get home, is record everything faster and then slow it down. Because you can play it in that key but it doesn’t sound the same as when you slow it down. It’s just, it sounds weirder.

M: I love the album cover for God’s Dream. What’s the story behind it?

AG: It was random. My friend took it. He’s a photographer trying to build out his portfolio and was like, “Can I just come over and take some photos and we can play dress up,” and I was like, “Sure.” And so it had nothing to do with the album. I think I had sent some to Elliot and he was like, “Can we use this for the cover?” When I went to Europe right after that came out, we were touring there, and so many people in Europe were really upset about the cover.

EF: That’s why I liked that picture. It just didn’t make any sense and I knew some people would be all butthurt about it.

AG: I kept having to tell people: It’s a BB gun. Calm down. 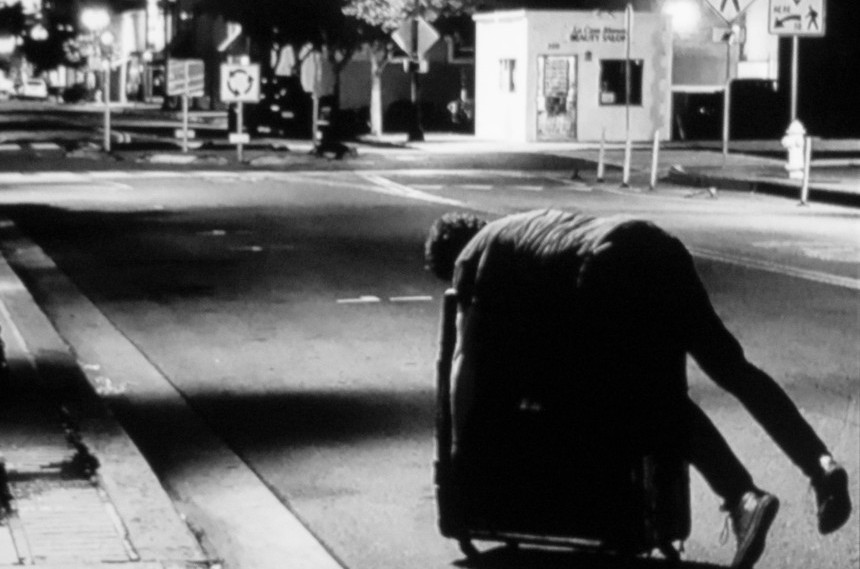 Elliot Frazier on the cover of Ringo Deathstarr’s new LP.

M: Tell us about the photo on the cover of the new album.

AG: Elliot got drunk and laid on top of his amp in the middle of the street. We were loading it and I was pushing him on the amp. He got too heavy and I just left him.

M: Where was it taken?

DC: It was in Santa Ana, California.

EF: It was a Tuesday night. Everybody had gone home and the streets were empty. All the pictures on the album now are from our cell phones, so they kind of look low quality. We didn’t feel that it would be genuine to try and get some super-duper fancy artwork. Kind of like the songs — this is stuff we experience.

M: Is there anything that I haven’t asked yet that you would like to mention?

AG: Just that we’re excited about this new album. I know it’s been, what, three or four years — it feels like forever. So I have high anxiety about releasing a new album again.