A Los Angeles rock band and its wild Japanese fanbase

Los Angeles rock band Starcrawler was a huge sensation when it made its Fuji Rock debut last year. The band has been busy touring across the world and is returning this December for its second Japan tour. Metropolis caught up with the members to find out more about their second album, this upcoming tour and how amazingly crazy their Japanese fans are.

Metropolis: Starcrawler’s first Japan tour turned out great. It was completely sold out and you came back to Japan for Fuji Rock soon after that. How did you find performing in a new country?

S: Fuji Rock is definitely one of the most fun shows we have ever played. It’s actually one of my most memorable. There was just this moment where we locked eyes with each other on stage in front of the crowd and we were like, “Oh my God!” Everyone was so into it. At the end, we invited a bunch of fans on stage and one woman passed out she was so excited. 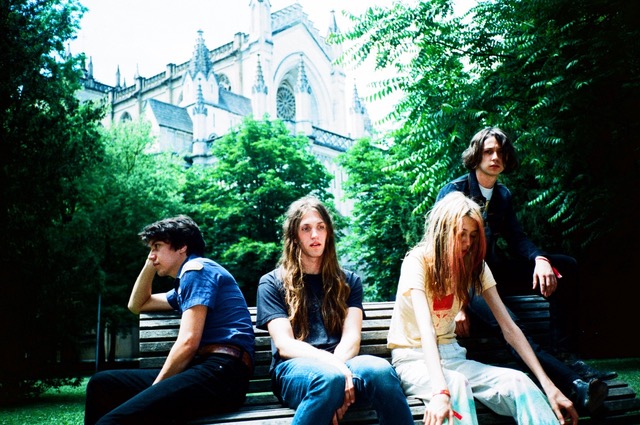 M: You’re coming back to Japan to perform in bigger venues than last time and already have built up a steady fanbase here. Do you think this upcoming Japan tour is going to be a different experience from last time?

S: I don’t know. But I think it will be somewhat the same. We are definitely super excited. Playing on bigger stages might be a slightly different experience but when playing in Japan even in small clubs the crowd make you feel like you’re playing a stadium.

M: Why do you think the Starcrawler sound and performances are so well-received in this country?

S: I think it’s probably because Japanese people work so hard all day, everyday. When the weekend comes, it’s time for them to lose themselves for a couple days. I think our show kind of lets you do that, be free to go wild. No one’s going to hassle you for it.

M: Do you guys still remember the guy in Nagoya from the last tour who was going unbelievably crazy during the show (you guys mentioned him in another interview)? Are you looking forward to seeing him again?

S: Yes, we do! We are looking forward to seeing him again so much! I hope that happens at every single show!

M: Are there any other bands that you are close to or respect from the current music scene?

We’re very close to a band called Skating Polly — we’ve toured with them a bunch. Plague Vendor are great too. They’re from Los Angeles. There’s a lot of great bands out there.

M: What was it like working with Nick Launay?

S: That was a lot of fun. He was a great producer, super fun to hang out with.

M: Is there any theme or concept for the new album Devour You?

S: There are multiple themes for it. It’s about the real things that happened to us in our lives, good and bad things, a lot of frustration, a lot of loss, memories from childhood… Others are just made up — made just for fun.

M: Devour You includes two one-minute songs “Toy Teenager” and “Tank Top.” Both are fast and very punky, I can’t wait to see how these songs will turn out live. What are the inspirations/stories behind these songs?

S: Well there are different stories behind them. “Toy Teenager” is about being frustrated with the fashion world, and basically how they use model bands as cheaper models to sell their brands and rip off their style. I noticed recently that it happens a lot.

“Tank Top” we wrote when we first started out as a band. I found it looking through voice memos on my laptop and was like, “Oh, this is pretty good,” so we figured it out and added some lyrics. It’s about a hot girl at school wearing a tank top, because that’s how immature our minds are. It doesn’t get much better than that.

M: What can we expect from the upcoming Japan tour? Are you excited to see your Japanese fans again?

S: Super excited. I hope they’re just the craziest shows we’ve ever had. Tell everyone to go wild.

THE NOVEMBERS Interview: At The Beginning