Ripples Beneath the Surface

It was a chance encounter with a river spirit in the shadow of Mount Fuji that triggered Thersa Matsuura’s fascination with the mythical world of Japan’s ancient spirits, demons and gods.

Soon after she moved to Shizuoka Prefecture from the Midwestern United States, getting married in 1992, Matsuura and her husband travelled to an isolated temple where they found a statue of an elusive kappa behind wooden bars.

“I had no idea what this thing was,” Matsuura says. “This was pre-internet, so I really had no idea. I just had to describe what I saw and ask people what it was.
The small seaside town where Matsuura lived with her husband was, fortunately, replete with elderly residents eager to share their long-held superstitions. Some, like her mother-in-law, were equally keen to share advice, such as Matsuura’s urgent need for an exorcism performed at a local shrine.

“In order to adapt and not get bitter with this new way of living, I started to deeply study Japanese traditions, superstitions and folklore. I found a wealth of information that I had never seen written or talked about in the English language,” she says. “I had always fiddled around with writing, but now I had a purpose: to introduce this little-known, fascinating side of Japan to an English-speaking world.”

Matsuura learned that kappa are said to be found near rivers, lakes and ponds across Japan. The clever, puzzle-loving, scaly-skinned creatures are child-sized but possess incredible strength. Their favorite foods include cucumbers and entrails. Though sometimes fun-loving and playful, legends are filled with accounts of the creatures rising from the depths to drown livestock and human prey. In some areas of rural Japan, pictures of the reptilian humanoids adorn signs that warn of dangerous river currents and other swimming hazards.

Kappa are part of the legion of fantastical creatures who have evolved over generations through the retelling of ancient folk tales rooted in Buddhist and Shinto texts. There’s the Kishibojin, a demonic mother of a thousand children who sees the error of her ways after she is chastised by the gods for repeatedly kidnapping human babies whom she feeds to her own children. There are forest spiders who feast on human brains, spectral mountain witches eager to strike a bargain with unsuspecting humans driven by short-term gains, and disease-spreading ogres who are said to be the miserable reincarnation of utterly wicked humans. 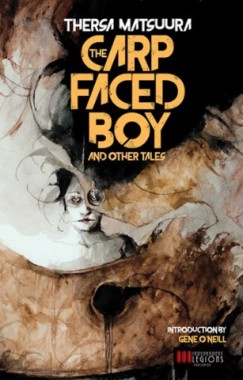 It’s this imaginatively contorted cast of characters that inspired The Carp-Faced Boy, Matsuura’s collection of short stories released in early 2017 by Independent Legions Press. The 10 stories in The Carp-Faced Boy are not mere retellings of ancient tales. Instead, Matsuura uses her fluency in Japanese and deep knowledge of Japan’s folkloric pantheon to weave new tales of terror, dark mystery and intrigue in a genre of writing she likes to call mythical realism. In one story, a middle-aged, childless couple discovers the Kishbojin’s remote mountain shack by getting a friend to hack his way into a young monk’s iCloud account. Another features an overworked salaryman who trades the daily grind and family life to become the lonely groundskeeper at a rural temple, where he enters into the dangerous business of negotiating with an apparition that visits in the night.

Each story entertains with vivid, suspense-laden writing, but the tales creep under the skin and linger because their characters — both human and otherworldly — ultimately share the shortcomings and desires that define the human condition: desire, apathy, love, hate, regret, hope.

“My aim is to tell a fascinating, emotional story that teaches the reader something they didn’t know before reading,” Matsuura says. “I’ve recently been researching old Japanese fairy tales and then asking myself how can I tell this story in a different way, maybe to get a different emotional response, something other than a moral heavy tale.” 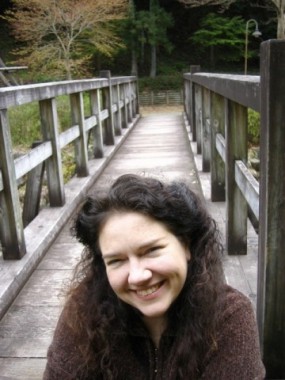 Matsuura also shares her discoveries about Japan’s spirit world through a new podcast called Uncanny Japan. Matsuura routinely heads down to the seaside or into the forest near her home to record her monthly dispatches. The wind, water and birds in the background are a fitting backdrop for the sharing of stories and discussion of a folk tradition in which rocks, rivers, mountains, trees and other natural elements all brim with spiritual significance. Patreon subscribers are rewarded with a recorded “bedtime story” or Matsuura’s colourfully illustrated images of her favorite mythical creatures.

“It’s very fascinating for me, who grew up with Western folklore, to read these stories,” she says. “The way they’re told, unfold, and their lessons are so different. I think this gives me a different way of looking at storytelling. It frees me up to experiment in ways different from what I’m used to or grew up with.”

The dispatches give Matsuura’s fans and curious Japanophiles alike a sense of where the characters that populate her work originate and how they’ve evolved over the centuries. What’s more, listeners can learn why it’s so important to heed the warnings next time they spot a sign along the riverbank adorned with a faded image of a hungry looking kappa lurking just below the water’s surface.

For more information about Matsuura’s work, including a link to her podcast, visit www.thersamatsuura.com.