While stories about human rights abuse increasingly dominate mainstream media channels, first-hand accounts from individuals who have been impacted by it are not as often heard or broadcast.

The stage play Seven puts the focus on the real-life experiences of seven women from different countries. The show, classified as a “documentary play,” takes interviews with these women verbatim and renders them into monologues and scenes. 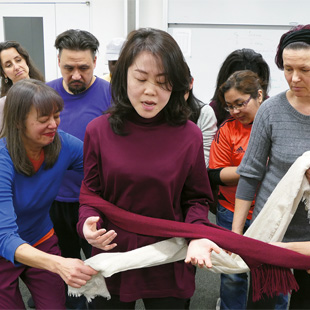 “Most people are not familiar with this play. It’s relatively new, and most people don’t see it as a typical play: it’s monologues by seven women that are patched together,” says Rachel Walzer, director of Black Stripe Theater’s upcoming production of Seven. “The women don’t relate to each other. It’s not a story about seven women; it’s seven stories that happen to be spoken in different places.”

Written by seven women playwrights in collaboration with the characters’ real-life counterparts, Seven addresses such topics as domestic abuse, poverty, rape, and the marginalization of women. The stories within feature the likes of a Russian woman who founded the first domestic abuse hotline in her country when there was no support for victims; an Afghan activist whose life was threatened because she delivered medical aid to women who were oppressed under Taliban rule; a Nigerian woman who is helping provide impoverished young women with education and opportunities; and a Pakistani woman who was gang raped, brought her rapists to justice, and improved conditions for women in her community. 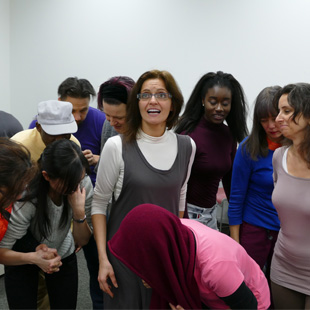 Walzer explains that, while these women come from different countries, cultures, and religions, their stories share some unifying factors.

“The common denominator is that they suffered horribly simply because they are women in their societies, or because they’re poor women in their societies. They were abused, their rights were abused … The other common denominator—and this is what makes them all heroes—is that they were victims but eventually they overcame their victimhood, and they became leaders and educators in their own communities.”

Premiered in New York in 2008, Seven has been performed internationally over the years, from Sweden and Argentina to Nigeria and India, and the script has been translated into 25 languages.

While many productions of Seven are performed as a series of read or spoken monologues, Black Stripe’s production aims to tell the women’s stories more vividly through scenes that incorporate music, dance, and other art forms. After most performances, the production crew and cast will also hold discussions to share thoughts and ideas with the audience about the issues.

“It’s not a typical play. It’s based on these seven patchy monologues, and we’re adding visuals and sound to it,” Walzer explains. “If people come with that understanding—it’s monologues that have been enhanced—I feel they will walk out intrigued and hopefully satisfied.”

“Having different actors, music, [and] dancers creates a connection, not just with the audience but between the different situations,” says Sarajean Rossitto, who is producing Black Stripe’s Seven as well as acting in it. “The universality is the underlying thing about any human rights issue. But it’s easy to say, ‘That’s their culture. That’s the way people think in that society. I wash my hands [of it]; it has nothing to do with me.’”

Rossitto also addresses the pertinence of performing Seven in Japan, stating that the struggles present in the seven women’s countries also exist domestically, albeit in a different way. 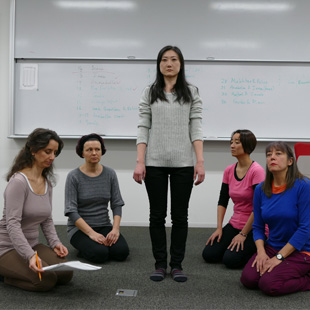 “Compared to the other topics, [domestic abuse is] something that people have heard about but don’t actually know about in Japan,” states Rossitto. She also comments on Japan’s limitations on freedoms of speech and assembly, experienced by the woman in Nigeria; limited access to obstetricians and gynecologists for women in rural Japan; and human trafficking, an issue explored in a scene describing a Cambodian woman’s fight against sex trafficking in her country. “Every topic, we can find a connection.”

While the play explores heavy subject matter, Walzer hopes that audiences can take away positivity and have important conversation.

“I hope people in that theater appreciate the artistic presentation of the show; however, not leave the theater thinking they saw a show,” the director states. “I’d like them to leave the theater feeling that they’ve just been in a conversation with people who have shared the most raw, honest experiences in their lives … I’d like audiences to feel they could be asking questions, igniting more of the topic, and, cliché, but do something about it. Or empathize in a way that things can improve in your own family, or out there in the world.”