Lactose Intoler-Art proves even foreigners can be fashionable 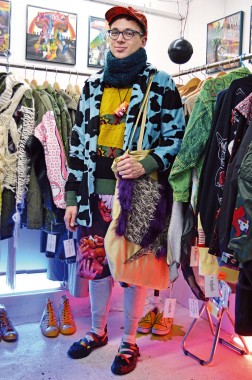 At its best, Tokyo fashion can be pretty intimidating even for Japanese people, and it can be all the harder to win real approval from the scene as an outsider.

However, there are a couple of good role models for foreign fashion fans to prove it’s possible to make a name for yourself—as well as give something back. Today’s subject is artist and designer Lactose Intoler-Art, known on the streets of Koenji for his ‘90s-infused avant-garde stylings. The American was originally inspired by Tokyo street fashionistas; now, they’re the ones wearing his designs.