The Beauty of the Japanese Bagel

Where to find some of the best bagels in Japan

The slightly sweet and oh-so holey bagel lies at the very center of who I am. My hometown, Philadelphia, is a Jewish bagel paradise second only to New York, and there is no doubt that one of the hardest parts of life in Japan is the lack of access to a proper bagel: warm and fresh out of the oven, dense and yet soft; hand-rolled, so a little lumpy.

I was raised in a city where the average bagel shop dishes out better rolls than you can find in 30 U.S. states, 42 Japanese prefectures and 167 countries. So my initial instinct is to decry the lack of bagels in Japan. But when you go to the right place, you’ll find that the Japanese bagel, more pastry than bread, is a rare, unexpected treat. 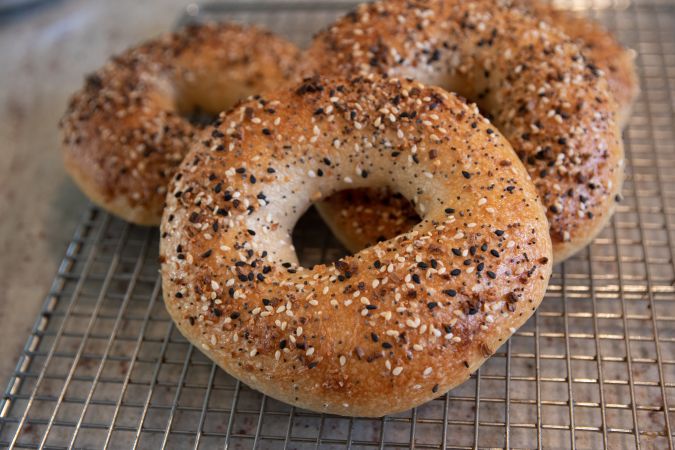 Find out where to get the best bagels in Japan.

Even at your local bakery, an elusive bagel is often worth it. A good Japanese bagel, made on premises with local flour, salt, yeast, malt and sometimes sugar, is a little bit lighter than the American bagel, a little sweeter and smaller. Less chewy, almost never mealy. Fluffier. Others, honed with dedicated craftsmanship forged abroad, are sound imitations of New York’s finest: large, warm and lumpy, soft and chewy.

Japanese bagels are also served up in a surprising diversity of flavors, even daring combinations. Not too different from how sushi restaurants in the U.S. toss in mango and avocado, Japanese bagels aren’t afraid to break tradition: they are versatile, anything-goes sandwiches. Copies of the canonical bagel sandwich—a jumbo everything bagel with lox and slathered-on cream cheese—can be found alongside something more closely resembling the Danish pastries in an upscale panya (bread shop)—a doughy banana bagel with a dusting of cinnamon sugar.

It feels like a miracle that good bagels exist in Japan at all. (Good Mexican food certainly doesn’t.) No one knows when the first bagel came to Japan. Bagels have been widely consumed by Ashkenazi Jews since the 17th century and were a staple of London’s Brick Lane district by the mid-19th century. In the United States, 70 bagel bakeries were established in New York City’s Lower East Side by the year 1900. It’s entirely possible that early Jewish settlers in Yokohama—which, according to cemetery evidence, had a community of around 50 families in 1895—were already serving up bagels on Kannai’s historically international Sakura-dori. Or that there was a 19th century bagel bakery up on the Bluff, which is home to bagels at Bluff Bakery to this day. 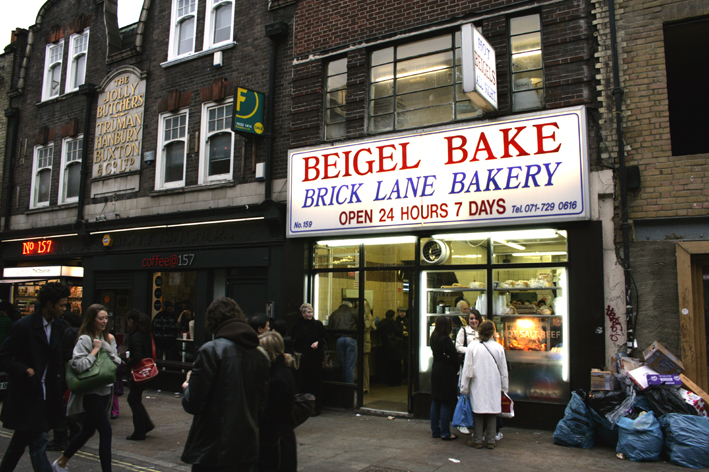 It’s only fitting that we’ll never really know, since the bagel’s origin is a fiction in the first place. According to legend, 17th century Polish King Jan Sobieski ended a decree limiting the production of bread to the Krakow baker’s guild, allowing Jews to bake their own bread. Later, when Sobieski defeated the Turks at the Battle of Vienna in 1683, a baker made a roll in the shape of the king’s stirrup, and called it beugel, the Austrian word for stirrup. Voila!—the bagel was born. (As the bagel historian Maria Balinska comments in her book, “The pairing of a Polish warrior king and a small Jewish bread roll is entirely fictitious.”)

As more bagels pop up across Japan, perhaps one day the Japanese bagel will get its own legend. Maybe Emperor Showa enjoyed a bagel as a gift of gratitude from the Russian Jews who escaped via Siberia to Japan during the Holocaust. Regardless of how it happened, it’s clear that a tradition of culinary craftsmanship and a growing love for bread has contributed to the unlikely existence of delicious Japanese bagels. So here’s where you can get yourself one.

With more than 50 locations all across Japan, BAGEL & BAGEL is your best bet for a representative Japanese bagel. Small, soft and tasty, and served in every imaginable flavor under the sun, these bagels are a solid choice that makes the difference between American and Japanese bagels as clear as day. Hokkaido Melon, Lemon Green Tea and Soy Milk and Edamame are just a few of the more outlandish flavors, and savory chicken teriyaki and shrimp avocado bagel sandwiches cap off a well-rounded sandwich menu. Not advised if the only thing that can satiate your craving is a traditional New York bagel but delicious nonetheless.

Arguably the best bagel in Japan, this hole-in-the-wall Shirokane stop is well-known among Hiroo and Azabu residents and across the city. The owner has experience making bagels in New York, so the NYC-style imitation is a smashing success: big, chewy, dense and slightly soft. The ten available flavors cover the standards like sesame, poppy, cinnamon raisin and blueberry and you can even make your own sandwich. Cream cheese portions as well, in true New York spirit, are absolutely gigantic. 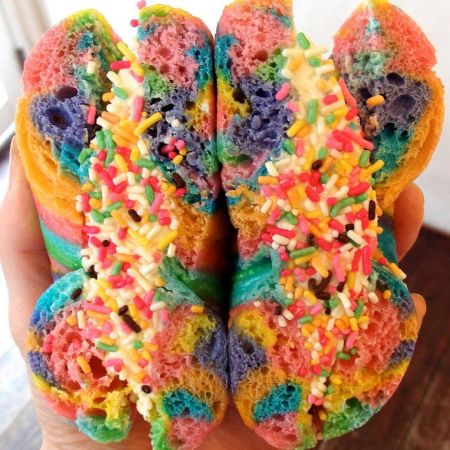 Another Minato-ku bagel joint goes a little overboard with the New York theme décor, but actually represents a nice fusion between Japanese and NYC-style bagels. The offering is a little sweeter, softer and fluffier than the bagels found at Maruichi or Bagel Standard. Traditional NYC flavors and toppings make for a distinctive fusion of the New York and Japanese bagel.

One of the best bagels outside of Tokyo resides in a humble, rustic cafe with a Japanese interior near Chushojima Station in Kyoto. A little bit off the beaten track, to be sure, but the firm and yet soft, expansive bagels are well-worth the trek. Apple-cinnamon cheese and black sesame sweet potato make for especially unique flavor choices. 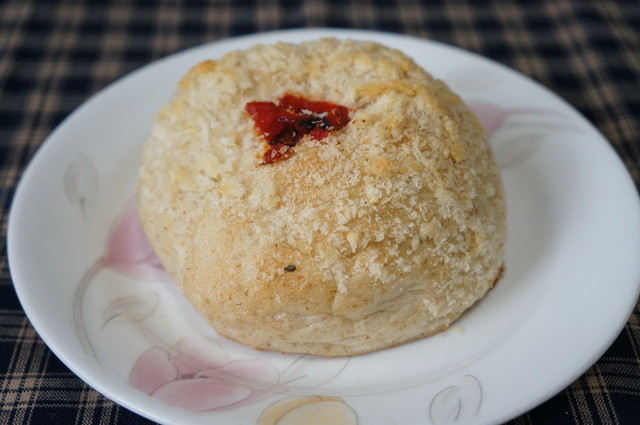 With an old Jewish community dating back to the 19th century, Kobe would have to be the one city outside Tokyo to go on a bagel hunt. The best is Marzi-pan, which makes lumpy, fluffy bagels available to residents of Kobe on the cheap. Well-loved by locals, the bagels sell out fast, even on weekdays, and the variety of flavors runs the gauntlet of experimental Japanese bagel flavors: sweet potato, black sesame and red bean, chocolate and more.