Japan is in the midst of a surfing boom as more people take to the sport than ever before. As dynamic, wave-rich coastlines go, Japan’s southernmost Kyushu Island can compete with the world’s best surfing destinations. What it lacks in wave consistency, it makes up for in quality and diversity. This, along with a passionate community of local surfers, is putting the region on the global surf map.

Generally, surfers categorize types of waves by the bottom contours of the shoreline they break over. A reef is known as a reef break, a sandy beach is known as a beach break, an abrupt slab of reef is a slab, and a long headland or curved section of coast is a point break. Kyushu has all of these setups positioned within its curvy coastline. When there’s a distant typhoon, a Siberian cold-front, or a local monsoon, wave energy is produced, which slides into the island’s beaches, inlets and bays with ease.

Nearly every coast on Kyushu has access to surfable waves. The island’s north is more populated and less consistent than the south, yet it still has quality waves throughout the year. Fukuoka, the island’s largest city, gets wave energy from the Sea of Japan. The nearby Itoshima peninsula and Futamigaura Beach are the most consistent spots near the city and work best in the winter.

The island’s east coast from Saga to Kagoshima has plenty of surfing potential. In the winter, these spots shine and the diversity of setups can be discovered by driving along highways 3 and 270. Kagoshima’s Ei-Guchi Hama, in the city of Hioki, is where Kagoshima City’s surfers venture to. It’s somewhat consistent, crowded and occasionally becomes full of beautiful challenging waves.

On the southern end of Kagoshima’s Satsuma Peninsula sits the small town of Ei, where green tea fields and one of Japan’s most strikingly photogenic volcanoes paint the coastline. Here, Daichi Ikemizu became prompted to start the summer X-games-inspired event called Ibusuki Summer Breeze. Held in the town of Ibusuki, this one-day event provides surfing and skating lessons for young people, live music and environmental outreach.

When asked about his inspiration, Ikemizu says, “I noticed the lack of choices for ‘things to dream about’ given to Japanese boys and girls. Boys play soccer or baseball, and girls play volleyball and badminton. I wanted to offer new options such as surfing and skateboarding.” Ikemizu’s message is simple: develop a love for surfing and the environment in local children and secure the health of the wave-rich coast for future generations. 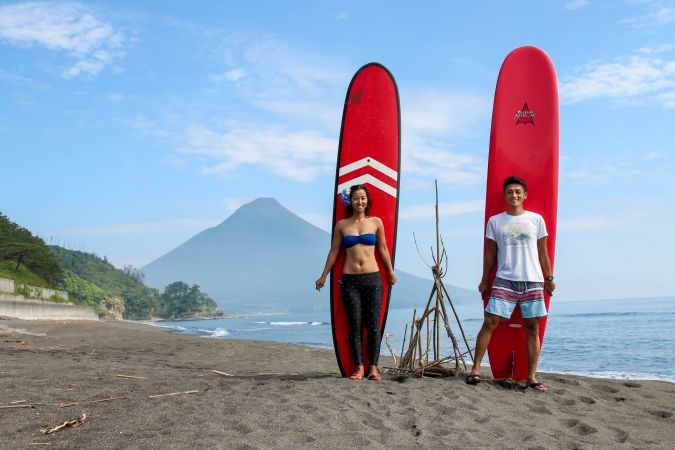 Surfing has been in Japan since the end of WWII when the American military introduced wave riding in Yokosuka. It wasn’t long until surfing spread to Kyushu Island and took off in the city of Miyazaki. For decades the city and the nearby Nichinan coast benefited from domestic tourism thanks to its marketability as a sub-tropical honeymoon destination. Because of its laid-back vibe and palm-tree-studded coastline, many ocean lovers moved here and championed the local surf scene.

Miyazaki would eventually host several international competitions where the world’s best athletes competed in world-class conditions. Local pride for Miyazaki’s quality surf exploded and so too did the city’s competitive drive. All this culminated into a thriving surf community that’s a breeding ground for Japanese professional surfing talent.

Miyazaki’s coast from Nobeoka in the north to Shibushi, Kagoshima Prefecture, is littered with surfable beaches, reefs and points. Starting from the north of the prefecture is Okuragahama, a consistent beach break that is perfect for beginning surfers.

In Miyazaki City, the most famous wave is the quality breach break Kisakihama which is where the famous surf competitions are held including the ISA World Games which served as an Olympic qualifying event for surfing’s Olympic debut.

Further down south is the town of Aoshima and its SoCal-Esque beach break Aoshima. Palm trees, crowded lineups and surf tourism reminiscent of Australia’s Gold Coast make this stretch of beach Kyushu’s surfing capital. If you’re in the market for surfboards, lessons, or apparel this is your destination.

Further south, things become wondrous. The world was introduced to Kyushu’s power when, in 1991, North American World Champ Tom Curren paddled out into no-man’s-land. Typhoon Orchid’s relentless winds produced 30+ foot wave faces. Curren paddled out into a jagged reef and caught what would go down to be one of the most famous waves in Japanese surfing history. This point was forever coined “Curren’s Point,” and the surfing world’s attitude towards Japan’s wave quality was forever altered.

From Curren’s Point south is the rugged Nichinan coastline. This area is for experienced surfers only and many of these spots are localized. During strong typhoons, large waves roar onto the shallow reefs here producing fast and hollow waves that are perfect training grounds for pros. It’s a spectacle to witness.

Matt Dursum is a freelance writer based in Latin America. He often writes about food, wine, travel, and surfing. For more of Matt’s work check out his website at wayfarersoliloquy.com