It’s clear that Japan has a soft spot for the Peanuts gang. Since Charles M. Schulz’s comic strip about world-savvy, round-headed kids and a wildly imaginative beagle was first published in Japan in the late ’60s, Peanuts has earned stores, theme park attractions, and exhibitions around the country devoted solely to it.

However, a visit to these Peanuts-themed establishments generally leaves one with the nagging feeling that maybe Japan isn’t as in love with Snoopy, Charlie Brown, et al as it is in love with the idea of them. That perhaps their popularity is attributed solely to the familiarity of the characters and Schulz’s endearing drawing style, rather than the philosophical subtexts of the strips (and specials) that brought the humanity out in the characters. After all, Peanuts never was a story about cute kids, dogs, or birds; it was always about the bittersweet experience of going through childhood. 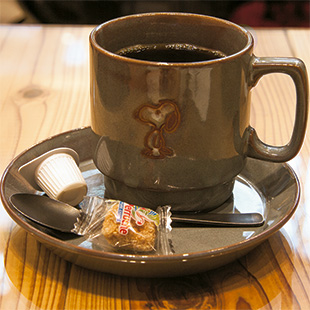 Snoopy on your mug
(Photo by Martin Leroux)

So upon hearing that a café had opened in Nakameguro devoted to the strip, I had anticipated a flashy eatery decked out with images of Snoopy, Woodstock, and Belle—Snoopy’s sister, who is somehow famous in Japan despite rarely appearing in the strips or cartoons—and little else to offer.

What awaited, however, was a coffee shop that was as much a loving tribute to the comics as it was a quaint little eatery.

The Peanuts Cafe humbly overlooks a quiet street beside Meguro River, with a sign hanging over its doors showing the world-famous beagle’s grinning mug to let visitors know they’re there. And the neon sign on the window that reads “It’s not eating, it’s dining” promises good food.

Inside, the café exudes a very chill West Coast vibe, and its sophisticated, minimalist decor makes the entire first floor feel spacious even when full. Like the landscapes in the strips, the café never feels too busy. Aside from the rack by the door selling merch, the Peanuts aspect of the interior is also quite subtle, yet effective. The register counter is obviously styled after Lucy’s psychiatry stand, holding up a two-line menu board. Printed on the walls are comic strips, as well as a quote from Schulz about what makes Charlie Brown who he is.

It’s a bit cozier on the second floor, a retro space decked out in vintage Peanuts paraphernalia, ceiling lamps made with comic strips, and a neon Woodstock flittering away on the back wall. 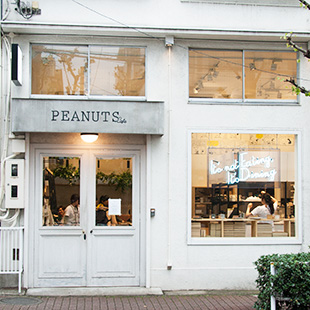 The menu is equally devoted to Peanuts. The snacks in particular draw inspiration from the ’50s malt-shop treats and campfire staples Charlie Brown and the gang enjoyed; some dishes are taken straight out of the strips.

Taking its name from Snoopy’s camp leader persona, The Beagle Scout S’mores (¥1,680) is a steaming pot of gooey, melted marshmallows, served with graham crackers and sides of chocolate, dried fruits, cereal, and raspberry sauce. For those who prefer their marshmallows on hearty beverages, the Roasted Marshmallow Latte (¥800) delivers.

Given the gang’s love of shakes, it’s only fitting that they’d be on offer here too: the Peanut Butter Milkshake and the Chocolate Chip Milkshake (both ¥880) are both rich, thick concoctions that do not disappoint. The Root Beer Float (¥750-830) is a simple, sugary treat, using the WWI Flying Ace’s drink of choice after a day of chasing down the Red Baron.

Other dishes, however, are more abstract in their Peanuts references. The Goose Egg Sliders (¥1,800)—a set of four sliders, each with different fillings, stuffed between artwork-imprinted buns—is named after a baseball team Charlie Brown coaches. Lucy’s Honey Lemonade Salad (¥1,260) takes from the lemonade stand Lucy uses to carry out her psychiatry, infusing fresh greens with a zesty citrus dressing—though the Lucy link is kind of a stretch.

The freshly-baked Cherry Pie (¥700) is a fruity dessert that is just the right amount of sweet, served a la mode—and while not directly Peanuts-related, complements the café’s Americana theme and is something you can imagine one of the gang’s trombone-voiced parents baking.

The Peanuts Cafe is birthed of genuine affection for the strips, built with meticulous attention to the world Schulz created and that the kids call home. It’s still very much a commercial dining place, but it’s got heart. Casual visitors can enjoy the relaxed atmosphere and the tasty numbers on the menu—but it’s the Peanuts fans who really get the treat.

Note: Given the café’s popularity, reservations are strongly recommended.

The logic behind Tokyo’s café for stuffed animals