Like many craft beer bars in Tokyo, Ushitora hides itself among the maze of tiny shop and café-filled streets of Shimokitazawa. Beer lovers who make their way down the dead-end lane behind a department store, though, will find themselves in a veritable treasure trove of craft beer. 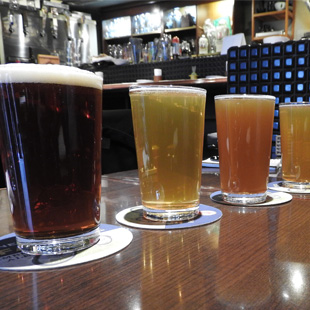 Divided into two slightly different establishments, Ushitora One, a sit-down restaurant, opened 10 years ago, when Japanese craft beer was just a blip on the screen. Its extensive food menu runs the gamut from hearty curry to homemade French fries. Ushitora Two, a standing bar, offers a limited food selection—kushiage (fried things on a stick) and oden (stewed hot pot)—and was set up seven years ago as craft beer began coming into its own. Literally just steps away from each other, Ushitora One and Two are completely non-smoking.

Roughly 35 craft beers are on tap at any given time, the majority from Japan, nearly ten of which are from Ushitora’s own brewery in Tochigi. The selection includes Jihen, a Gose brewed in collaboration with Kyoto Brewing. 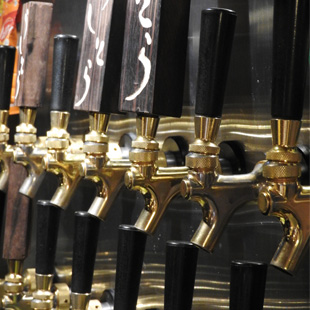 Opened just one year ago, Ushitora’s two brewmasters lean toward American-style IPAs, which means the flavor trends to the hoppier side of things. Their Yuzu Saison Okkoku was a table favorite with its heady yuzu aroma, while the Rai-jin, an American IPA, was another.

“This perfectly suits my taste,” one companion commented with satisfaction after her first sip.

While the selection of beers on tap in both bars rotates, the list on the night that our group visited included Shiga Kogen, Y. Market, and Shonan Brewery—to name just a few. The real treat, however, included two-hand-pumped ales, the Yona Yona Real Ale and Iwate Kura IPA, which were, sip for sip, as smooth and easy as one might hope. Customers can order freely between the two separate beer menus, although they must fetch it themselves.

The food menu at Ushitora One is divided into hot dishes recommended with beer, heavy foods, and betsubara—food you need a separate stomach for. We sampled something from each category, and would recommend the hiyayakko (chilled tofu with thinly-sliced green onion and myoga), tako karaage (deep-fried octopus), and the Shepherd’s Pie as perfect companions to whatever is on tap. 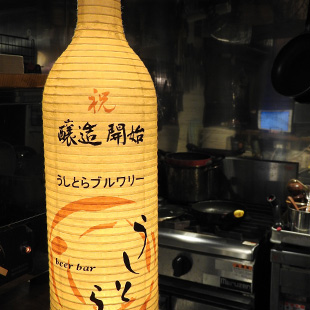 Undoubtedly, Ushitora is a prime place for sampling some of the country’s best craft beer. Between Ushitora One and Two, it’s more than possible to swing in for a delicious break from the action in one of Tokyo’s most happening spots. Kampai!