It’s not old-school roller-skating, and not entirely like the movie Whip It. Local female roller derby teams possess punky edge and athleticism, minus the drama.

“There’s no clothes-lining,” says Zama Killer Katanas (ZKK) president Naomi Begley (skater name: I AMRAAM). The ZKKs compete with a number of local women’s teams, including Tokyo Roller Girls (TRG), Yokosuka Sushi Rollers (YSR) and Yokota Scary Blossoms (YSB), all of which are always on the lookout for new skaters. 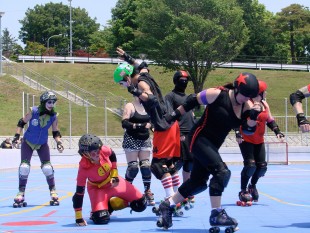 “Anybody with the interest, dedication and ability to acquire the proper gear can join us,” says TRG’s Patricia Hellga (skater name: Hammerhead). Bouts consist of shorter matchups called “jams,” for which each team picks a “jammer,” or scoring player, to snag points by lapping members of the opposing team. Teams assist their own jammer by hindering the one on the opposing team—essentially playing offense and defense at the same time.

“It does take athletic individuals, [and] it is a contact sport … But you surprise yourself,” says former ZKK president Sally Santiago (skater name: Bouta HurtYa). Begley adds, “We come in all shapes, sizes and colors.” Both Begley and Santiago agree most women get involved to get in shape, do something new and give their confidence a boost. Proclaims Santiago, “It gives you a different sense of self.”

Lady derby is played by approximately 1,250 amateur leagues worldwide, governed by the Women’s Flat Track Derby Association (WFTDA). Rules and safety are sacred, with trained referees, non-skating officials (NSOs) and players pitching in to securely and accurately tape down the rope that either reinforces or delineates the derby track at bout sites. “There are rigorous rules as well as written and physical tests,” says Santiago. 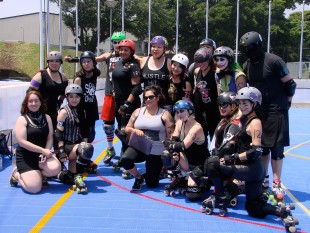 More than just a sport
(Photo by Aly Lawson)

Many teams run a special introductory session for beginners, focusing on the fundamentals needed to pass the WFTDA basic skills test. In addition to running a weekly basics session, TRG also offers a monthly “fun skate” event. “We just get together to skate for fun and then go for food and drinks after,” says Hellga. “Once the skills test is passed, the new skater can bout.”

The teams are close, each a community of comrades that extends beyond the rink. “It’s really probably one of the most team-oriented sports you’ll ever see,” says Santiago. YSB’s Nina Duritsky (skater name: Chu-Hi Samurai) adds, “We can beat each other up and give hugs afterward. That’s what I’m talkin’ about!”

“We’re all trying to bring derby to the greater public and give it greater visibility,” Hellga says, adding that their main challenge is space in Tokyo versus funds. “Up to this point, all of our league’s bouting has happened on military bases—for which we are so grateful. At the same time, I think that finding an off-base venue is key to spreading derby in Japan and getting seen by the public at large.” In fact, most gym floors are of a high enough grade for derby, and the skate wheels are smooth and don’t damage these floors, no matter how heated the bout gets.

The fall schedule includes a number of tournaments, fundraisers, double-headers and all-star bouts. There’s also a junior league for ages 7-17, and the teams are always on the lookout for refs and NSOs. No experience necessary—the team will gladly teach you how to skate.