A surreal underwater journey in the heart of Tokyo

[Sponsored] For many, goldfish are inextricably linked to memories of childhood. Goldfish are oftentimes a child’s first pet and therefore their first brush with responsibility. The survival of a goldfish relies on the goodwill of the child, who must feed their pet and clean out its tank. It is also through the goldfish that a child first experiences loss and learns how to overcome it — when the time comes for the child to place their aquatic friend in the toilet bowl, ready to flush, parents take their cue to inform their child of the concepts of life and death.

While the experience of owning and taking care of goldfish is nothing more than formative childhood moments for most, it is a life’s work for artist Hidetomo Kimura. Kimura is credited as the first and only artist working to combine elements of art and design with aquariums, a concept he has been exploring for the last decade through his project, Art Aquarium, an annual exhibition that elegantly arranges thousands of goldfish in a living installation.

This year’s installation reimagines Ryugu-jo, the mythical underwater palace of the dragon god of the sea. The castle, which appears in folklore found in East Asian mythology, is most famous in Japan as a part of the legend of Urashima Taro, a fisherman who saves a turtle and is invited to Ryugu-jo. The main gate of the palace is the central piece of the exhibit, inviting patrons to experience firsthand one of Japan’s most beloved legends.

Up to 8,000 goldfish of many varieties — including pearlscale, veiltale, ranchu — swim in angular aquatic tanks placed throughout the darkly-lit exhibition. The space is illuminated by neon lights, which refract off the tanks and glow hypnotically and seductively. At night, the exhibit caters to an adult crowd, where Japanese and international DJs spin ambient, electronic music and a bar serves sake as well as original cocktails.

What transpires is a moody, colorful atmosphere and a way of experiencing goldfish removed from our innocent, sepia-toned childhood memories. There is a decidedly dream-like quality to the exhibit that borders on the psychedelic — if there is such a thing as an afterlife for goldfish, a mystical realm where all good fish end up after being flushed down into the abyss, this is it.

This year, Art Aquarium returns to Nihonbashi between July 7 and September 24 at Nihonbashi Mitsui Hall, located on the fifth floor of COREDO Muromachi 1. The exhibit is open from 11 am until 11:30 pm, with live music and the bar starting at 7 pm (subject to scheduling). Frank Muller, a pioneering DJ from the Berlin underground club scene, will have a live set on Saturday, August 5, and a host of domestic DJs and producers, including KEN ISHII and Jazztronik, are also set to perform.

The theme unifying all of Kimura’s work is “Edo; Kingyo no ryo,” which translates to “Edo; the coolness of goldfish.” Though something is lost in translation here, the theme is significant because of the historical link between the Edo Period and the culture of cultivating goldfish in Japan.

Goldfish were imported from China during the Muromachi Period, when samurai, rich merchants and the upper class enjoyed collecting different varieties to keep in ponds on their estates. While goldfish were initially enjoyed exclusively by the privileged and the wealthy, their popularity spread to the lower classes during the Edo Period, and it is said that the culture of commoners appreciating goldfish has its origins in Nihonbashi.

The individual installations that make up the exhibit represent a unique aspect of goldfish culture in Edo — in particular, Nihonbashi — and together form a historical narrative. This makes Art Aquarium an informative exhibition that is perfect for a kids’ outing, too, with plenty of educational merits — albeit without painful porcelain goodbyes. 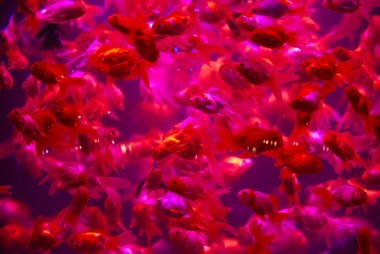 Free entry for childen aged 3 and younger
*prices include tax.

Children aged 12 and younger need to be accompanied by a guardian.

Tickets for people in Japan: artaquarium.jp/en/nihonbashi2017/#ticket

Tickets for people outside of Japan:
eplus.jp/ib-artaquarium/ (extra fee will be charged)

Reinventing the boundaries of shopping

Celebrate Sea Day without going to the sea