Quiet and unassuming describes not only the studio that bamboo artist Hajime Nakatomi works from, but also the man himself. Based in Oita Prefecture, Nakatomi creates these stunning intricate sculptures. Bent into waves with some of the pieces finished with traditional Urushi lacquer which give the work its gloss, they could easily be mistaken for another material, perhaps a strong type of plastic or a shiny metal, but they are all made with bamboo and rattan.

The strength and flexibility of this natural material allows Nakatomi to work on his craft, his skilled hands working the pliable material into a variety of shapes, from modern geometric prisms, to the more traditional intertwined, criss-cross patterned used in making baskets. His aesthetic is simple and delicate, yet bold and powerful. Looking at just one piece can be quite mesmerizing. 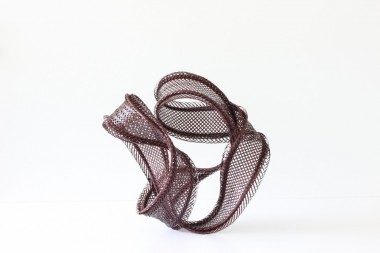 Nakatomi has been working on bamboo art since 2000, and from his studio in Taketa City since 2012. The studio was previously a high school that has since shut down and reused as a place for artists, designers and makers to build and create in a space at favourable rates. This affords Nakatomi a huge area to lay out the pieces that he’s currently working on or practising with.

Nakatomi has won multiple prizes, his work has been displayed in galleries in the U.S and France, and he is often approached to make pieces for hotels and other commercial spaces. Not only does he create, he occasionally teaches students and even tourists who fancy doing some hands-on activities in the area. Nakatomi also forages for the bamboo himself, trekking up into the hills and carrying the heavy shoots back, preparing them, and getting them ready to mould into one of his contemporary complex creations, or a more traditional weaved basket, a process in itself that takes years to master.

Kitty Chan has worn many hats over the years. This time, streetwear meets the Sanrio superstar in a collection of electric red and white sneaks, tees and accessories. Celebrating Puma Suede’s 50-year anniversary, the classic sneakers feature white soles speckled with gold, Hello Kitty with her milk bottle icon print and the signature stripe and toe cap dyed an eye-popping red. The bottom of the sneakers are translucent with a red bow. The timing of the launch, in the run up to Valentine’s Day and the Chinese New Year, will no doubt see this collection hit a sweet spot with fans.

The season of change is upon us, whether it be graduating from school or college, starting at a new school or job, or just getting yourself ready for a slew of Spring events. Sitting in a park on top of blue tarpaulin comes to mind…

Japan is well-known for bringing out many a sakura inspired product. Restaurant menus, coffee shops, and konbinis are often adorned with pink-flower motifs. And people here do go a bit mad for a limited edition release.

With that in mind, Coca-Cola has released its limited edition sakura-themed bottle. The signature red and white has been replaced with a light pink background dominating the whole bottle with large cherry blossom motifs in the background.

Featuring a similar color theme with the same limited edition status, Coca-Cola released a peach-flavored Coke earlier this year, satisfying the season’s demand for peach-flavored goods. The strong peach-scented liquid may not be to everyone’s taste so instead, we have here a classic Coke, in a classic, sleek aluminium bottle. The Japan-only release can be found in supermarkets, convenience stores, and souvenir shops retailing for ¥125.

Here, Lyons gives us his advice, things to think about when starting your own business:

“I believe that for a founder to be extraordinarily successful a lot of people have to be wrong. People thought I was weird when I started studying biology during my masters studies in computer engineering. My PhD professor rejected my proposal to do a research paper on DNA barcodes. Now I’ve been asked to edit a book on the subject. However, it’s not enough in life to be right if you want to have impact, you have to have power to take advantage of the hypothesis… Hence, fundraising skills and relationships are important.”

Having studied Computational Biology and Medical Science at the University of Tokyo, Lyons built a strong network in his field in Japan so naturally, this is where his business began. But he’s well aware of the limits in this country, so a move or expansion of the team to other countries may be on the cards in the future. What really stands out to us is his view on Japan’s software market, “There has never been a global software product that dominates a market that came out of Japan that I’m aware of, unless you count video games. I haven’t observed anything to indicate that a significant number of Japanese people want to try to change this.”