A zombie fun run will be held on Sunday, May 21, at Tokyo City Keiba (TCK) to commemorate the 20-year anniversary of the seminal horror game franchise, Biohazard.

The Biohazard Zombie Rush event will feature a 2 km course that recreates scenes from the video game, where participants choose to either be on the zombie team or the survivor team. In addition to the zombie fun run, there will be a cosplay contest, talk show, zombie makeup booths and a Biohazard merchandise shop. 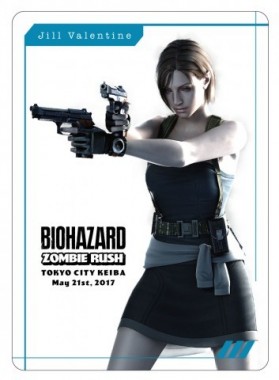 Also known as Resident Evil in the English-speaking world, Biohazard was developed by Capcom for the PlayStation gaming console in 1996. Since its release, the horror-survival game has blossomed into a media franchise, spawning comic books, live-action movies, novels, and animated films.

The Zombie Rush will be an opportunity for fans of the franchise to enjoy the Biohazard universe in an immersive experience — where you can experience the thrill of the chase firsthand.

The rules of the Biohazard Zombie Rush is simple: like a game of tag, the aim of the participants on the survivor team is to not get caught. Survivors are required to wear a special vest, which is provided by staff on the day of the event, and navigate the course while members of the zombie team attempt to take the vest off of them.

Participants on the zombie team are expected to look the part, and they are encouraged to embrace the spirit of cosplay. For an additional fee, participants can take advantage of professional makeup artists equipped with all the tools to make you look like the living dead.

Entry fee starts at ¥4,800, and tickets can be purchased online through Ticket Pia. For more details, visit their website.