Bringing Peanuts to the Movies

Charles M. Schulz’s son on the film, characters, and the strip’s legacy

Peanuts first appeared in October 1950. Since then, the adventures of Charlie Brown, Snoopy, and the rest of the gang have delighted generations across the globe. Now, The Peanuts Movie brings Schulz’s beloved characters to life in 3-D. The following interview with writer and producer Craig Schulz, who is also the president of Charles M. Schulz Creative Associates, took place at the Charles M. Schulz Museum and Research Center in Santa Rosa, the town in Northern California where his father lived and worked until his death in 2000.

What made you decide to write The Peanuts Movie with your son? 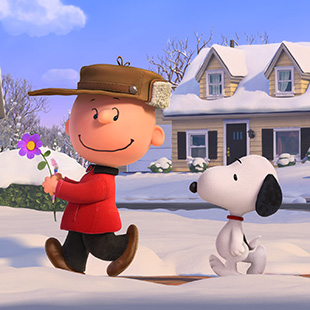 After my dad passed on in 2000, we had numerous requests—people calling up asking if we, the family, would be interested in doing a movie. We had always decided we’d probably never do a feature film, because we didn’t think the risk was worth the reward. But time passed and we started thinking about the possibility.

How does the film remain faithful to your dad’s work? How has it lifted his stories off the page?

Well, I think it’s done it on multiple levels. I will say that there’s nobody who is more protective of my dad’s legacy than myself, and I’ve passed that onto my son. During this process, his admiration for his grandfather has grown tremendously. On the animation side, Steve [Martino, the director] made sure this film was done right. Every animator that came onto the project had to go to what they called “Van Pelt University,” which entailed a week’s training on how to draw these characters.

Can you discuss Snoopy and his role in the film?

I think Snoopy is like all of us, or what we would like to be. He lives the dream life. All he’s got to do is sit on his doghouse and sleep all day long. He gets food brought to him every night. And in the meantime he lives his fantasies. In this film, we see Snoopy driven into this fantasy world of the “Flying Ace” [the character he imagines himself as when fighting the Red Baron]. The story revolves around a couple of origin stories. For the first time, Snoopy takes out the typewriter and types. We see him typing in the comic strip but we never really know why that happens, and in this movie it is explained. We know that for 50 years, he’s been chasing the Red Baron and he’s never been able to catch him. The film explains why he’s chasing the Red Baron.

How did you and the rest of the family inspire your father’s work?

I think he was very inspired by his children in the early years. If you study the comic strips, you realize that from the ’50s to the ’60s, he was coming of age and formulating the direction he wanted the comic strip to take. But from the ’60s to the ’70s, there’s a lot of influence from the children and from his marriage. But he really only gives his children credit for two or three comic strips. The tonal quality of the script changes in the early ’70s when he went through a divorce and married Jeannie (his second wife). There is a softer tone, it feels more philosophical.

What can audiences look forward to?

Our hope is that we reinvigorate the new generation to read Peanuts and come back to the comic strip and embrace the values of these characters. Often these days, there aren’t good messages in movies, as they get more edgy and racy. The nice thing about Peanuts is that, as a parent, you know that you’re going to be in good hands. There’s also humor. It is visually great and entertaining even for very small children.

Peanuts has remained relevant for so long. Do you think your father’s work is timeless?

I think it will continue to be relevant. There is no chance of the interest slowing down. When A Charlie Brown Christmas first came out in 1965, the studio thought it was going to be a disaster. But there was one animator standing in the back of the room who said, “Are you kidding me? This show’s going to run for a hundred years!” Well, it’s been 50 years, so he’s halfway right! I think he is right. People see something in Peanuts that they identify with. In the movie, you see these kids in school, having to do homework, all the things that every kid can relate to—you really feel like you’re attached to them. It’s a group of kids you want to be around.

The Peanuts Movie is now playing in theaters nationwide.