The award-winning writer shares thoughts on place, sound and Twitter ahead of his first trip to Tokyo

Irish writer Kevin Barry may have lived in 17 different addresses by the time he was 36, but this weekend marks his first trip to Japan. The author of two novels and two collections of short stories, Barry’s distinctive literary voice is a blend of dark humor, pop culture and an expansive old-world lyricism, once described as the result of the (hypothetical) procreation of Roddy Doyle and Nick Cave. This year will mark the tenth year of the European Prize for Literature—which Barry won in 2012—and this weekend, he and four other EUPL laureates will participate in a panel discussion alongside a presentation of the winning literary works as part of the European Literature Festival Japan.

Barry’s intriguing latest novel Beatlebone mixes truth and fiction, telling the story of a 37 year old John Lennon traveling across west Ireland in an attempt to reach a remote island he bought ten years previously but cannot find (Lennon did, in fact, own an Irish island and spent time there in the years before his death). It’s intense, nostalgic, slightly bizarre and feels befitting to Japan, a country that has clinged to Beatles fandom far more lovingly than Great Britain or Ireland have. Irish culture, too, holds a fascination to many people in Japan and the organisers of the European Literature Festival are endeavouring to make the country’s rich literary tradition better known and more accessible to Japanese people. During the three-day festival from November 23–25 Barry will participate in various panel discussions and in addition, he’ll be giving a live reading at HMV & Books Shibuya on November 24 from 7pm onwards. Metropolis caught up with the author as he prepares to journey to Japan.

I’ve read that place is often the first spark of inspiration for you. Do you expect Japan to inspire you? Is this your first time to the country?

It’s unpredictable. Some places immediately suggest ideas, stories, prompts, but others can be slower to reveal themselves in this way. But I cannot imagine being uninspired by Japan … it will be my first visit, and I’m very excited about it.

You write about Ireland a lot but at the European Literature Festival Japan, you are appearing as one of many European writers. Do you identify more as a European writer or an Irish one?

Well I’d never approach the desk in the morning and say, okay, let’s do some Irish writing! Or let’s do some European writing! I don’t identify as any particular type of writer… what comes out comes out. I just know that it’s something I need to do. But actually the strange thing about writing is the longer you’ve been doing it, it becomes less the thing you do and more the thing you are. Everything — in terms of your experience, emotions, your life — it all gets filtered through your writerly take on the world. You try to make sure that nothing gets wasted.

It’s harder than it used to be to find a writer who doesn’t Tweet. Any reason why you aren’t active on social media?

Writing is very hard. It’s difficult, concentrated work. When you’re online, your brain is hopping about in a million directions at once, like a demented little frog, and this is not a good place to be if you’re trying to write fiction or drama. Also, I have an addictive personality, and I know if I was on Twitter or Instagram, I wouldn’t be on them in a small way … I’d be all bloody day and night on them. 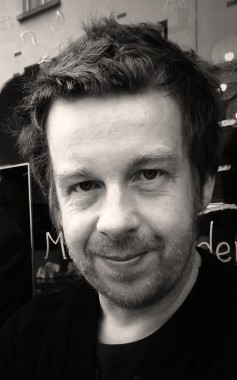 You were a journalist before you were a fiction writer. What similarities and differences are there between journalistic and fiction writing? Do you ever miss doing your column for the Irish Examiner?

Well, you’re using a lot of the same muscles, and journalism can be very useful for a young writer, I think – it takes the preciousness out of it, it teaches you that it’s always possible to get words down on the page, no matter what condition you’re in. But when you’re writing fiction, you’re using a different part of the brain, it all comes from the unconscious, from the back of the mind – you’re using the same place you use when you’re dreaming. I do miss the sociable aspect of journalism and for this reason I like to work in theater a little, also; it means that you have colleagues for a while, people to have drinks with… writing a novel means spending a lot of time alone in a room.

I thought it quite appropriate that you’re participating in a talk about how literature and other forms of artistic expression influence each other, given that you made John Lennon the protagonist in your most recent book, Beatlebone. The sounds in your stories certainly leave a strong impression. Are you musical? Do sights or sounds inspire you more?

I have a theory that many writers are either failed musicians or terrible singers — writing is a kind of displacement activity when you’ve failed at something else. Certainly I write for the ear — I think my stories work well when heard aloud, and it’s been a natural progression for me to write for the stage and screen. I think place inspires me above all… the feeling or vibrations (sorry to be a hippy about it) that a place gives off causes me to want to create something in response to it.

I’m not a Beatles fan but I loved Beatlebone. I found your Lennon quite sympathetic, which surprised me as I generally think of him as a hypocrite and an abuser. Were you a Lennon fan before you wrote the book? How do you view the real Lennon and how does he compare with your fictional Lennon?

I’m by no means obsessive about the Beatles, as many are, but I do like them, and I admire Lennon very much as an artist. I think he’s very difficult to get right on the page because of a naturally capricious nature — if you look back at old interviews with him on Youtube, it’s amazing how much he changes over the course of a single statement. He can go from being very light and charming and funny to being quite dark and thorny inside the beat of a sentence. I think it’s very difficult to say who he was as a person — there’s such a mass of material out there about him, much of it very positive, much of it negative. Nobody had ever been subjected to that kind of maelstrom of fame before. I think all we can say about him for certain is that he was a great and contrary-minded artist, wracked with doubts as all real artists are, and I wanted to get a sense of this into the book.

Are there any Japanese writers you enjoy and why?

About 20 years ago, in Cork city, in Ireland, I bought a novel by Banana Yoshimoto purely on the strength of her name, and I greatly enjoyed it and I have picked up more by her since. Japanese writers are still not translated into English nearly as much as they should be.

I’m looking forward to your reading. What’s the difference between hearing a story out loud and reading it in your head?

I love to read the stories for an audience (I’m a frustrated actor, really) and I think there’s something childlike in all of us that still loves the sensation of being read to. So gather around, children, and I’ll begin…