Brazil has bestowed unto the world many of its art forms. However, very few encapsulate Brazilian culture and history as fully as capoeira does. The Afro-Brazilian martial art fuses acrobatics, dance, and percussive music performance to create an activity unlike any other.

“Capoeira is an amazing experience,” says Mestre Sucuri, instructor at Capoeira Zoador Academy, one of Tokyo’s leading capoeira schools; and has been teaching the art internationally for 26 years. “For me, it’s very spiritual as much as it is philosophical and physical. It draws on every aspect of the human experience.” 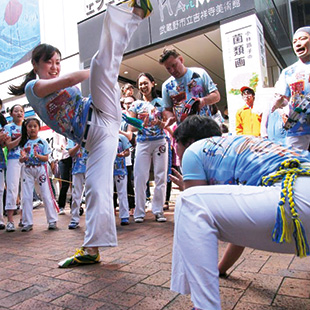 Capoeira is often described as many things: a game; a dance; a martial art; or even a music genre. But at its core, capoeira is its own entity encompassing all its physical and musical elements. In addition to keeping fit, it also allows for creative expression, rejuvenation, and stress relief. And because it’s practiced commonly in a group or circle, the sense of community allows participants to connect and build relationships.

“Everything that people want to do, like yoga, hip-hop, karate … everything is to fulfill your life, something lacking, be it confidence, awareness, pride,” says Mestre Sucuri. “Capoeira for me is very holistic: it’s yoga, kickboxing, karate, samba, salsa—everything rolled into one thing.”

The music is also integral to capoeira—in the same way it is to general dances. Capoeira music has its basis in Afro-Brazilian music, and is heavily percussive and vocal. The rhythms vary and evolve with the vibe of the circle or practitioners.

“Capoeira music is the sound of the energy we create, which we call axé. It’s really powerful when you feel it. It’s almost chaotic, tribal—but organized. Some people say it’s akin to Indian music, but it’s very African in origin. And the rhythms push people in different ways.”

The vibrant experience capoeira provides has led to its increasing prominence internationally. It’s been dispersed outside of Brazil since the 1970s and has recently been gaining exposure in popular culture, being utilized in film and video games.

Japan’s also been catching on to the art, with schools set up everywhere from Tokyo, Yokohama, and Saitama, to more distant areas such as Sapporo, Osaka, and Nagoya. The reason, says Mestre Sucuri, is that it provides a release that’s much needed here—especially in Tokyo.

“It’s a very stressful city; no one works as hard as people in Tokyo,” he affirms. “When you kick that pad or you’re doing Afro-Brazilian dance and the sweat’s running down your face—that’s negative energy being cleansed from your body. 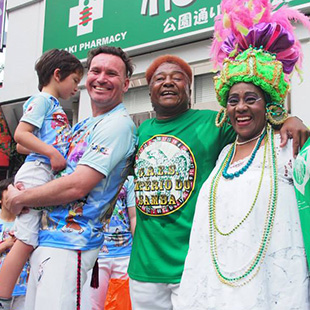 Mestro Sucuri (second from left) at a Samba Festival

“There’s a very spiritual side we focus on [at Zoador]—not religious, but philosophical. Something to get people to go …” he states, sighing with relief.

Mestre Sucuri sees people from all walks of life enter the sunny interior of Zoador’s school in Magome. The students range from kids as young as three to grown-ups around 50 years old, and of all nationalities. But united through capoeira, the students are able to experience the family feeling predominant in Latin culture—yet another aspect of the art.

“I run it like a very grassroots community center,” explains Mestre Sucuri, who mentions that children are in on weekends and have fun, while adults love the energy. “A lot of the foreigners who come here get caught up in that crazy, single vibe here in Japan, and they want a little bit of groundedness; they want to be able to be around that family feeling once in a while.”

Because capoeira is multi-faceted, there’s a place for everyone—regardless of physical or musical ability. The only requirement is patience.

“If you believe in yourself half as much as I believe in the people that walk in [through] the door, then you’ll be fine. You’ve just got to say, I’m not going to be overwhelmed, I’m going to take one day at a time, one class at a time, and move toward a positive result.”