If you’re searching for Trekkies in Japan, look no further than Yokohama International School and Shane Meiklejohn, YIS’ middle and high school drama teacher. Seeking out new tunes and new situations for the Drama/Theater program’s next production, Meiklejohn tossed his love for Star Trek and Shakespeare into the intermix chamber to create something exciting, different and musical: Return to the Forbidden Planet … with pointy ears. 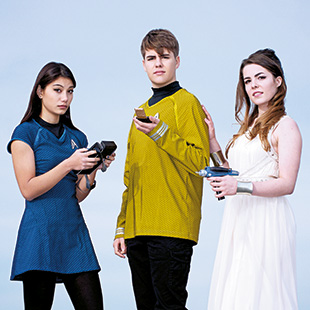 “Mostly we’ve tackled musicals and standard plays from particular time periods, such as Thoroughly Modern Millie set in the 1920s or Xanadu set in the late 1970s, early 1980s,” says Meiklejohn, who has been teaching at YIS for 16 years. “We wanted to try something different this time, more fantasy-based and out of this world. There aren’t many sci-fi musicals around, and we also wanted to try one that was fairly unique.”

While a story based on the 1956 sci-fi classic Forbidden Planet may seem unusual for stage, there’s a thread running through the core of theatre that ties together Robby the Robot and Captain James T. Kirk. That thread is Shakespeare.

The original Forbidden Planet draws upon The Tempest for many of its themes and settings. Bob Carlton, the famed British director, took this a step further in Return to the Forbidden Planet using a mishmash of lines from Shakespeare to create the script for his musical. The words of the Bard are also frequently referenced throughout the Star Trek franchise, with The Tempest quoted by Spock in the classic episode “Is There in Truth No Beauty?” and Data playing the role of Prospero in the Next Generation episode “Emergence.”

It’s this long-running relationship between Star Trek and Shakespeare that led Meiklejohn to his unique take on the Olivier Award-winning musical. “Gene Roddenberry, the creator of Star Trek, actually was inspired by the western wagon trail of American pioneers and aspects of The Tempest and the film Forbidden Planet. In fact, a number of original series episode storylines are based on The Tempest,” he explains. “The characters of Return to the Forbidden Planet fit easily into the framework of The Original Series as there’s a captain, a navigator and a science officer, while the role of Prospero, the mad scientist, could be Khan-like.”

Just as actors on the Star Trek television series have discovered, playing an alien can mean stepping far outside your own nature. “Being assigned the role of ‘the science officer,’ I have felt becoming my character was a bit of a challenge. Because I’m usually a very silly, spontaneous person, it was the exact opposite of my own personality,” explains Arita of assuming the stoic, serious demeanor of a Vulcan.

About the experience of visiting the Star Trek universe, Whiting (Miranda) cited the process. “It’s been a big journey, and working with a great set of actors and people around me has really shaped my acting and the show into something very well done.” India Whatley, who plays the navigation officer, lets the Trekkie pride out, revealing, “I’ve also been enjoying researching about Star Trek.” And Eckhoff, Captain Tempest himself, is into the music. “The mixture of Star Trek and Shakespeare plus ’50s and ’60s rock music is absolutely amazing, and we always have so much fun with it.”

“The students have embraced the show with a dynamic energy. We are lucky to have such an amazing variety of talent here at YIS, and they take their roles seriously and apply themselves wholeheartedly to the production process,” says Meiklejohn proudly.

In preparing for the performances, which will take place at Yokohama International School’s Tanner Auditorium February 6, 7 and 8, the students are living the dream of many Star Trek fans. Dressed in the colorful threads of Kirk’s era, they’ll take up their posts on a recreation of the Starship Enterprise bridge. Replica props round out the 23rd-century landscape with communicators, phasers and tricoders. Not authentic enough for you? They’re experimenting with using projection and even simulating teleportation on stage.

Getting those transporters online will be key to a successful mission as the musicians have to arrive on set somehow. Return to the Forbidden Planet features dozens of songs, none of which are performed by Charles Napier (sorry fans of “The Way to Eden”). However, a live student rock band will be playing hits such as “Great Balls of Fire,” “Wipe Out,” “Shake, Rattle and Roll” and, of course, The Byrds’ country-infused psychedelic “Mr. Spaceman.”

Working together with Meiklejohn, who is directing, are choreographer Leanne Erickson, vocal director Sheryl Bridgewater and band director Peter Noonan. The grade-12 theatre class is also heavily involved in the production side.

“YIS has a strong connection with the Japanese arts community as well as local theatre ensembles, such as Yokohama Theatre Group,” explains Meiklejohn. “Many of our graduates have continued their study in musical theatre at universities in Europe or the USA and some have also entered the media industry.”

Don’t miss this chance to boldly go to D’Illyria with Captain Tempest and his crew. Set transporter coordinates for Yokohama and energize!