The spotlight’s on Japan’s fullback and coach Eddie Jones

Few things bring together a nation like sports—particularly when the national team finds success on the international stage. Soccer, figure skating, volleyball, and baseball have long been sources of pride for Japan, and now rugby has joined this list.

During the recent Rugby World Cup, Japan pulled off what many have described as the biggest upset in rugby union history by defeating South Africa 34-32. The success of the national team—which finds Japan ranked 10th in the world—has put fullback Ayumu Goromaru and head coach Eddie Jones in the international spotlight, and Metropolis caught up with both men to learn more about their amazing journey. 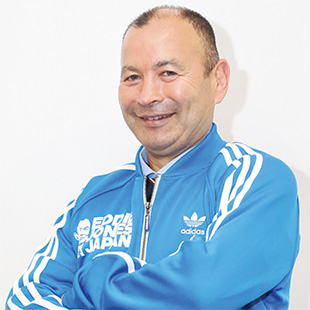 The win over South Africa was a watershed moment for Japan rugby. Asked if he agrees with those who peg it as the biggest upset in history, Jones says, “It has to be up there. It’s the first time a country outside the top 10 has beaten a country inside the top three. South Africa is one of the giants of world rugby, and Japan is one of the minnows; and in reality, Japan hadn’t won a World Cup game in 24 years. So to beat South Africa was a remarkable achievement.”

Goromaru played a huge role in the win, scoring 24 of Japan’s 34 points. Downplaying his own role in the win, the fullback explains, “There are lots of reasons for the victory. First of all, our head coach, Eddie Jones, spent four years encouraging the team despite the fact no one in the world knew anything about us. All our players followed his leadership and, for four years, sacrificed everything and worked harder than anyone else in the world. Every single person on the team over these four years was like a piece of a puzzle, and if you take even one of them away, we never could have achieved what we did.”

Putting together those pieces is the challenge behind all great sports teams, and to hold it all together requires dedication and vision on the part of both those who take to the field and those who prepare them. Japan found the right recipe when it brought together players like Goromaru and the coaching talent of Jones. The journey that brought them together is interesting.

The Road to Rugby

For Goromaru, rugby is something he was practically born to do. As is so often the case with those at the top of their field, his first experience with the game came early. “Since my parents both loved rugby, my two older brothers and I joined a rugby team in our neighborhood when I was three years old,” he recalls. “My objective was always to be like my two elder brothers, and I always learned new things from watching them play every day. My brother Ryo would then go on to enter a high school which is nationally renowned for its rugby team, and it was only natural for me to follow in his footsteps.”

Following high school, Goromaru and his brother went to different universities, where they became rivals and competed against one another for the national title. Along the way, this lifelong journey that passed through Waseda University also led Goromaru to the U19 Japan National Rugby Team, and ultimately to the national team as vice captain in 2012, when Jones became head coach.

Jones’ journey also cut a path through Japanese universities. The former Australian national team head coach, whose mother is Japanese, once helmed Tokai University’s program. “I’d helped out with Tokai University when they came to Australia,” he explains, “and basically, out of the blue, they came back and offered me a job as a full-time coach and university lecturer. It was a wonderful opportunity to go back to a country I obviously had a strong affinity [for], and also start a new career coaching.”

The road to Japan’s international top-ten ranking also included a Top League stop for Jones. In 2009, he took over the Suntory Sungoliath, a side very much in need of direction. As the coach recalls, “Suntory had been a team that had only won one trophy in nine years. They were a very orthodox, lazy team. So I just went in there and we developed the Suntory way of playing—which was different from everyone else—got the players really fit, and they believed in it. And we ended up winning three trophies in the next three years.”

That’s the kind of turnaround the Japanese national team needed, and taking note of his success, Japan named Jones their head coach in 2012. 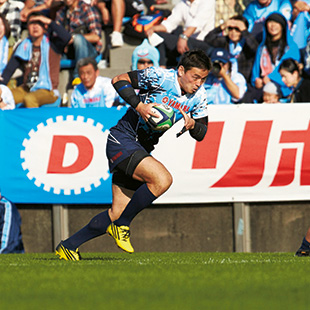 When we see someone enter the limelight—whether in sports, music, movies, or another field—we often think that they were in the right place at the right time, that there was a lucky break, that success was sudden. But is there really that one big moment that changes everything? “There was no big step,” says Jones. “It’s the culmination of all the processes that you put in place.”

Indeed, there are years of hard work behind anyone who suddenly springs to the forefront. Yet, something has to mark that moment when all the toiling leads to a breakthrough. For Japan rugby, that came in 2013.

“You always have one breakthrough win that really cements what you are doing,” explains Jones. And that was Wales in 2013. We beat not a full-strength Wales side, but we beat an understrength Wales side very well, very convincingly, and that just gave the players a lot more confidence. It reinforced their belief in what we were doing, and then we really took steps forward from there.”

Those steps included growing younger players, something Goromaru cites as a key to Japan’s success. “During my four years with the team, a lot of young players were given a chance to play—so I think that I could relate well to them from my own experience of making my debut. I was able to speak very positively with the younger players and encourage them to perform to their highest level. The players I supported would then support other young players who came through the ranks, and I was really excited about the prospect of an amazing Japanese team being formed.”

Another key to building a strong team is scheduling. Finding the right mix of opponents that challenge your players, encourage your players, and push them to the limit is important—and Jones has a proven philosophy. “I always work on the principle of a six-game rotation. Out of those six games, you want to play two teams you know you can beat, three teams that are about a 50-50 contest, and one team that’s immensely stronger than you. If you keep on playing those sort of structures, those sort of games, in a three-year period you start to end up winning one of those games where the opposition is better than you, and that’s how you improve your team.”

It’s hard to argue with the results of Jones’ blueprint: a win over South Africa, a top-10 ranking, and players who are confident that they can compete with anyone. But staying at that level is never easy. “Our players need to do their best to train hard every single day to make sure we do well,” stresses Goromaru.

Keeping the team fresh is also critical to maintaining success, and Jones explains that Japan needs to change “approximately 40 percent of the squad and bring some young players in. So identification of those young players at the end of this year and next year is so important. And it’s not only important to do, they gotta make sure they get the right players.”

This is all a must if Japan is to hold on to its number 10 ranking, and even move up. In June 2016, either Scotland or Ireland—both ranked in the top 10—will come over for two tiffs. And as Goromaru points out, the Tokyo-based Sunwolves—founded in 2015—will take part in SANZAR’s international Super Rugby competition next year as the representative from Japan, which will offer a chance to compete against the world’s top players. And, of course, in 2019, Japan will host the Rugby World Cup.

On an individual level, many challenges await Goromaru and Jones long before that World Cup rolls around. Goromaru has received an invitation to take his talents to Australia. “From February 2016, the next rugby season will start and it will be a challenge for me as I have the chance to compete abroad for the first time with the Queensland Reds. I really want to take on the challenge with pride as a Japanese player. I’m looking forward to it.”

And for Jones, the excitement of guiding another team to the next level is just getting started. He was named the new head coach of England’s national team in November.

With proven success, international respect, and all the building blocks in place, the future looks bright for Japan rugby.