The Hidden Faces of Kyoto

Arashiyama, in western Kyoto, is famous its beautiful scenery—notably the photogenic bamboo forest as well as a scattering of temples and cafés that are shrouded in seasonal colors. Most visitors happily stroll the streets in and around Arashiyama’s central landmark, Togetsukyo Bridge, resulting in a congestion of rickshaws, rental bikes, and hungry souvenir hunters. Yet, a mere 20-minute bike ride northwest of the city lies an area of Arashiyama rather unspoiled by tourism, withholding one of the most unique temples Kyoto has to offer. And though visitors may feel rather “templed-out” after trips to bucket-list destinations like Kiyomizudera and Kinkaku-ji, Otagi Nenbutsu-ji has a quirky side, appealing even to the most jaded of travelers. It’s also unlisted, evading most itineraries and guidebooks due to its forested location. 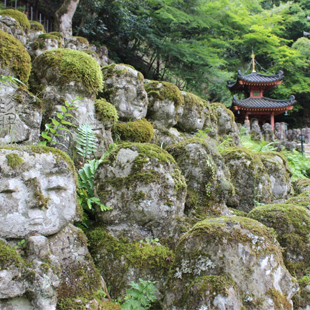 Located just up the beautiful Saga-Toriimoto, a well-preserved road lined with traditional townhouses, Otagi Nenbutsu-ji has a long history of destruction and renewal. It was first built in a different location in 766 by Emperor Shotoku, but washed away when the Kamo River flooded during the Heian Period (794-1192). Since that time, and a move to its current location, the temple has been destroyed by one disaster after another, including a civil-warfare fire and several typhoons. However, in 1955, the Buddhist monk and statue sculptor Kocho Nishimura became chief of the temple and began its current reconstruction.

As interesting—and tragic—as the history may be, the real incentive to visit Otagi Nenbutsu-ji is its 1,200 carved-stone statues that crowd the grounds. These statues are of Rakan, the disciples of Buddha, and are covered in bright-green moss and often deteriorating. 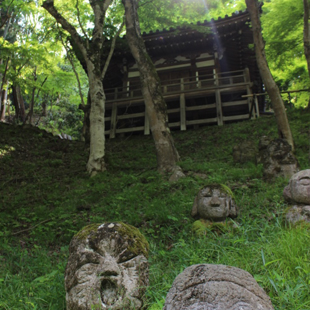 However, appearances can be deceiving: though they look as ancient as the temple itself, they were actually carved between 1981-1991 by worshippers from all over Japan, as a means to lend their support and prayers for the restoration of the temple. Nishimura himself even taught worshippers how to carve the statues, which resulted in a range of depictions of Rakan. They each have their own personality, from cheerful to downright disturbing. You’ll even see statues interacting with one another: hugging, sharing sake, or pregnant with alien-looking babies.

Examining the Rakan can be rather game-like. (You’ll even notice one playing a saxophone.) It’s also heartwarming to smile back at the often silly expressions that peer down on you from the hills. Thus, the temple is popularly known as “the temple of healing.” And although visiting Otagi Nenbutsu-ji may or may not lead to personal healing, it at least makes for a pleasant side trip into the woods.

Cafe hopping on the Saba Kaido