Contemporary art still has a lot of work to do in order to gain acceptance from the general public. This is the reason why the city’s main museum dedicated to it—the Museum of Contemporary Art, Tokyo—is usually the most peaceful and uncrowded. But if contemporary art is ever going to win a wider following, it’ll have to rely on talents like Gabriel Orozco, the major Mexican artist who is the subject of the museum’s latest solo show, “Gabriel Orozco: Inner Cycles.”

While there’s an element of intellectual sophistication to much of what Orozco does, he also has an excellent aesthetic sense and, even more importantly, a great sense of humor. Humor, of course, can make us forgive many things—even contemporary art! 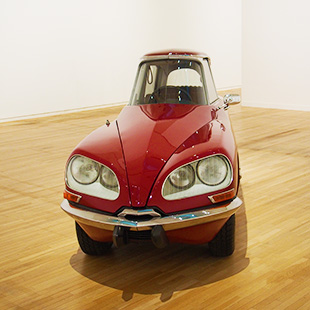 Orozco’s aesthetic sense infuses much of his work, but is most apparent in his “atomist” works. These are large color prints—up to 6 by 10 feet—showing photographic blow-ups of images clipped from the sports pages of the Times newspaper. Hard-edged, abstract patterns of circles and oval shapes—usually subdivided into halves or quarters of contrasting colors—are superimposed.

While the neatly arranged geometric designs partly obscure the action in scenes of soccer, cricket, rugby, or other sports, they also serve an analytical purpose, helping us realize the balance and composition of the image as well as the dynamic aspects. Reminiscent of the work of artists like Kazimir Malevich and Oskar Schlemmer, these “geometric interventions” also represent a synergy between figurative and abstract art.

But while this is the most artistically impressive part of the show, it’s Orozco’s humor that’s dominant throughout. This is clear from the photographic works with which the show opens. In these, he finds new ways of looking at ordinary things, such as the rear end of a horse, which at first looks like some new alien creature, or a ball in a puddle of water that looks like the moon because of the reflected sky.

With these photos, Orozco effortlessly manages to put an interesting spin on the familiar. In Waiting Chairs (1998), the lack of comfort of the chairs—as well as the length of the waiting periods—is hilariously emphasized by shooting them so as to emphasize the sweat and grease marks left on the wall behind and above the chairs. These are clearly too small for their intended purpose!

These subtle but deeply ironic and funny images then lead to the show’s centrepiece, La DS Cornaline (2013), which deals with the idea of form and function. This is a Citroën car cut in thirds lengthwise, then reassembled
with the middle piece missing. This effectively turns the vehicle into an unusable piece of junk, but in the process skilfully emphasizes the beauty of its lines and design.

But just in case you think he is being too highfalutin with this work, in the same room he also includes a self-deprecating afterthought—Noodle Fall (2014), which is just a used plastic instant noodle bowl stapled to the wall.

Museum of Contemporary Art, Tokyo. Until May 10.

A retrospective on Yoko Ono’s career

A quiet retreat in Kiyosumi-shirakawa