A taste of Britain in the Japanese capital

A champagne toast to kick off the afternoon in your glitziest finery is probably not the first thing that comes to the minds of British people when thinking of enjoying traditional, hearty, good-old fish and chips. For Brits, the dish is wrapped in nostalgic memories (and greaseproof paper) of visiting your gran’s house for “fish and chip Fridays;” of pay-day takeout treats on the way home from work late at night, or of scoffing with greasy fingers at the seaside promenade — one eye on your battered fish and one on the ominous seagulls loitering nearby.

For all the friends of Malins Fish and Chips this toast (at the swanky R2 Supperclub), however, was an important gesture to celebrate the restaurant’s latest milestone: five years of proudly serving this British classic to the people of Tokyo. Originally starting out as a three-man team, with Ryuhei Takizawa as the head, the company’s first restaurant opened in Roppongi. Since then, it has branched out to other locations across the city, invested in food trucks, and even set up its fryers at a spot in Paris. 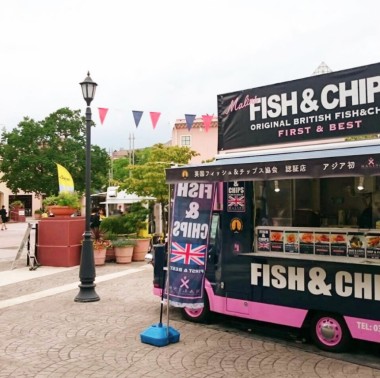 All along this journey, the company’s philosophy has remained the same: to introduce Japan to the most authentic British fish and chips and to use only the finest ingredients — the fish is responsibly sourced from Toyosu and the potatoes are grown in Hokkaido. To provide this level of authenticity, the batter is made using a secret recipe and the UK staff have trained with the National Federation of Fish Fryers (a trade association established way back in 1913).

The result is those chunky, golden, fluffy-on-the-inside chips, the crunch of crisp batter revealing the juicy white flakes of fish inside and that tang of malt vinegar as we eat that first bite. In this sense, the 5th anniversary was more than a celebration of a company, it was a chance to eat your way back through memories of this national dish. Even the malt vinegar is imported from the UK, and the menu also features other chip shop classics, including battered sausage, mushy peas, tartar sauce and gravy. 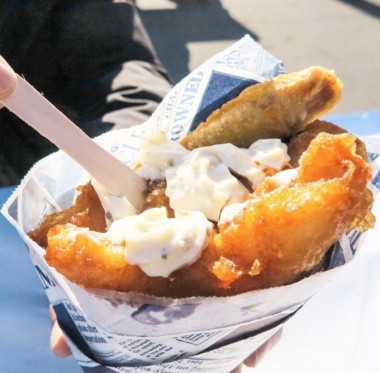 Whether you’re a Brit who can relate to these memories or not, Malins says that everything, apart from its location, is authentic, so everyone can enjoy a taste of Blighty in the Japanese capital. Sure, the presentation might be more delicately arranged than the all-in-one heap spilling out of a disposable styrofoam container that British people find most typical (instead, the eat-in option at Malins is neatly arranged on separate plates), but can you really complain when these entrepreneurs have worked so hard to make a British dish fit alongside Japanese tastes?

Whatever your opinion of how fish and chips should be served or eaten, the event highlighted the extent of Malins’ achievements, and showed how food, no matter where it’s from, can bring people together.