Yoshihiro Narisawa’s eponymous and “innovative Satoyama restaurant” has just celebrated its 15th anniversary. Coinciding with the celebratory occasion, Chef Narisawa became the first Japanese chef to be awarded the Grand Prix de l’Art de la Cuisine (Grand Prize of Culinary Arts) by the International Academy of Gastronomy. Narisawa has been honored with many other awards including the Best Restaurant in Asia and is widely acknowledged as one of Japan’s most original chefs. He is a true visionary and a meal at Narisawa is like a travelogue connecting diners to Japan’s nature or, more concisely, to the concept of Satoyama, the border zone between mountain foothills and arable flat land.

At the award ceremony Narisawa, ever so humble, said that “99% of the chef’s job is sourcing the right ingredients and 1% is the work in the kitchen”. He encourages young chefs to “get out of the kitchen on their days off, head to the mountains and oceans to learn from those who are close to nature.”

While he exalted purveyors who provide ingredients from Hokkaido to Okinawa, the suppliers were in return glorifying Narisawa. Tadashi Inamoto, whose forest is in Takayama, said on a walk through the woods with Narisawa that he was surprised when the “chef reached up to a branch and picked a flower and ate it”, something the landowner never would have considered. Narisawa commented that “the young bud spoke to me” and here we observe his intimate relationship to nature.

Yoshiki Tsuji, the president of his alma mater, Tsuji Culinary Institute, said that “beyond Narisawa’s culinary training he has a keen sense of taste, a special sense of smell and vision that allows him to poetically interpret the agriculture into delicious cuisine.”

A meal at Narisawa expresses the Japanese landscape. Satoyama, the forests and seas of Japan, is the theme for “Innovative Satoyama Cuisine.” The meal begins with the mossy landscape of the forest floor emulated with charred leeks, okara (tofu lees) and fried burdock root. There are many signature pieces to the meal, including chestnut bread, which is cooked on the table and served with moss butter.

Narisawa laments that many of us are “losing touch with the mountains, forests and oceans” and encourages us to return to nature and to think about the future. For example, if chefs are buying seafood or produce only from the markets they can not see how things are changing in the field. By visiting the farms and fishing ports they can “speak directly to those harvesting the food and then select safe and sustainable products.”

Narisawa finds inspiration in the environment, for example observing the “smell, sound and texture of the wind and waves and how the aroma of the wind changes throughout the year.” The signature soil soup, in his repertoire since 2001, is simply made from soil, burdock root and water, creating a flavor that changes as the seasons change. A true reflection of the earth.

Naturally he is a strong supporter of environmental issues and sustainability so it’s of no surprise that his restaurant was the first winner of the Sustainable Restaurant Award from the World’s 50 Best Restaurants back in 2013. Fallen trees are repurposed as sustenance and he only orders what is used for the dishes so there is minimal food waste. 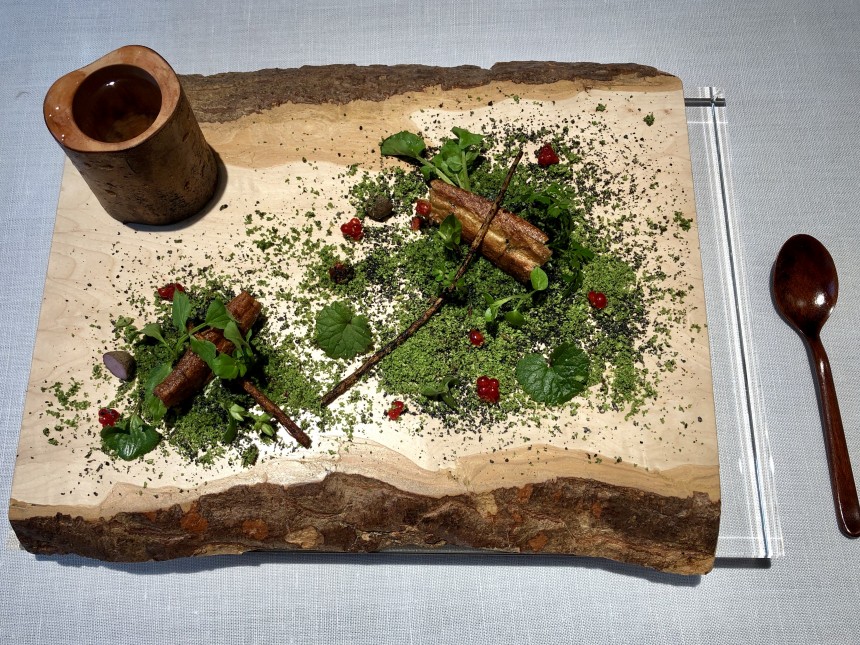 The sommelier does an outstanding job of pairing wine and sake with the meal. Some of the wines are Japanese, a nice treat as these are not typically found at such conceptual restaurants. Sake pairings can also be included upon request and may include unique pours.

The room is crisp and white with large floor-to-ceiling glass walls enclosing the kitchen. Attentive staff ensure smooth service and they are knowledgeable enough to answer questions about the cuisine and ingredients – in English or Japanese.

The indefatigable Narisawa is involved with many projects supporting sustainability and education. He also consults on various culinary projects supporting local cuisine, including creating a bento for the Aru Ressha train in Kyushu featuring seasonal Kyushu ingredients.

The satoyama concept is continued at Bees Bar by Narisawa just down the street from his namesake restaurant. The cocktail bar is designed to give the feeling of being in the forest. Non-alcoholic drinks and cold-pressed juices round out the drink list. The menu ranges from seasonal crudités (traditional French appetizers) and seafood curry to charcoal-grilled dry-aged wagyu.

Narisawa’s philosophy and respect for ingredients is almost religious. A reverential meal that introduces diners to the glorious bounty of the foods of Japan.