“This is Japanese hip-hop,” NENE declares over the audience at Tokyo’s Club Asia last December. Dressed in a sheer slip dress, with tattoos sketched from her fingertips to her forehead, her image is as gutsy as her stage presence, and the energy she hands to the audience is infectious.

Launching into the first bar of “Ying Yang,” the 27-year-old rapper is joined on stage by the second half of the Yurufurwa Gang duo, Ryugo Ishida. A partner in all senses of the word, “Ying Yang’s” lyrics go on to explore the intoxicating balance of life in Tokyo, but the song’s name is also a testament to the pair’s sharp musical chemistry. “We’re like a mirror,” NENE laughs in an interview with Metropolis. “His presence helps balance our life—literally yin and yang. Our mission is to make that circle as round as possible. When we started, there was a time we were so broke we only had some cocaine in our pockets, but now we are healthy and making a living together by music.”

Though the duo formed in 2016 after they met at the hip-hop event Blue Magic, both members were already building as creatives in their own right. NENE even went on to reach the international spotlight as a solo artist when she was featured in The Chemical Brothers’ track “Eve of Destruction” in 2019. Still, it has always been Yurufuwa Gang that holds a special place in her heart— the matching hiragana “yurufuwa” tattoos they inked on each other being a pretty punching symbol of this.

“I’ve always been fascinated by things on the fringes and the strange.”

Looking at where the duo’s sound sits in Japan’s scene, their inspirations splash into pools of chill-hop, candyish 90s pop and psych rap, with everything from bands like Supercar, Buffalo Daughter or MGMT to legends like Denki Groove, Gorillaz and Nirvana dropping into the mix. Though they brush shoulders with Japanese hip-hop heavyweights like CHINZA DOPENESS or KID FRESINO, their priority has always been fostering their own originality rather than aiming to be at the top of the industry. “I’m always curious to see how far and bold we can go with our style and see how many of our fans would support us,” says NENE. “I will never bend my style for something or someone else.”

“Part of me wants to be a guide to that strange world through music, to be that strange vibe in sound. I aim to bring it out of the shadows, into mainstream pop culture; make everyone see it.”

“There are lots of weird people around me in this city. They look like yokai to me sometimes. Maybe my music is a metaphor for them,” she laughs. “It’s indescribable in words but you know that feeling, right? Look at the strangeness of Shinjuku’s Kabukicho culture, for example. It’s neon, always shiny, artificial and mysterious. Your head is saying that you’d better stay out of it but your curiosity pulls you in. Part of me wants to be a guide to that strange world through music, to be that strange vibe in sound. I aim to bring it out of the shadows, into mainstream pop culture; make everyone see it.

“People in Tokyo are like lucky bags,” she continues. “You don’t know what you get until you open the bag. A salaryman might look like everyone else on the train until he suddenly lashes out at someone. Wouldn’t it be a less scary world if genuinely scary people were to all look obviously scary?” 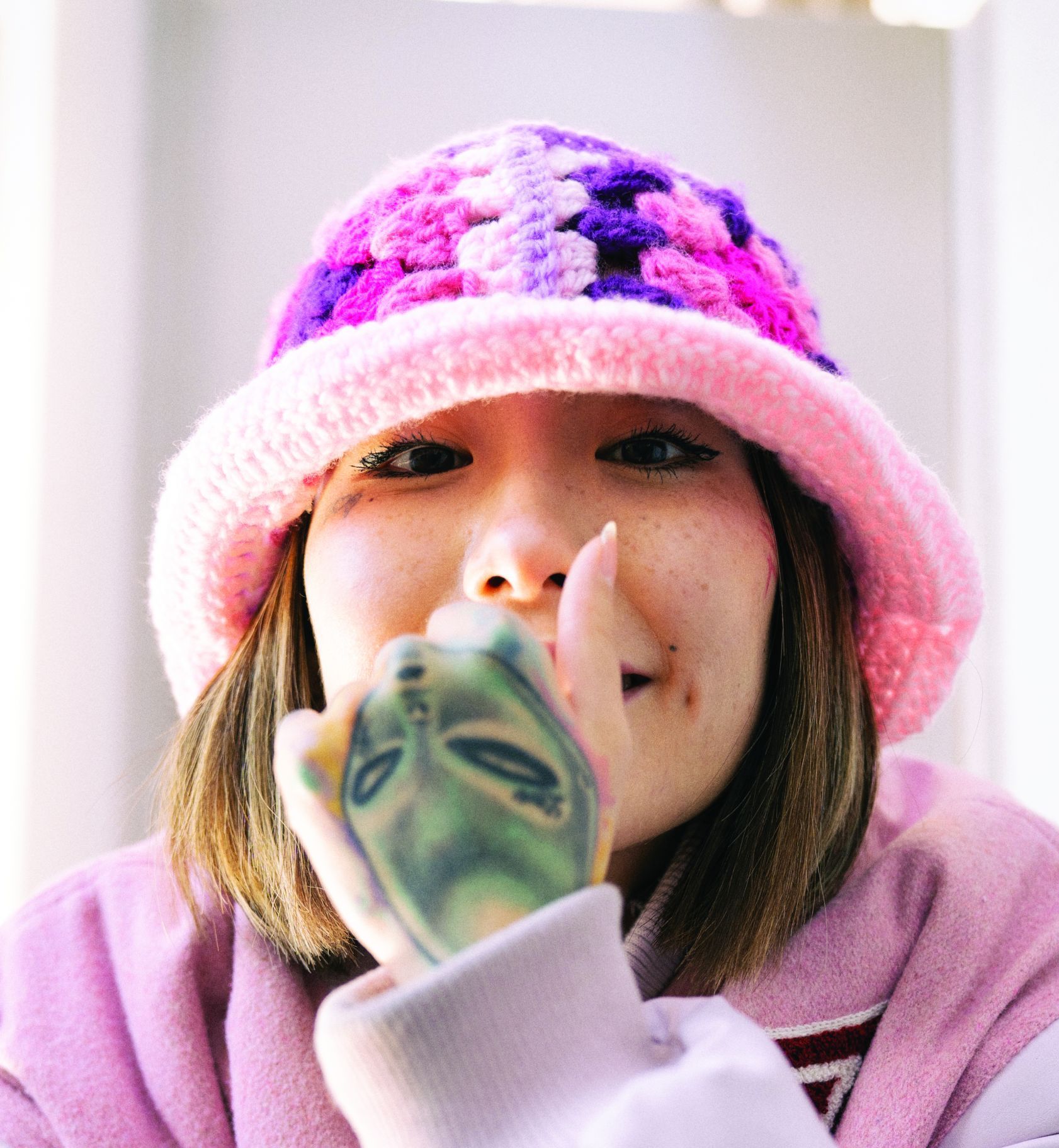 “Sometimes I do hole up in my room, not coming out or meeting anyone,” she continues. “On the stage, I’m just like everyone else. I’m a slave to my own emotions, so I write my lyrics to help this weaker self.” Her situation is certainly relatable, as is the way that the right song can have an empowering effect on us. It’s perhaps why Yurufurwa Gang’s sound has changed so much over the past few albums. The rap, like a muscling pitbull playing with a ball, toys towards more tangible societal politics rather than vaguer hooks about “sex, weed and money” that featured so prominently in the laid-back 2018 album Mars Ice House II.

“Yurufuwa Gang is not our own thing anymore. It’s our fans’ too,” says NENE. So coax your inner weirdness out of the shadows. Embrace it even. You might as well—like the Teletubbies on NENE’s skin, it’s not going anywhere.