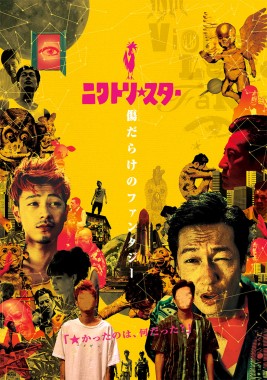 Niwatori Star, a crazy mishmash of a feature film, is everything you would expect from hip hop musician “Wolf” Kanata. He has made music and promotional videos in the past, but his first feature film is as surreal, anarchic, brutal, rebellious and weird as you could imagine. Yet, it pulls off the feat of being both searingly realistic and completely fantastical.

Somewhat reminiscent of Sogo Ishii’s work in the 70s, you know Niwatori Star is going to be an over-the-top piece when the first image is a baby sucking on a women’s breast intercut with a woman performing oral sex (censored). The work mixes animation, live action, photography and drawings/paintings with digital video, 16mm film and colored frames. In addition to everything else you can think of. The drama veers from the mundane to the bizarre, with sitcom tropes and laugh tracks, picturesque childhood flashbacks, dream sequences, multiple hellish scenarios that include anal rape and murder, and lots of drug consumption.

The main character is the blond-haired, long-necked and tattooed “Niwatori star” (chicken star) Rakuto (Ryo Narita). The twenty-something, who somehow really does resemble a chicken, is transplanted into Tokyo from Okinawa. His buddy and roommate Sota (Arata Iura), who is slightly older and sells weed to support them, narrates the pic. He’s from Osaka and frequently mixes Kansai dialect into the narration. They live in a dilapidated apartment building run by a nymphomaniac landlady (Lilico) who demands sex from her younger tenants. They work at a punk bar on the first floor called FUS (Fuck You Sunshine) and the environment is populated by throwaway characters like the half-Thai, half-Jamaican Muki, who just smokes weed and plays guitar terribly. The more important character is Tsukimi (Sara Mary), a single-mom meth head who is trying to kick the habit. The film implies Rakuto is the father. The two protagonists roam aimlessly and sloppily rebel against Japan (there’s a great scene where Rakuto calls out the cops for stopping him randomly). The action intensifies when Jay (Peron Yasu) turns up to smoke weed with the pair. The wannabe rapper dresses like an LA gangster and works for the yakuza. His murder by the yakuza is a warning sign to Rakuto and Sota that they can’t maintain their careless, drug-fuelled lifestyle. Will Rakuto take responsibility for his child? And can he avoid the yakuza?

Unique, bizarre and sometimes horrifying, this aggressive piece is a cry from an underground scene that can’t decide how and why to rebel and is dogged by brutal organized crime.