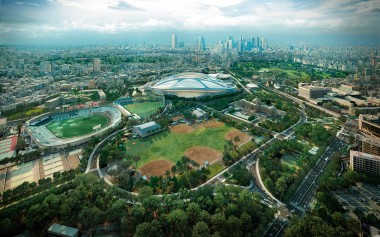 Zaha Hadid is among the unquestioned superstars of world architecture. She’s additionally significant as one of the few women to break the so-called glass ceiling of this male-dominated profession. That she is also Iraqi only adds to her cosmopolitan crossover appeal, making her the perfect name to associate with big, inclusive international projects—such as the stadium design for the Tokyo 2020 Olympics.

The eponymous exhibition at Tokyo Opera City Art Gallery aims to give Tokyoites an insight into her aesthetic. This is more than a mere curiosity: serious concerns have been voiced about her design for the Tokyo Olympic Stadium and its impact on the showcase event to the extent that last year, a group of Japan’s top architects, including Fumihiko Maki, Toyo Ito and Sou Fujimoto, formed to oppose Hadid’s design: Speeches were made and petitions signed.

The main criticisms have been that the stadium, which will occupy the current site of the 1964 National Olympic Stadium, will be too big, expensive and unsustainable. To accommodate these criticisms, the stadium will now be scaled down.

But critics also say Hadid’s works, with their sleek, futuristic lines, are designed to stand out in an overly attention-seeking manner that causes aesthetic disharmony and degrades the visual environment. That might sound odd as this is Tokyo—home of the architecturally absurd non sequitur.

The exhibition at Tokyo Opera City Art Gallery gives Hadid an opportunity to answer her critics, and should also be seen as an important PR exercise, with the architect presenting her oeuvre in a way that may mollify her critics.

The first half of the exhibition could even elicit some sympathy and white-knighting, because it focuses on her “unbuilt works,” using models, artworks and designs. Poor little Zaha, it seems, had to plough a long, lonely furrow before one of her designs was finally constructed, giving her the nickname, “The Queen of the Unbuilt.”

Working first in the office of Dutch architect Rem Koolhaas, Hadid set up her own architectural practice in 1980. But despite doing well in competitions, she had to wait more than 10 years to see her first built work, the Vitra Fire Station in Germany (1993), whose dramatic angular shape seems to wail like a fire engine siren.

Advances in construction technology and 3-D computer analysis helped her achieve her trademark flowing, curvilinear designs that many have interpreted as a more “feminine” style; sometimes over-literally so—her recent design for the Al-Wakrah Stadium in Qatar was famously compared to female genitalia.

Visitors can judge for themselves, with installations showing some of her best-known works and a section focusing on the Olympic Stadium, the climax—no pun intended—of her long career.

Watch the Winter Olympics in Tokyo

Get into the Olympic spirit at “Tokyo 2020 Live-Site in 2018”, with live broadcasts, stage performances and even chances to try out some Olympic sports.