A guide to the stars of the Yaeyama Islands, Okinawa

Bright lights, big city peeps tend to forget that there are stars—a septillion or so, scientists estimate—directly above us every night. The naked human eye can only perceive about 2,500 at any given time, but city lights occlude nearly all of them. Luckily, the Yaeyama archipelago (including the Ishigaki, Iriomote, and Taketomi islands, among others) in the southwest of Okinawa Prefecture has a velvety dark sky, and island tour guides have begun to focus on both preserving and monetizing this natural resource. So Yaeyama tourism is, literally and figuratively, looking up.

Japan’s southernmost national park, Iriomote-Ishigaki National Park, has achieved provisional acceptance as an International Dark Sky Park, the first such designation in Japan, and the second in Asia. Dark skies provide an environment for plants and creatures dependent on nocturnal circumstances, such as sea turtles, owls, frogs and endemic fireflies, and make astro-tourism—an educational, low-impact source of revenue with minimal, um, overhead—possible.

On Ishigaki island, Hiroshi and Keiko Tomori, co-owners of Utakuna Ishigaki Island, run star-gazing tours. The couple’s marriage was clearly in the stars, since they first got to know each other at the Ishigaki Astronomical Observatory. 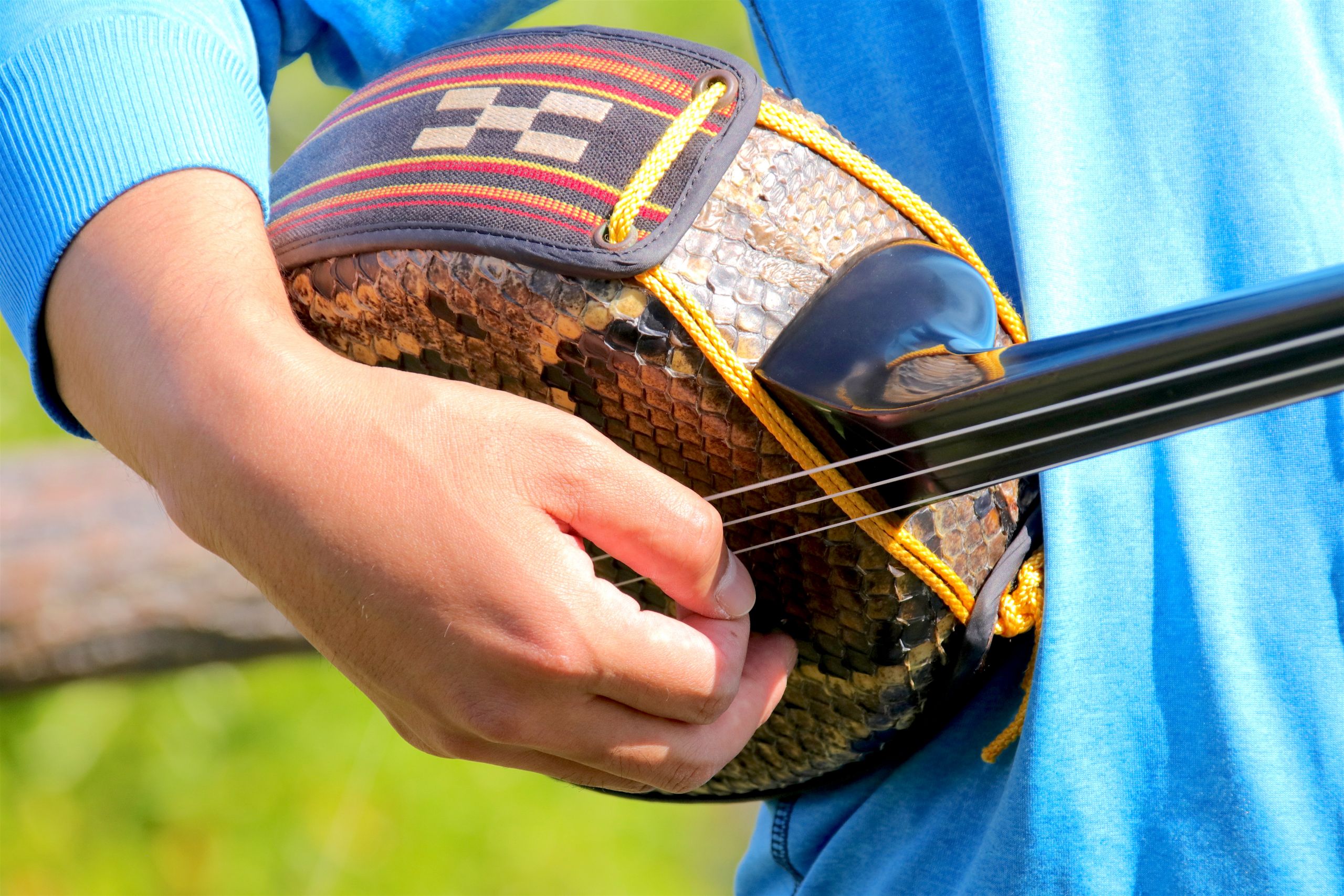 Keiko and Hiroshi will drive you to a remote, peaceful spot on the island, and point out constellations. With the sounds of frogs and owls in the background, Hiroshi, an award-winning sanshin (snakeskin-covered precursor to the shamisen) artist, will serenade you with the gentle flow of traditional island songs.

For tourists who would prefer slightly more conventional surroundings, plus use of a telescope, and, as Keiko is quick to add, “a nearby toilet,” Utakuna also offers a Syani-Syani star-gazing tour. Syani-syani (which means “exciting” in local dialect) tours are held on the rooftop of Ishigakijima Beach Hotel Sunshine. 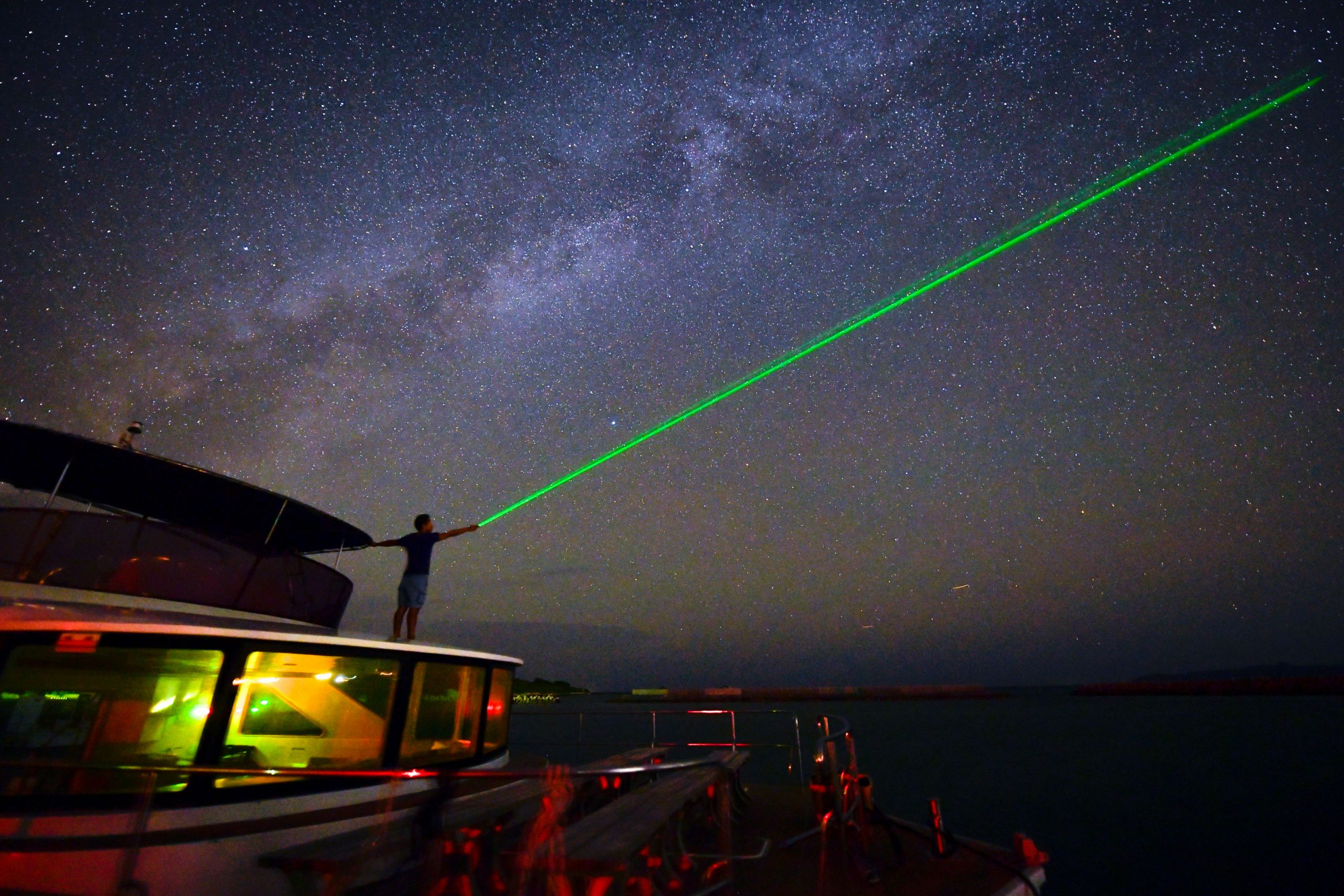 The Pushynushima (Okinawan for “star island”) launches at Ishigaki Port and navigates with a sleek two-story catamaran for star-gazing in Okinawa at night. Photo credit: Pushynushima

For the sea-worthy, a separate outfit runs starlit boat cruises. The Tingara Cruise, named after the Okinawan word for “Milky Way,” launches at Ishigaki Port, and is conducted by Pushynushima Ishigaki. Pushynushima (Okinawan for “star island”) navigates with a sleek two-story catamaran. Guests can grab a free drink and settle in at a table to enjoy the sea breeze as the boat putters away from the port harbor. Guides use laser pointers to connect up the constellations and planets, and while the night skies are somewhat impacted by port lighting, the lull of waves and salty air are the tradeoffs.

If you want to further your star search on Ishigaki, you could check out the Ishigakijima Astronomical Observatory or the VERA Ishigakijima Observatory. It’s a good idea to call first to confirm event schedules and opening hours, which vary frequently.

For night skies several shades inkier, grab one of the frequent ferries from Ishigaki to Iriomote, the largest of the Yaeyama Islands. In less than an hour, you’ll be exploring what are predominantly protected parklands. Iriomote’s permanent population of about 2,000 occupies only 10% of the land, and the rest is covered in dense mangroves and subtropical rainforest. 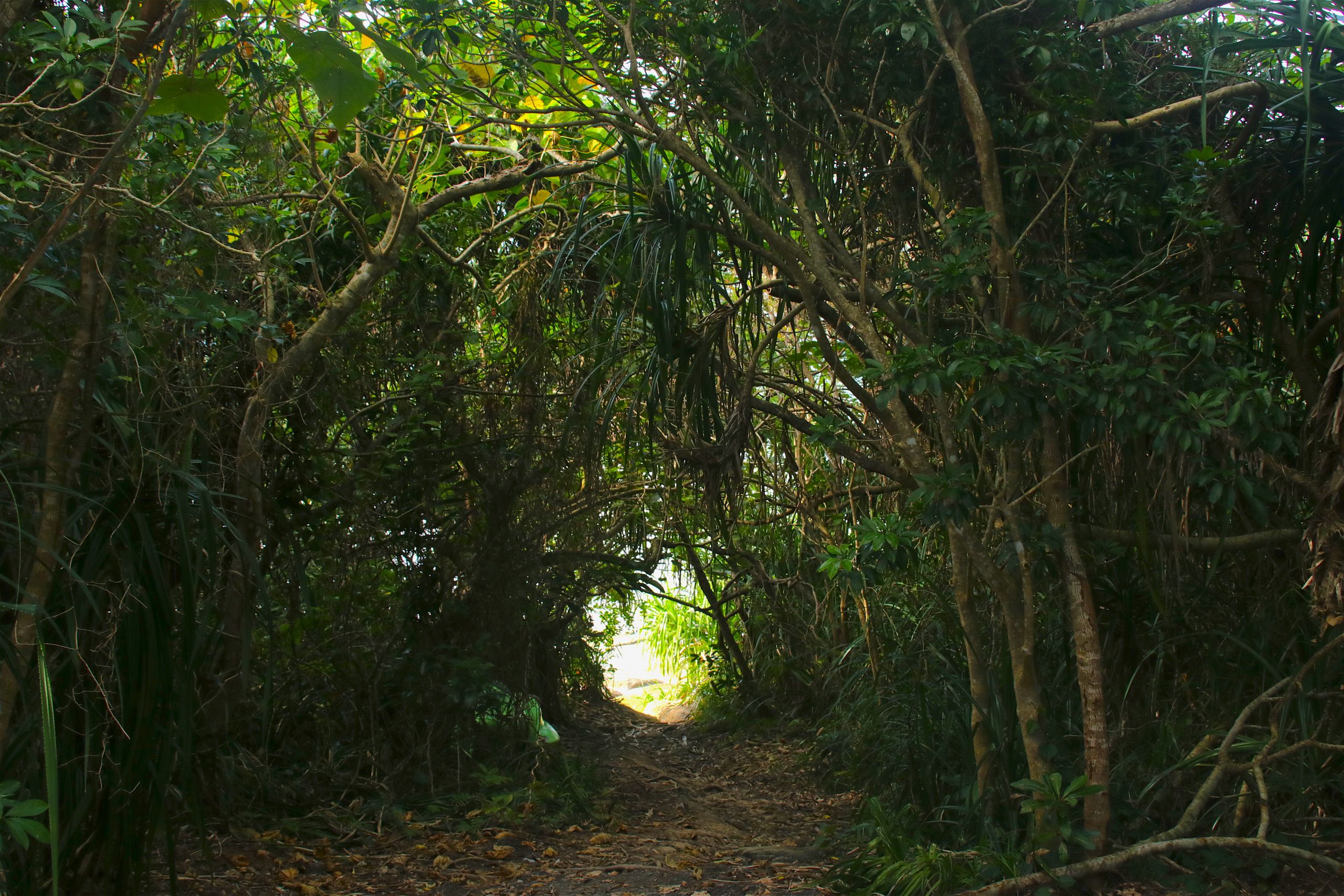 In addition to star-gazing, 90% of Iriomote is covered in dense mangroves and subtropical rainforest. Photo credit: Kit Nagamura

Accommodation is limited on the island, so if star-gazing in Okinawa is your goal, it’s best to book a place to stay in advance. Takemori Ryokan, a modest seven-room place located near mangroves, has basic tatami rooms, but the dinner served by the owner-family is a home-cooking worthy of the stars.

Tappei Motchizuki, a licensed nature guide and head of Motti Trekking Eco Tour, will drive you to his pocketful of semi-secret star-gazing places. You could drop cell phone pins, but a little mystery never hurts, and Mochizuki warns that it takes a lot of time for your eyes to adjust to the dark, and your phone will delay that process.

On Iriomote, the night scenery is backed with a chorus of marimba-like frog songs and dotted with fireflies. When Mochizuki slaps out camp chairs near a sugarcane field, you can lean back and enjoy the jaw-dropping sky theater, and learn about some of Iriomote’s and Japan’s legends involving constellations. 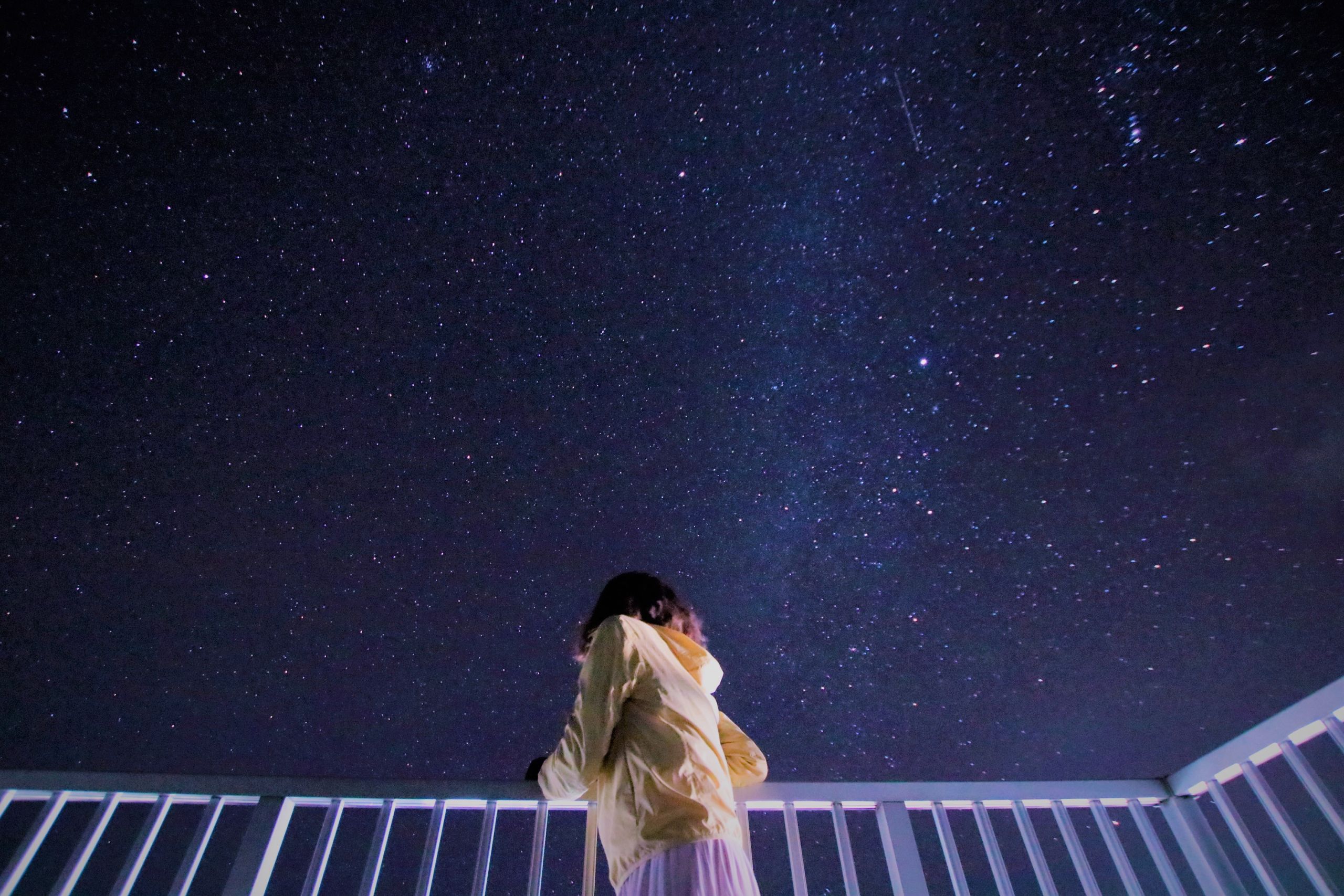 For those who are early birds, Haruhiko Kamijo of Harubaru can also be booked for sunrise star-gazing tours. Kamijo points out night-blooming flowers, such as the dramatic, vanilla-and honey-scented sagaribana (hanging Barringtonia racemosa), and sets out camp chairs for your morning star-gazing. He also offers canoe and kayak tours worth checking out.

WHAT ABOUT THE WEATHER?

The fuller the moon, the dimmer the stars, and typhoon clouds can change things too. If your skies are not ideal, try some other star-themed options. Head to one of Yaeyama’s hoshizuna (star sand) beaches, dotted with star-shaped sand grains that are actually the shells of tiny single-celled critters, or Foraminifera amoeboid protists. While you’re on the beach, you might spot some “celestial bodies” bathing, but if all else fails, for heaven’s sake, kick back with a crisp, light-bodied Orion Beer, an Okinawan brew named after the eponymous star constellation. 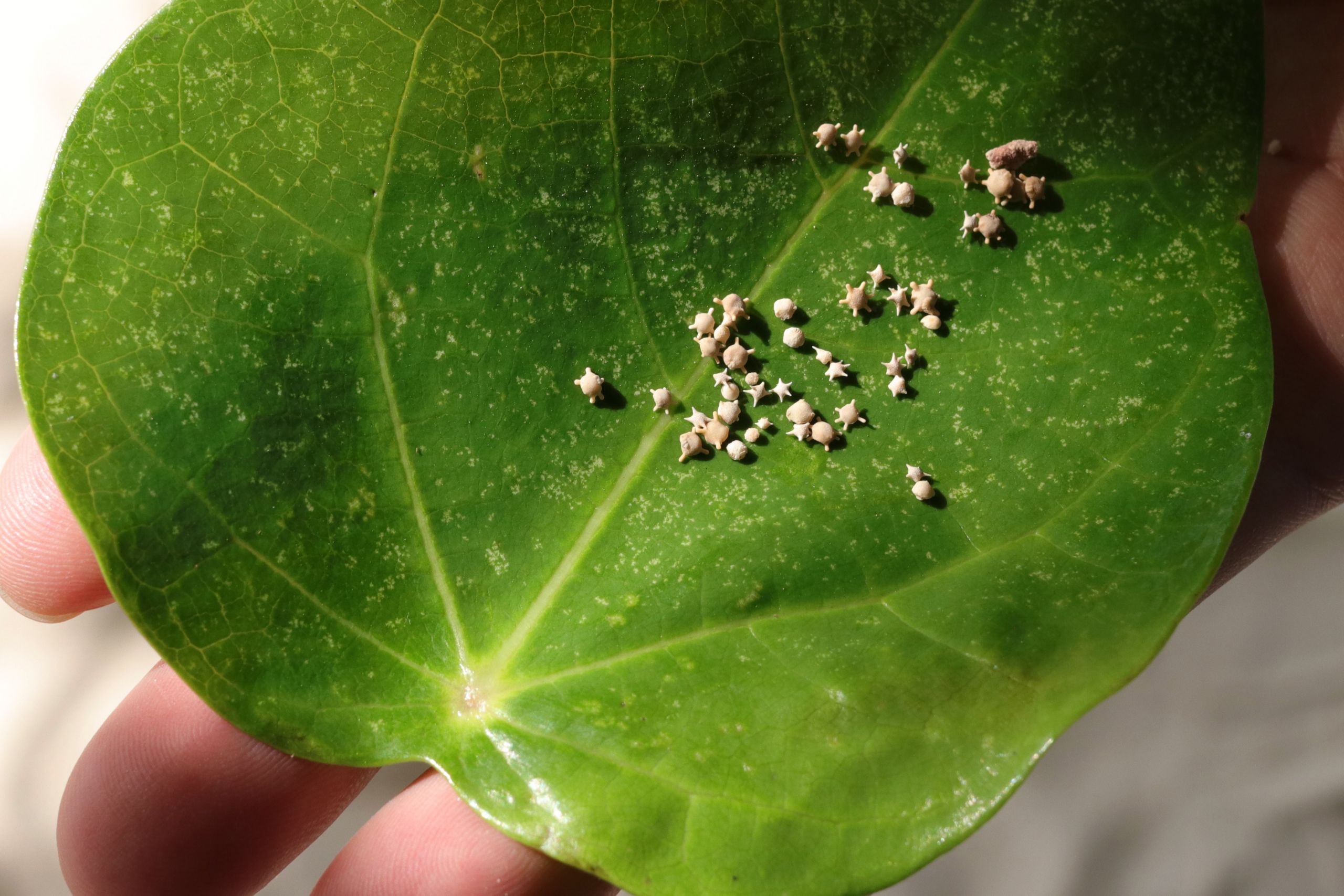 If the weather isn’t in your favor and star-gazing in Okinawa isn’t possible, visit one of Yaeyama’s hoshizuna (star sand) beaches. Photo credit: Kit Nagamura

Kit Pancoast Nagamura graduated from Brown University, and first visited Japan on a Samuel T. Arnold fellowship offered through the generosity of IBM’s Thomas J. Watson, Jr. She later took a Master’s at the University of Michigan, where she won a Major Hopwood Award for fiction, then received a Ph.D. with honors from the University of Wisconsin. In Tokyo, she is a widely recognized photographer, writer, and haiku poet. Her work has appeared multiple times in Departures Magazine, SilverKris, JAL’s Skyward inflight magazine, the Japan Times and on NHK World’s international programming.