Beyond pop-culture fame, this suburban neighborhood is a symbol of Japan’s postwar idealism

Sakurashinmachi is a section of the city that lives half in pop-culture fame, half in scenes of everyday suburban life. It’s an understated stop along the Tokyu Den-en-toshi Line in Setagaya Ward, a neighborhood that — with its appealing name and connection to the long-running Sazae–san manga series — offers visitors more than just cherry blossoms in springtime.

Routines and day-to-day scenes play out here, a catharsis for any notion that the capital is a rush of people, neon lights and drunken businessmen — rather, Tokyo is a patchwork of towns and villages stitched together in some kind of city formation.

The bus out to this part of Tokyo’s suburbs rolls gently through busy backstreets, laden down with smart school children who alight like ducklings in their Catholic school uniforms and sit quietly alongside older residents. Routines and day-to-day scenes play out here, a catharsis for any notion that the capital is a rush of people, neon lights and drunken businessmen — rather, Tokyo is a patchwork of towns and villages stitched together in some kind of city formation. 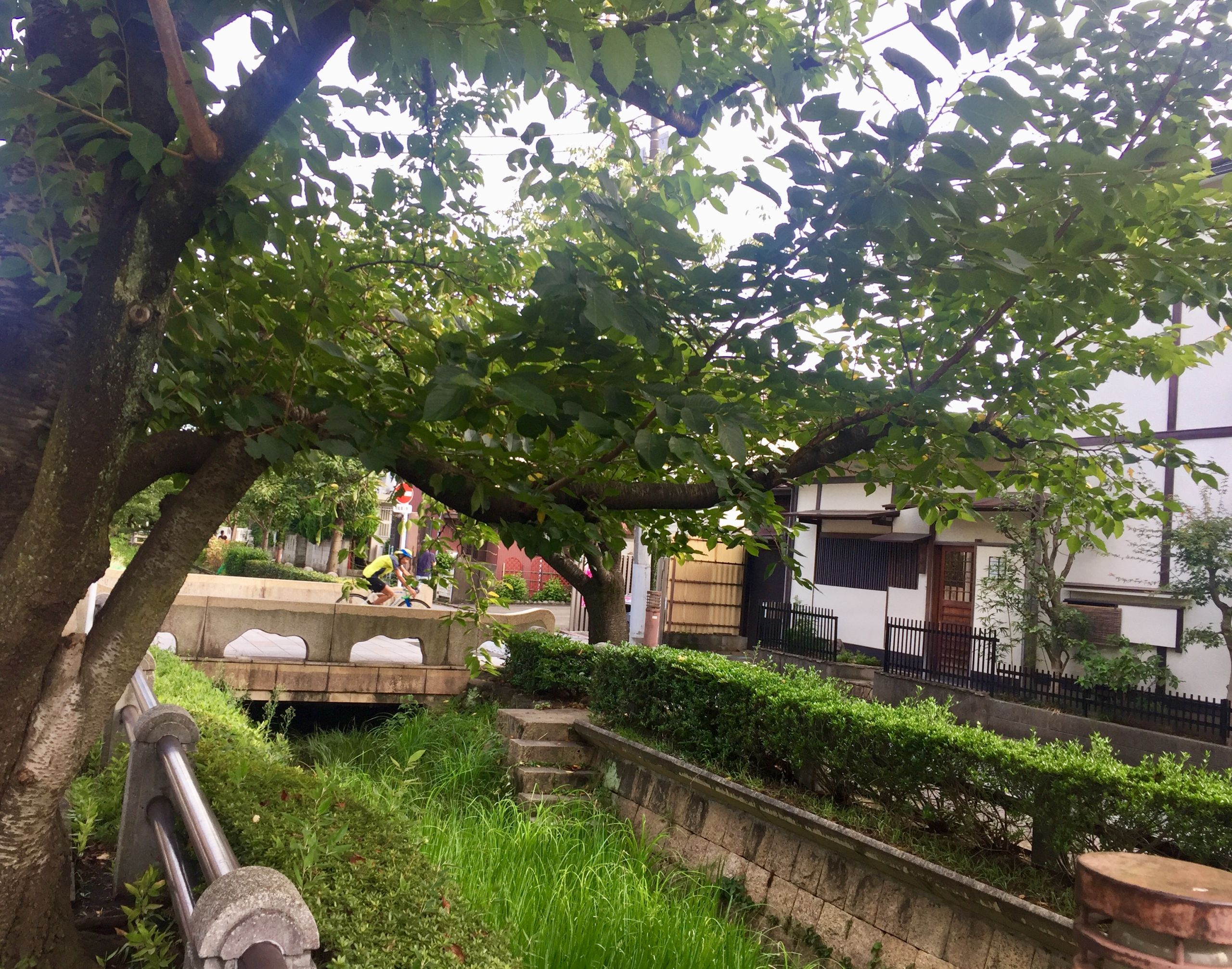 Appealing to the well-to-do with its modern facilities, clean air and transport connections, the rich and famous quickly bought into this new way of living. The desirable district was dubbed “The Karuizawa of Tokyo” — referencing the affluent weekend vacation spot — and from 1913 onwards, wealthy Tokyoites snapped up houses in this new, trendy part of town. It was around this time that 1,000 cherry trees were planted along the streets under the concept of creating a Garden City: an idealized urban area which balanced out city life with a taste of the countryside. “Sakura” wasn’t officially added to the town’s name until the 1960s.

Modern day Sakurashinmachi still plays the part of being an amiable suburban town, although much has changed since the glamor of a century before. Life here revolves around the train station, the parade of nearby local shops and Sazae-san Street. The Sazae-san identity anchors Sakurashinmachi’s spirit of today. Around the station area and along the streets, playful statues and fun artworks depicting familiar Sazae-san characters welcome passersby. Even the local bank is thematically decorated.

It was here that creator of the 1946 manga series, Machiko Hasegawa, once lived. Although the manga, which deals with postwar Japan’s social issues, ended in 1974, the anime adaptation lives on today, making record-breaking history as the world’s longest-running animated television series. Now, steeped in nostalgia, Sazae-san and her family are very much a staple of Japanese culture.

Sazae-san Street runs downhill directly across from the Sakurashinmachi Station. The sloping road is home to numerous shops dedicated to the manga creator and her stories. One such, Fujiya Bakery, sells a selection of freshly baked goods stamped with Sazae-san characters; people stop by to snap pictures of sweet desserts and sample them in the old-fashioned atmosphere. 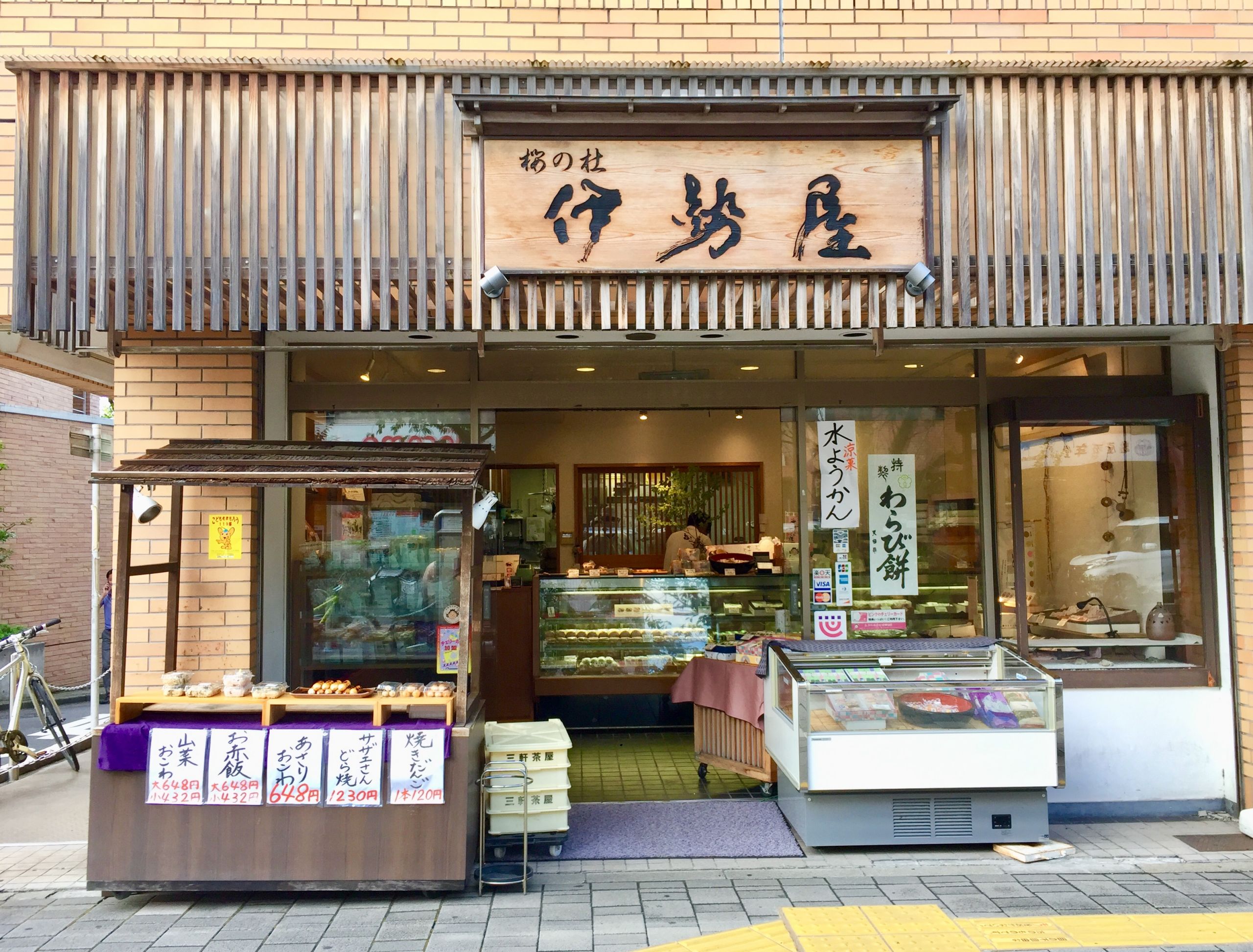 Further down, at the bottom of the hill is the Hasegawa Machiko Art Museum. Edged by a tidy lawn, the modern brick building is easily identified by the statues of the Sazae-san family — a prime selfie spot. Inside, the museum displays a permanent collection of around 800 pieces of Hasegawa’s artwork alongside other related items, which were donated by Hasegawa and her family. Hasegawa was a keen collector of artwork: much of her life’s collection, from Japanese and Western-style paintings to ceramics and sculptures, are also on display at the museum. 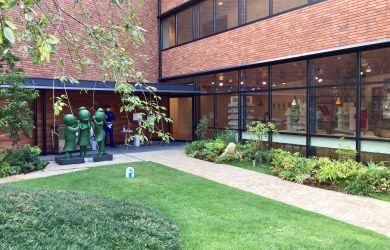 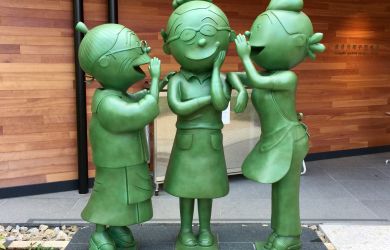 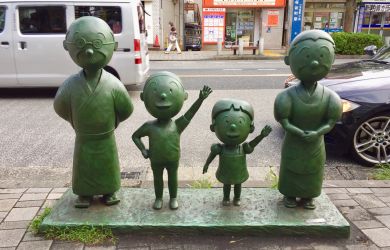 Sazae-san character statues can be found dotted around the streets of Sakurashinmachi. 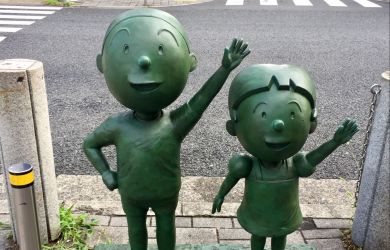 Back out onto Sazae-san Street and into the low-key hum of life, it’s hard to see remnants of the original Garden City development. Much of it was disturbed by the building of a main road that has spliced the area in two, but some of the feeling of old Shinmachi remains along the Nomigawa Water Park. This laid-back green space is not really a waterpark, more of a stream with pathways and bridges. Here, 300 of the original 1,000 cherry trees still remain, fringing either side of the waterway. This seasonal landscape — overflowing with lucious greens in the summer, burnt oranges in autumn and vivacious cherry blossoms in spring — was selected as one of the “100 Views of Setagaya.” In peak bloom, the lines of trees create tunnels of blossom over the water.

From the waterway, the march of local life moves in formation uphill towards the train station. It’s near here that Sakura Jingu is situated. Offering a space to reflect, the shrine is the head of Shinshu-kyo, an independent Shinto sect, and holds some interesting ceremonies throughout the year. 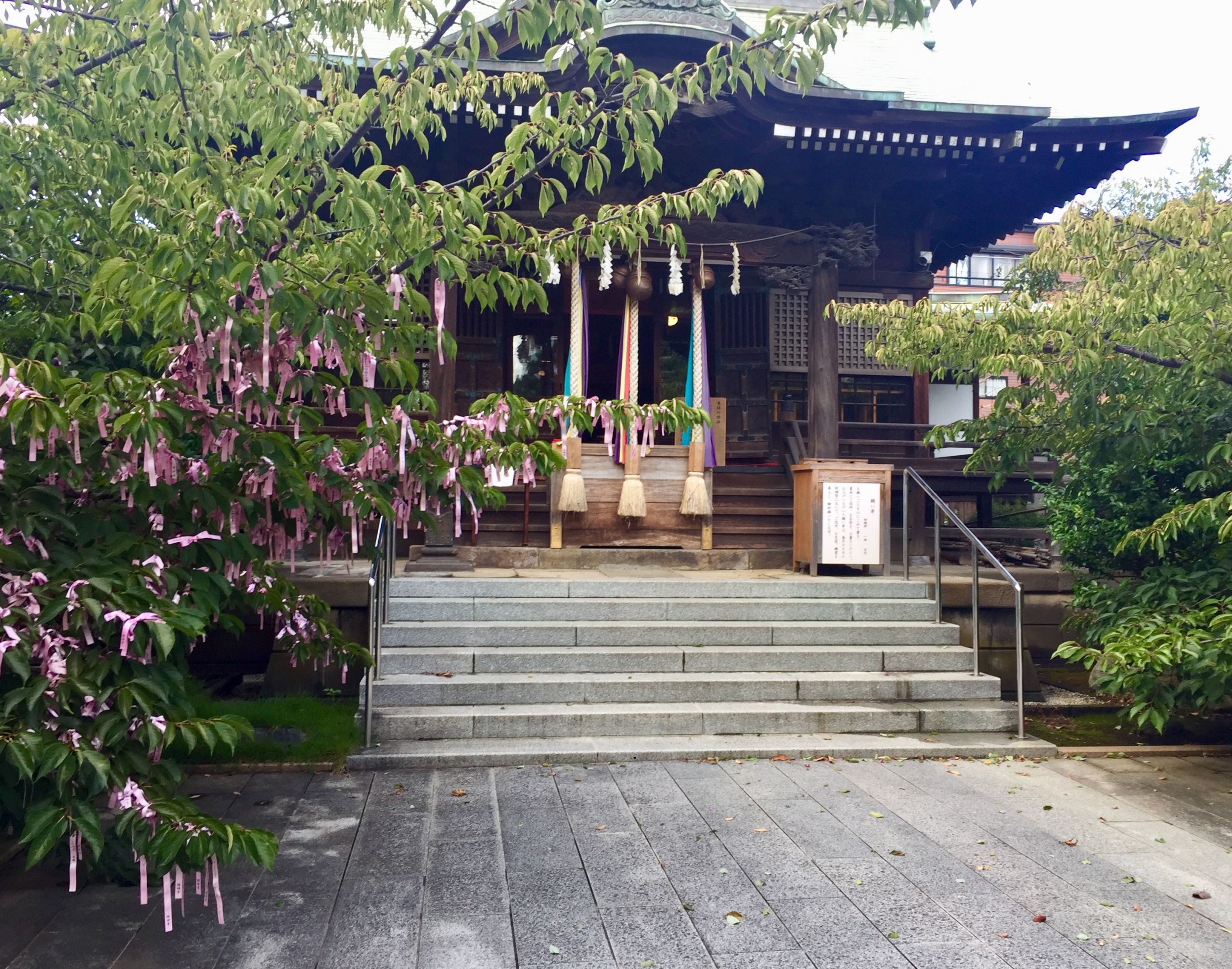 Sakura jinja is the head of Shinshu-kyo and offers a tranquil spot to reflect amidst the greenery.

In April the chinka shiki (fire-calming ceremony) is a ritual of purification that sees worshipers walk barefoot on red-hot embers. During September, the kugatachi shiki or yutate ceremony consists of the priest dousing themselves in boiling water using bamboo branches. The shrine grounds are particularly pretty in early spring as the sakura trees planted here are some of the first to bloom in Tokyo. The delicate sakura colours are eye-catchingly accented by pink ribbons, which are scrawled with personal prayers and tied to the trees’ branches by shrine-goers.

Before stepping on the train or taking the bus home, there’s a chance to pick up something special to snack on. Baumkuchen is the name of the game at Villon. This old-fashioned cake shop serves up a choice of mouthwatering baumkuchen: densely packed layers of sponge cake made kebab-style on a spit. Traditionally German, the Japanese version was introduced in 1917 by German confectioner Karl Juchheim, who came to Japan as a prisoner during World War I. Villon sells slices of the specialized cake in varieties of rainbow colors; some of them emblazoned with images of Sazae-san, others are artfully crafted in the shape of vases. The mid-priced circular cakes are a moist and moreish treat to take back home. 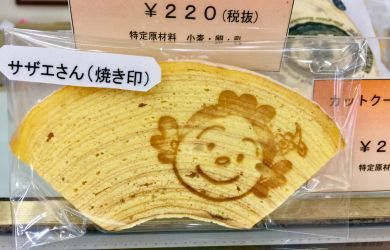 Sazae-san imprinted baumkuchen is a speciality at Villon bakery. 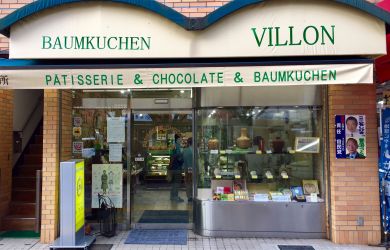 Villon is a bakery famous for their baumkuchen and pastries.

This after all, is the suburb —  intentionally designed as the new vision of Kanto living — that was the backdrop on which Sazae-san played out: the story of an outspoken, liberated modern woman in post-war Japan.

Returning back on the bus or the train, the connection of Sakurashinmachi to the origins of Tokyo’s development remains poignant. Maybe there aren’t the fancy houses or celebrities, but there is a sense of slower suburban life, an easygoing energy and an identity all of its own. This after all, is the suburb —  intentionally designed as the new vision of Kanto living — that was the backdrop on which Sazae-san played out: the story of an outspoken, liberated modern woman in post-war Japan.