Japan is no stranger to suicide and mental illness. While suicide numbers in the country have been on a steady decline in recent years, mental illness continues to permeate and remains a national concern.

TELL has been at the forefront of the movement in support of mental health within Japan’s international community since 1973. The non-profit organization offers English-language counseling both in person and via TELL’s anonymous telephone lifeline. Moreover, TELL organizes events that raise awareness for social issues related to mental health, safety, and wellbeing. 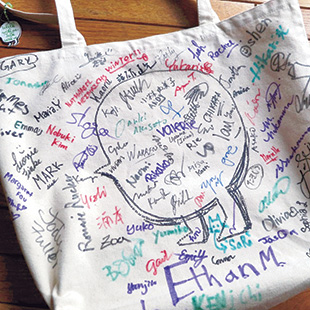 Last year, TELL launched its first Talkie Walkie event—a walk held on World Suicide Prevention Day, September 10, to raise awareness of mental illness and spread information on support. The first event, held at both Hibiya and Yoyogi Parks, was dedicated to Tohoku residents who have ended their lives as a result of struggling with the aftermath of March 11.

“World Suicide Prevention Day is held globally, and people everywhere [come] out in various countries and do events to raise awareness about suicide,” says TELL lifeline director Vickie Skorji, explaining that between 800,000 and one million people take their lives each year.

“For every person that takes their lives, there’s maybe four to ten people that are affected by it. And we know that those who are affected by it—and the closer they are—are at a greater risk for taking their own life later on. So by not addressing it and by this silence going on all the time, it’s a growing problem.”

This year, TELL is expanding beyond the borders of Tokyo, with Talkie Walkie events planned in Yokosuka, Osaka, and Kobe, under the theme of “Reaching Out and Saving Lives.”

“What we wanted to do was break out of just Tokyo, and break out of people coming and listening to a workshop,” Skorji says.

The Talkie Walkie this year allows people to either register with TELL to walk at a pre-organized event, or have their own walks. The walk’s focus will also be on building community and encourage interaction: each attendee will be given a free tote bag on which others can sign in marker pens; volunteers can collect signatures and connect with one another.

Of course, the event will also address the barriers in Japan that stand in the way of mental health support. The Talkie Walkie will commence with a discussion on the people that are most vulnerable to depression and the reactions to their conditions.

Skorji states that an important factor that needs to be changed is the propagation of information regarding suicide that’s spread in the media, citing jumping on train tracks and suicide in Aokigahara forest—“the Sea of Trees”—as examples of unhealthy coverage.

“We like to place a lot of attention on these places—and out of the 25,000 people that take their lives, it could be less than 600 that would die of these manners,” she confirms. “But we put them in the newspaper all the time, and we create a copycat effect, and we encourage people to die in this manner.

Of those in Japan who die of suicide, Skorji states that the elderly are the most vulnerable.

“They’re the most vulnerable because more often than not, they are more isolated, or they’re in rural areas, and we know those areas are more vulnerable. The family’s in the cities, and they’re feeling a burden; they’re not feeling valued, or maybe they’ve got health or pain issues, and they choose to take their lives in large numbers.”

There are also two other groups that are especially susceptible to depression and suicide: the young, who are affected by academic stresses, bullying, or hopelessness for the future; and men between 45 to 55 years old, who feel their sole worth is monetary, and if they lose their job, commit suicide for the payout of an insurance policy.

The walk also aims to offer people advice on how to identify and deal with others that might be depressed and contemplating suicide.

The primary sign is recognizing a significant change in someone or their behavior—poor sleeping or eating habits, social withdrawal, talking or drawing about suicide or death. If a person exhibits these signs, Skorji says they would benefit from someone reaching out and asking them how they are doing.

“I would also ask them, if they’re saying they’re not OK, ‘I’m concerned about you. I wonder, do you ever think about killing yourself?’ Put it out there.”

For those unable to attend the Talkie Walkie, TELL has other events underway. There are frequent music events that raise funds for the volunteer-run TELL’s operation, featuring local musicians and bands.

Above all, Skorji says the most important thing is working together.

“Half of the battle here is about the stigma and the shame attached to mental health. And the wording, and how we talk about it,” she states, continuing that people with other diseases such as cancer or diabetes aren’t shamed for their illness. Moreover, Skorji explains that suicide is the result of a struggle with a mental health problem.

“When someone has a mental health problem, they need support and we need to break down these barriers. The lifeline is there for them. The community needs to get behind it. We’ve got to change it. We’ve got to break this down and talk about it, and support people.

TELL Talkie Walkie for World Suicide Prevention Day. Sep 10. Walks in Tokyo (TELL and the U.S. Embassy), Yokosuka, Kobe, and Osaka. Register or learn more at www.tellwalkandtalk.com. For more info on TELL, visit www.telljp.com. If you need to talk, call the TELL lifeline at 03-5774-0992.

What Went Wrong at ‘Terrace House’?