The Sound of Their Own Drum

The musical geography of Tokyo has long been divided up by neighborhoods. You go to Koenji if you are looking for artists on the punk or experimental side. Shimokitazawa houses rock bands often flirting with the mainstream. Akihabara—idols. It may sound like overgeneralizing, but oftentimes it feels accurate.

Yet in 2017, those neat boundaries between styles seem to have dissolved. Ryotaro Aoki, vocalist and guitarist for the band Looprider, points to Koenji as an example. “Maybe 10, 20 years ago I would have said the ‘Koenji sound’ was punk or hardcore,” he says, following band practice in the very neighborhood we are discussing. “But after [live venue] 20000V burned down, I think it lost a center. Now Koenji is all over the place.” He and bandmate Sean McGee point to venues leaning towards shoegaze, visual-kei and even idol music as examples of this shift. Looking at the live house offerings of other districts, a similar trend emerges.

Looprider, a four-piece started by Aoki as a solo project a few years back that eventually grew to include McGee on drums, bassist Hideaki Usuki and guitarist Haruka Sato, is a band apt for this moment in Tokyo’s independent rock scene. Across three albums, the project has jumped between styles, dabbling in shoegaze on their first album, My Electric Fantasy, and diving into crusty hardcore on their sophomore release, Ascension. This refusal to stay in just one spot has now resulted in Umi, a single 25-minute-long-song featuring double drumming and sudden melodic shifts that has more in common with post-rock than what they’ve done before. If many indie outfits in Tokyo tend to fall in common patterns, Looprider’s latest opts to go in a completely different direction. 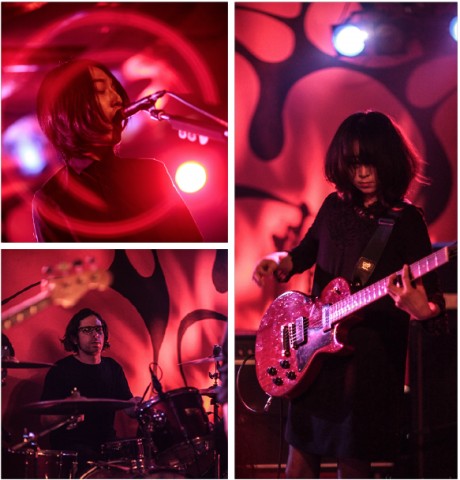 This desire to follow his own desires emerged after a previous band Aoki was in focused too much on a specific niche. After they broke up, he started Looprider, recording everything on his own until he felt comfortable with what he was creating. Then, he wanted to form a band. “I met Sean on the street … literally, on the street in Nishi-Ogikubo,” Aoki says on his first encounter with McGee. It was facilitated by Ian Martin, a music journalist and the founder of Call And Response Records, which puts out Looprider’s music. The two hit it off, and eventually decided to recruit a bass player for their full-length debut My Electric Fantasy.

“I put up ads looking for a bassist and guitarist,” Aoki says, and that’s how Usuki and Sato became part of Looprider. With the group settled, they tackled their most ambitious project yet: the 25-minute-song Umi. “I had always wanted to make a really long instrumental, experimental thing. It’s 25 minutes long because most bands in Tokyo, their live sets last that long. I thought it would be interesting to have a set where we play one song and we are done.”

Umi came together over a focused two week period, new for a group that previously worked in spurts. It was a new approach for Looprider, resulting in a bit of a learning curve. The addition of another drummer—something Aoki had long wanted to explore—also presented new challenges. “When we play, we are trying to make two parts work together,” McGee says.

The end result is one of the more intriguing releases to come from an independent Tokyo rock band in recent memory. Aoki can think of groups who have done concept albums—Umi boasts a loose concept about the origin of life and evolution, another departure for a group that previously said their songs don’t have intentional meaning—but can’t recall anyone else trying something like this.

Neither can I, nor can I think of one that managed to make one biggie-sized number sound (with its constant shifts) so intriguing. All too often, artists in Tokyo get bogged down in their own little corner of the city, playing shows to the same people and oftentimes settling on the same sounds. The situation is slowly changing, at least on a geographic front—areas of the city are open to different styles coming in, though artists favoring other genres might not be inclined to check out something outside their comfort zone. Looprider, especially with their latest, shows what can happen when one lets sonic borders blur. You come up with something genuinely novel and different.

Next challenge for them—making good on Umi’s central conceit and playing the whole thing live in one go. They’ll give it a whirl on March 29 at Shindaita Fever. Even if you aren’t big on the Setagaya scene, feel free to come out.