For Your Viewing Pleasure

YouTube is chock-full of great channels about Japan, and the list below describes some of the best. It is really just a starting point and is by no means a definitive or exhaustive list, so don’t be afraid to explore the recommended channels that pop up on each of these channels’ pages.

This one is kind of a cheat, since I’m recommending more than just a YouTube channel. Tofugu does a lot of great work; his channel includes dozens of great videos to help you learn the Japanese language and better understand the culture. But the fun doesn’t stop there: he also has a website with tons of great resources, including language-study apps.

The blog is also consistently excellent: I highly recommend the article “Bushido: The Way of Total Bullshi,” as it will challenge what you think you know about Japanese history. Tofugu is definitely someone you should be checking out if you want to accelerate your understanding of Japanese language and society.

There are a lot of Japanese makeup channels on YouTube, but few are as consistently creative as Fukuse Yuri’s. The 21-year-old puts out some typical videos of the genre: product recommendations, various challenges, and the like.

Where she shines though are in her “concept” videos, which include stylings based on everything from Tinkerbell to Marilyn Monroe. It doesn’t hurt that she has a unique face and chilled-out personality. Come for the wild makeup hacks; stay for the down-to-earth vibe that makes her endlessly watchable.

I’ll admit I’ve never been a big fan of the whole competitive eating concept. Nevertheless, there is something irresistibly charming about Yuka Kinoshita’s Ōgui eating channel. Just about every day, she puts out a video of herself eating some unique dish—generally something meant to feed about 10 people. Maybe it’s the little details that make it addictive.

Whether it’s the simple way Yuka films food preparation, her warm personality, her clear love of food for its own sake, or her adorable lisp; all of it is just so captivating that I cannot stop myself from checking in every few days to see what amazing feat of gluttony she accomplished recently. Even sweeter: her videos have English subtitles.

JPCMHD is a channel that collects the best of Japanese TV commercials and presents them on YouTube in HD. Even if you live in Japan and watch TV every day, there are some great ads you might’ve missed. The channel has been around a few years now too, so you can even go back in time and watch interesting commercials that are no longer on the air. It’s guaranteed to make you nostalgic for Japan whenever you’re away.

There are a number of good channels with videos of places in Japan. TSV is one of the best, because it’s one of the simplest. With TSV, you do not get a lot of fancy editing tricks or some pretentious soundtrack. There’s no narration or commentary of any kind. All you get is high-quality 4K videos of interesting locations in Japan. TSV lets the beauty of the Rising Sun speak for itself. Add your own music and commentary as needed. 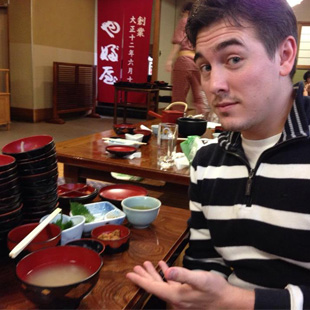 I stumbled across this channel while looking for information on the McDonald’s “chocofries” campaign. What I found was a pretty spot-on review from a delightfully irreverent British chap named Chris Broad. His channel, Abroad in Japan—see what he did there with the name?—is everything you want from a gaijin video blogger from England. Japanese language-learning advice? Check. Dry sense of humor? Check. Travel tips and interesting excursions? Check. Lessons on how to get dates? Check. Fairly jaded and snarky yet weirdly charming personality? Check. Broad manages to be helpful, funny, and dare I say somewhat lovable, all at once.

Only in Japan is one of the most varied and fun channels you will find about Japan on YouTube. Covering many facets of the culture, you’ll find videos on everything from Kyoto street food to volcanic sand baths.

The channel is the work of John Daub, an NHK reporter. True to NHK form, you can expect the videos to be well-produced, professionally edited, and a little corny in an endearing way. (The gong sound effect during the intro might be a little on the nose.) It’s a great channel to watch before coming to Japan to get ideas on interesting things to see and do. It’s also great for gaijin in Japan for the long haul, as you’re bound to learn something new. Definitely worth your time.

Hikakin is one of Japan’s most popular YouTubers. He, along with his pal Seikin, has a few different channels, including one focused on gaming. HikakinTV is a channel focused on his day-to-day experiences, as well as random product reviews.

The channel is all in Japanese with no English subtitles, unless you want to try YouTube’s auto-translated subtitles, which will take you on a surreal linguistic journey beyond your wildest dreams. So, that may be a deal-breaker for a lot of folks. Still, it’s worth checking out to get a sense of Japanese internet culture and to enjoy some silly humor. His gaming channel also features some priceless moments of Minecraft, if you’re into that sort of thing.

The NHK YouTube channel is a fantastic resource. An unassuming channel with not many views, NHK YouTube has literally thousands of short news videos that can keep you up-to-date if you’re out of the country or don’t have a TV. It’s updated very frequently, and is easy to watch on a smartphone or tablet when you’re on the go. Personally, I found the channel to be a great language-learning tool, as NHK is really good about their Japanese subtitles. 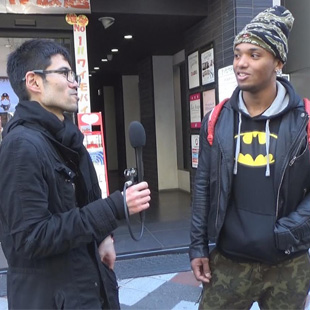 Yuta is a very cool bilingual Japanese guy who’s been doing fantastic street interviews for a few years now. He talks to regular Japanese folks, in Japanese, and gets their genuine opinions on all sorts of issues. His videos cover everything from dating to race to Japanese customs.

Yuta did a great video recently about “whitewashing,” where he asked Japanese people what they thought about Scarlett Johansson playing Motoko in the forthcoming Hollywood adaptation of Ghost in the Shell. (Definitely a must-watch for non-Japanese people who were offended by the casting of a non-Japanese person for this role.) Yuta also does some fun social experiment videos, and even offers free Japanese lessons that you can get by e-mail. Yuta is a bro.