The DyEing Art of Kappazuri

The story of this book’s creation begins last summer. In July, en route home to Tokyo from a trip to Kazakhstan and Zurich, I stopped by New York to visit my family. Since living in Tokyo from 1955, I have had many different jobs. I was first enrolled in military service during the Korean War, then I was a scholarship student at Todai, and after I was part of the Diplomatic Service working in Yokohama, Sapporo, Tokyo and Kyoto. In 1977, I became an art dealer, and have since become the largest publisher of contemporary Japanese graphic art, selling around the globe ever since.

July is definitely not New York’s finest season and I was soon stifled by the unbearable heat. Then, in a sudden rush of fondness for my favorite (and only) grandson Lucas, I suggested that instead of hiding from the hot weather with a long, boring summer at the tender age of sixteen, how about visiting Tokyo? To my delight, he accepted immediately. He has fond memories of Tokyo from when he used to live there as a young boy from 2007 to 2012, and he was more than keen to take up his grandfather’s invitation. 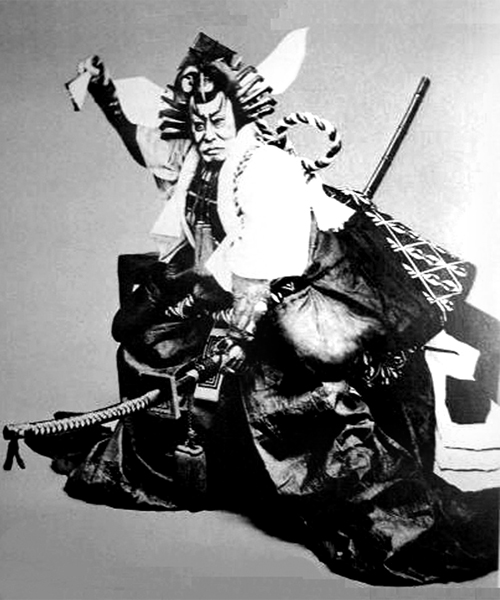 Classical Japanese theater, or kabuki, is known for its dramatic makeup and dynamic acting.

I sensed from the outset that spending a good amount of the summer without “a project,” the completion of which would indicate some progress in his life, would be a great waste of his time.

I introduced Lucas to the wonderful world of Hiromitsu Takahashi’s prints. They are vivid pieces showcasing exciting moments in kabuki (traditional Japanese dance-drama) plays complete with fascinating costumes and actors that strike unbelievable poses. They are called kappazuri prints and Lucas was not familiar with them at the beginning. With great effort, however, he expanded his knowledge to the point that his research provided him with enough knowledge to actually make an amazing book all about kappazuri prints.

I explained to him that no one really knows much about these prints. I re-introduced Lucas to Hiromitsu Takahashi, who has produced some 300 works for my gallery in the 30 years that I’ve known him. All of my staff were patient and helpful, particularly Shin Mochizuki, who worked as Lucas’ translator and deserves particular credit for his ceaseless and patient dealing with the answering of so many questions and coming up with the right answers. 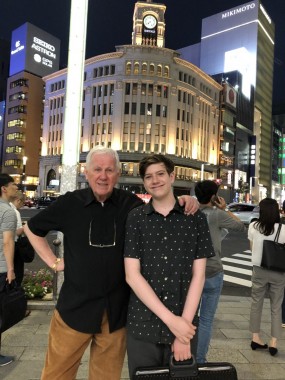 As I watch from my own vantage point, I have found that these interesting prints always excite the viewers. But, I have also noticed that the lack of background information about what is actually going on in each print tends to cause viewers to lose interest since they sometimes cannot fathom who is doing what to whom and why. This absence of general information sometimes causes even a would-be enthusiastic art lover to falter. However, there is no doubt in my mind that the readers of Lucas’ book will gain great pleasure viewing the three dozen prints covered in his book.

As a proud grandfather, and with the help of a few of Lucas’ friends and fans, we have backed the publication of my clever grandson’s book, “The DyEing Art of Kappazuri.” Within the book, Lucas tells the story of the prints with a clear explanation of the action of each one. He also gives information about how to make a kappazuri print and has also provided background information about the career of Hiromitsu Takahashi.

The exhibition of the book will be held from April 2 – 5 at Sogetsu Kaikan in its Kenzo Tange-built edifice and shown in the Isamu Noguchi room, Heaven. Viewing hours will be from 10am – 5pm. The prints contained in the book, “The DyEing Art of Kappazuri” will all be for sale. Since the edition numbers of Takahashi’s work are small, those interested in certain prints shown in the book should plan to come early.

*The event has been cancelled due to the ongoing situation with the coronavirus.*